Skip to content
We are using cookies for a better user experience.
06/14/21
Neuburg a. d. Donau
Sport

Home round for Audi in Formula E in Mexico 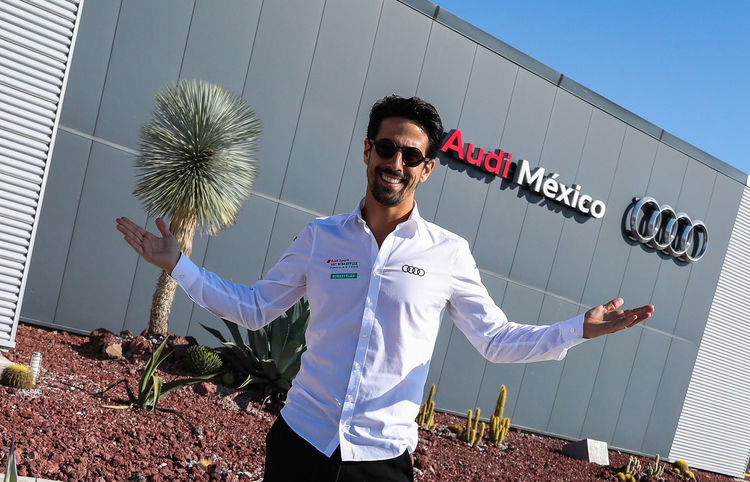 Formula E will begin the second half of its season with two races in Mexico this weekend (June 19/20). For Audi Sport ABT Schaeffler, the appearance in Puebla will be a home round: Just under an hour’s drive away is the Audi Group’s youngest plant with its 5,000 employees, who are enthusiastic about Formula E.

“The interest and enthusiasm for Formula E is huge in Mexico,” says Lucas di Grassi. Before the last appearance in February 2020, the Brazilian spent a day visiting the San José Chiapa plant, meeting many employees, signing autographs and giving interviews. “It was nice to see everyone there supporting our team. We always felt very welcome there,” says di Grassi. After five races at the Autódromo Hermanos Rodríguez in the heart of Mexico City, Puebla is now the venue for the first time.

Formula E has started in Mexico every year since the second season and no other team has been more successful there than Audi Sport ABT Schaeffler: The squad has already won the race in seasons three, four and five. Daniel Abt’s first-ever Formula E victory in 2018 and probably the most dramatic finish in Formula E history to date remain unforgotten: In 2019, Lucas di Grassi overtook Pascal Wehrlein, who had been leading for a long time, in the final meters before the finish line and triumphed after a tactical masterstroke.

Now the cards will be reshuffled: The venue for the eighth and ninth races of the season is a short 2.982-kilometer circuit at the Autódromo Miguel E. Abed. In addition to the medium-fast sections in the infield of the oval, the layout of the Formula E variant also includes a steep banking. Neither Lucas di Grassi nor his teammate René Rast have contested a race in Puebla before, so all that remained before the start of the second half of the season was preparation in the simulator.

“Puebla is completely new territory for me,” says René Rast. “That makes it all the more important to arrive as perfectly prepared as possible so that we can focus on qualifying and the race in practice. We know about the strengths of our package, but to finish on the podium or even fight for victory, we need a grid position within the top five. That’s got to be our goal in Mexico and in all of the coming races.”

As with all the remaining race weekends in New York, London and Berlin, there will be two races in Puebla. The start time is set for 4 p.m. local time (11 p.m. CEST) on both Saturday and Sunday. As recently in Monaco, spectators will be returning to the grandstands in Mexico, albeit still in reduced numbers to comply with all of the hygiene regulations. All of the international broadcasters, including broadcast times, can be found online at www.fiaformulae.com.

At the Audi plant in San José Chiapa, which was built on an area of 460 hectares, a good 5,200 employees produce the Audi Q5 in all of its variants and for all of the world markets. The site, which opened in 2016, is characterized by ecological, social and economic sustainability and is actively shaping the future of the region. Since 2020, the plant has covered 100 percent of its total electricity requirements for production with renewable energy sources. It is a further step on the way to CO2-free production, which is to become a reality by 2025.

In addition to the Audi Sport ABT Schaeffler factory team, the Envision Virgin Racing customer team is also fighting for points with the e-tron FE07 developed by Audi. This season, Nick Cassidy and Robin Frijns are competing for the British squad which, like Audi Sport ABT Schaeffler, has been a member of the Formula E family since the first race in 2014. With two second places in Diriyah and most recently in Monaco, Robin Frijns is leading the overall drivers’ standings before the eighth race.