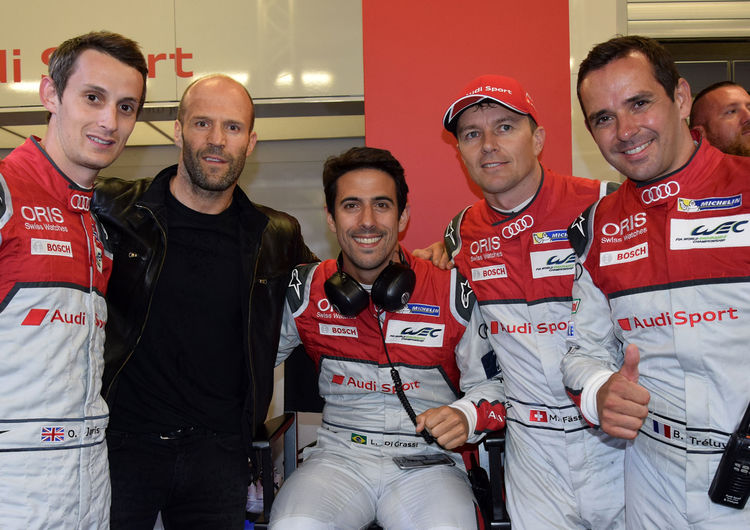 Hollywood stars in the pits, the new Audi TT RS on the race track, Mattias Ekström in the rallycross Audi and many other thrilling moments: off the race track, there was a lot going on at the Le Mans 24 Hours as well.

Jason Statham is a guest of Audi’s at Le Mans

A touch of Hollywood at Le Mans: In the garage of Audi Sport Team Joest, action hero Jason Statham watched the start of the Le Mans 24 Hours for which Brad Pitt officially waved the flag. The night before, Keanu Reeves had received an exclusive tour of the Audi garage by Le Mans record winner Tom Kristensen. Other guests of Audi’s watching the 84th running of the iconic French endurance race included actors Mathieu Kassovitz and Riccardo Scamarico, actress Valeria Solarino and singer Andreas Bourani.

Adrien Tambay took a brief trip to Le Mans on Thursday to wish his fellow drivers from the WEC good luck for the race and to gather a few current impressions himself. At a Le Mans event held this weekend at the newly opened Audi City Paris on Place du Marché St-Honoré, he shared them with the guests there, as did Nico Müller, Edoardo Mortara and Mike Rockenfeller at the Audi Cities in Berlin, Beijing and Moscow.

The UEFA European Championship was a hot topic at Le Mans too. André Lotterer together with most of the mechanics of Audi Sport Team Joest kept his fingers crossed for the German team in the match against Poland. During the numerous interruptions of the qualifying session on Thursday the opportunity to watch the match live on television for a few minutes behind the garage even presented itself.

Benoît Treluyer and Loïc Duval previously witnessed the 2-0 victory of their Équipe Tricolore against Albania on Wednesday and Marcel Fässler was watching his compatriots play against Romania in the match that ended in a 1-1 draw.

In 2007, Mattias Ekström was driving an Audi R10 TDI on the test day at Le Mans. In 2008, he won the DTM race at Circuit Bugatti. Now the Swede returned to Le Mans with a new mission. During the 24-hour race he took guests for a ride in his near-600-hp Audi S1 EKS RX quattro from the FIA World Rallycross Championship. “Anyone who’s ever been a passenger in our S1 knows why our hashtag is #welovequattro,” says Ekström.

A new experience for Tom Kristensen: The record winner of the Le Mans 24 Hours for the first time served as an expert to the television channel Eurosport in the pit lane at the classic French endurance race. Beyond this commitment “Tom K.,” as usual, had an extremely busy schedule at Le Mans again.

Besides the Audi R18, the new Audi TT RS caused a stir at Le Mans. Journalists were given an opportunity to personally try out the 400-hp flagship of the TT model range on the Le Mans race track. There were two other premieres: for the first time, a group of journalists was allowed to practice a pit stop on an Audi R18 and at the Audi Arena, guests together with Audi Sport assembled a V12 TDI engine of the Audi R10 TDI that was victorious in 2006, 2007 and 2008.

This year, Audi again provided the Official Cars during the Le Mans 24 Hours. The Audi R8 Safety Car unexpectedly became a principal performer on Thursday night. Four-time Le Mans winner Yannick Dalmas thrilled the fans during an interruption of the qualifying session in pouring rain with a spectacular drift. The short video has since been virally spreading on the internet and is perfect advertisement for the Audi R8’s quattro drive.

Concurrently with the “real” Le Mans 24 Hours, Audi of America is hosting a virtual Le Mans race in San Francisco. In the “24 Hours of Le Forza” some of the best race gamers in the United States are pitted against each other in a “Forza Motorsport 6” simulation. The race is streamed live on www.twitch.tv with commentary provided by Dion von Moltke, who in 2013, won the GTD class of the 24-hour race at Daytona in the Audi R8 LMS. Under the hashtag #AudiLeForza the racing action can be watched in social media.

Employees of Audi Sport in their free time again organized an Audi Sport Camp this year for colleagues and partners during the Le Mans 24 Hours. About 550 guests used the opportunity to spend the night in the tent and motorhome camp near the paddock, to watch the race and to party. A highlight at the gathering was the performance of the house band of Audi driver Marcel Fässler who personally visited the Audi Sport Camp and patiently fulfilled all wishes for autographs.

One of the highlights at the Audi Arena at Le Mans was the new Audi Sport e-tron mountain bike that is now available in a limited edition of 100 bikes, each selling for 15,300 euros. Tipping the scales at merely 18.2 kilograms it is one of the world’s lightest e-mountain bikes.

Dindo Capello celebrated his 52nd birthday at Le Mans on Friday. During the traditional visit to the Danish camp together with his former teammate Tom Kristensen, the Italian was appropriately celebrated. Capello worked as a spotter for Audi Sport at Le Mans. The other Audi Sport Ambassadors – Frank Biela, Emanuele Pirro and Marco Werner – were active for Audi in various ways at Le Mans as well.

In the Audi R8 from Germany to France

Nearly 50 Audi R8 cars did a lap around the famous “Circuit des 24 Heures” before the start of the Le Mans 24 Hours. Audi Germany had invited R8 customers for a rally to France.