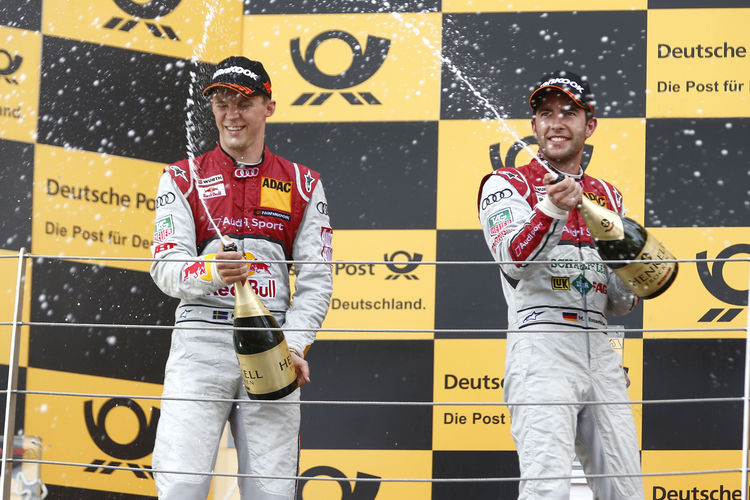 Historic success for Audi: At the first Russian DTM race in history, Mike Rockenfeller (Audi Sport Team Phoenix) and Mattias Ekström (Audi Sport Team Abt Sportsline) caused a one-two Audi victory in front of an impressive crowd of 45,000 spectators (throughout the weekend). Rockenfeller, on clinching his second success of the season, managed to extend his lead in the overall standings to 27 points.

A perfect day for Audi at Moscow Raceway: On the new DTM race track around 80 kilometers north-west of Moscow, Mike Rockenfeller in the Schaeffler Audi RS 5 DTM and Mattias Ekström in the Red Bull Audi RS 5 DTM commandingly set the pace right from the start. After 74 laps, the two Audi drivers had more than a ten-second advantage over the BMW of Augusto Farfus, who just barely managed to save third place on crossing the finish line ahead of Adrien Tambay in another Audi RS 5 DTM.

“Obviously, this was a really big step in the Championship today,” said a jubilant Mike Rockenfeller after the race. “It’s great having won here at the DTM’s premiere in Russia. It was a similarly perfect race as at Brands Hatch: starting from the pole position and finishing in first place. My Audi RS 5 DTM was fantastic and Team Phoenix did a superb job. At the Norisring, I was too slow but here everything fit together.”

Rockenfeller started on softer option tires and, running at the front of the field, set consistently fast times for 45 laps before switching to the standard tires. At the beginning of the race, Ekström, who was running on the harder tires, managed to keep the BMW of Augusto Farfus, who had started on option tires as well, at bay. The Swede thus laid the foundation for the historic Audi one-two victory.

Five Audi RS 5 DTM cars in total finished at the DTM’s Russian premiere in the points, including all four cars of Audi Sport Team Abt Sportsline. A strong race was driven as well by youngster Adrien Tambay, who in the Audi ultra RS 5 DTM pushed forward from position twelve on the grid to fourth place, drove the fastest race lap and scored his first points this year. Jamie Green in the Red Bull Audi RS 5 DTM only lost fifth place to Mercedes driver Gary Paffett shortly before the end. Timo Scheider (AUTO TEST Audi RS 5 DTM) from 14th on the grid advanced to ninth place and thus finished in the points as well.

Filipe Albuquerque in the Audi Financial Services Audi RS 5 DTM of Audi Sport Team Rosberg in position 13 missed a top-ten result by just three seconds. His team-mate Edoardo Mortara was hit by a rival on the starting lap and dropped to the end of the field. After 31 laps, he parked his damaged Playboy Audi RS 5 DTM in the pits.

The race of Miguel Molina (Audi RS 5 DTM), who after an unfortunate collision with title defender Bruno Spengler was forced to retire on the sixth lap, ended early as well.

Still, for Dieter Gass, Head of DTM at Audi Sport, the DTM’s premiere in Russia could “hardly have gone any better”: “A one-two victory, five of our cars in the points and now a clear lead of the standings for Mike Rockenfeller, who just like Mattias Ekström drove an absolutely perfect race despite the fact that both drivers repeatedly encountered traffic. The race took place in front of a great crowd and the Audi RS 5 DTM was clearly the strongest car here at Moscow Raceway, and superb teamwork played a role as well in our having achieved a brilliant result for Audi.”