‘Heavy’ task for Audi at the Norisring

{{ activeItem() }}
Twitter
01/18/20
RT @audisport: “It’s like the Matrix!” @Daniel_Abt and @LucasdiGrassi are hunting for treasure in the world of VR before the @FIAFormulaE S…
01/18/20
Race times and broadcast schedule for today. The lights go green at 20:04 CET (16:04 local time). More info &gt;&gt;… https://t.co/cbRsB1Joxr
01/18/20
RT @audiformulae: Follow @audisport for all of our latest @FIAFormulaE news. We will be closing this @audiformulae team channel after the S…
01/18/20
First free practice session of the year done. Solid start on a very dirty and slippery track with a lot of traffic.… https://t.co/ln06K3Uvt7
Audi Sport on Twitter
{{ activeItem() }}
Facebook
01/17/20
“It’s like the Matrix!” Daniel Abt and Lucas Di Grassi are hunting for treasure in the world of VR before the ABB Formula E Santiago E-Prix. Check it out. >> audi.com/FormulaE #PerformanceIsAnAttitude #SantiagoEPrix
01/15/20
Full speed to the first ABB Formula E race of 2020: the Santiago E-Prix on Saturday, February 18. >> audi.com/FormulaE #PerformanceIsAnAttitude #SantiagoEPrix
01/14/20
Don‘t miss out as Formula E goes full throttle this season. #PerformanceIsAnAttitude
01/13/20
Kicking off 2020 for Audi Sport customer racing with podiums in Dubai: TCR class victory for the Audi RS 3 LMS and two overall podiums for the Audi R8 LMS. Well done to our customers in the rain-shortened Dubai 24 Hours. >> audi.com/GT3 >> audi.com/TCR #PerformanceIsAnAttitude
Audi Sport on Facebook 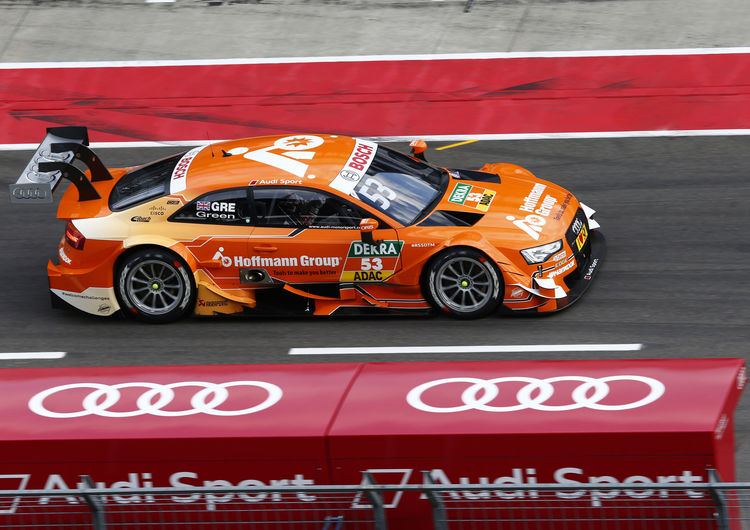 The ‘home round’ for the four rings at the Norisring is linked with an aim that will only be achievable with a ‘heavy’ effort. In Nuremberg – only some 90 kilometers away from the headquarters in Ingolstadt – the Audi squad is set on continuing its winning streak in the DTM and clinching its seventh consecutive triumph on June 27 and 28.

Audi has not been beaten in the internationally popular touring car racing series in nine months. The two Audi drivers Mattias Ekström (S) and Jamie Green (GB) have each won three of the last six DTM races for Audi. Now there is an event on the calendar that suits both of them particularly well: the Norisring. The leader of the drivers’ standings, Jamie Green, has already celebrated four victories in Nuremberg and finished as the runner-up last year. Mattias Ekström has frequently been on podium at the Norisring and in 2013 crossed the finish line in his Red Bull Audi RS 5 DTM in first place, but was retroactively taken out of the classification.

“I’ve had some unfinished business in Nuremberg ever since,” says the two-time DTM Champion, who did tests with the Audi RS 5 DTM at the Lausitzring last week. “There’s no doubt about it: I’d finally like to win at the Norisring. It’s cool that this year we even have two opportunities and that the many Audi fans are already treated to a DTM race on Saturday – plus another one on Sunday. With the retro livery of my Red Bull Audi RS 5 DTM, victory can be the only aim anyhow.” On the occasion of the victory clinched in Audi’s debut at the Norisring 25 years ago, Ekström will be racing in the colors of the 1990 Audi V8 quattro in Nuremberg.

Jamie Green can hardly wait to be sitting at the wheel of his Hoffmann Group Audi RS 5 DTM and defending his lead of the standings as well. “With three victories in the first four races, I managed a dream start to the season,” says the Briton. “Now, the Norisring, one of my favorite tracks that I’ve always been able to handle particularly well, is coming up. Obviously, it’s not going to be easy for us because we have to start with a lot of additional weight. But the RS 5 DTM fits my driving style so perfectly this year that we should be in contention for victory in spite of this.”

Due to the success in the first four races of the current season the eight Audi RS 5 DTM cars will have additional weight on board at the Norisring, as required by the regulations. As a result, Audi will have the heaviest cars in the field. The race cars of Mike Rockenfeller and Edoardo Mortara, each tipping the scales at 1,140 kilograms – 35 kilograms more than the lightest cars of the competition – will have the highest weight.

“Of course, having to start with so much additional weight in our home race at the Norisring of all places hurts us, but that’s the way the regulations in the DTM are,” says Dieter Gass, Head of DTM at Audi Sport. “We won’t be the favorites at the Norisring to be sure. We’re going to leave no stone unturned to deliver a tremendous show to the traditionally large crowd of Audi fans in Nuremberg.”

The DTM’s only city street circuit is located only about 90 kilometers north of Audi’s headquarters in Ingolstadt. The race and the extensive supporting program attract a large number of guests to Nuremberg every year. Hans-Joachim Stuck will be doing some demo laps on the Norisring in his 1990 winning car and the new Audi Sport TT Cup will be making its second appearance as part of the DTM with interesting guest drivers like Albert von Thurn und Taxis, Pierre Casiraghi and Doreen Seidel.

The first free practice session of the DTM will be held on Friday afternoon, June 26. The two races will start on Saturday, June 27, at 16.48 and on Sunday, June 28, at 15.18. ARD will start airing live coverage on Saturday at approx. 16.35 (CEST) and on Sunday at approx. 15.00 on ‘Das Erste.’ Additional live streaming will be available on www.dtm.com/live, www.sportschau.de and www.bild.de.

Tickets for the race at the Norisring are available on www.audi-motorsport.com.