Skip to content
We are using cookies for a better user experience.
09/18/21
Neuburg a. d. Donau
Motorsport 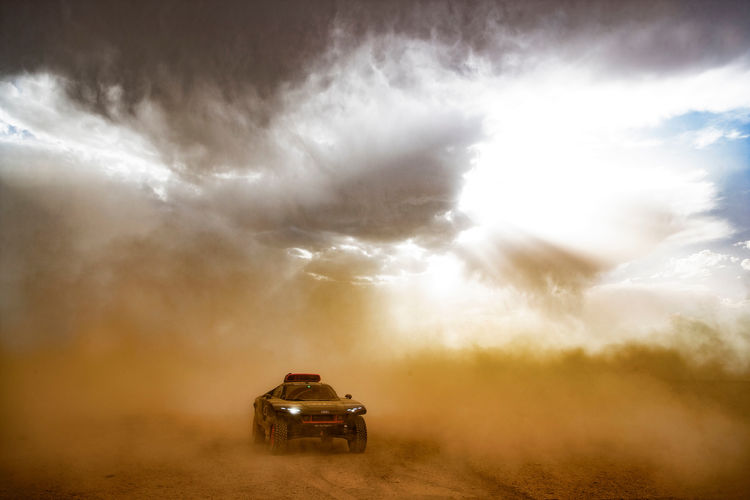 On the way to its debut in the famous Dakar Rally in January 2022, Audi Sport has tested the Audi RS Q e-tron for almost two weeks in Morocco under the most extreme conditions.

After testing in Germany and Spain, the team headed for the desert and the dunes for the first time in the heat of Morocco. Once again, all three driver crews were involved. Dakar record winner Stéphane Peterhansel, Carlos Sainz and Mattias Ekström took turns at the wheel of the highly complex prototype.

Of course, their co-drivers Edouard Boulanger, Lucas Cruz and Emil Bergkvist were always with them. Driver and co-driver form an important unit in the Dakar Rally and they have to feel comfortable in the cockpit. “This was one of many topics we had on our to-do list after the test in Zaragoza,” says Andreas Roos, responsible for factory motorsport projects at Audi Sport. “For the test in Morocco, we made modifications so that the driver and co-driver have more space in the tight cockpit and can also communicate better with each other. The feedback was positive.”

Some of the conditions the test team encountered in Morocco were extreme. “The thermometer climbed to well over 40 degrees Celsius at times,” says Sven Quandt, team principal of Q Motorsport. “Sandstorms also hampered the testing. In addition, as expected, some new problems arose in the high temperatures, which repeatedly caused interruptions to the testing and needed to be solved before the next test.”

“We expect much lower temperatures at the Dakar Rally,” says Andreas Roos. “Nevertheless, we deliberately went to Morocco to test our concept under the most extreme conditions. Components such as the MGU, for example, were basically not developed for use in such high ambient temperatures, but the drivetrain and other components were also pushed to their limits or even beyond by the heat. The insights we gained in Morocco are invaluable, but they also show us that we still have a lot to do before the Dakar Rally and there is not much time left.”

The high-voltage battery, which was developed specifically for the Dakar Rally, is also a major topic. “It’s all about optimum temperature management and being able to call up the battery’s maximum performance,” says Roos. “This is where we are learning with every test. And that’s exactly why we are going to the desert with an electrified drivetrain: We are gaining an incredible amount of experience that we are sharing with our colleagues from road car development.”

The Audi RS Q e-tron features an electric drivetrain with two motor-generator units (MGU) from Formula E. The high-voltage battery, newly developed by Audi Sport, is charged while driving via an energy converter consisting of an efficient TFSI engine from the DTM and another third MGU.

Parallel to the test, Audi Sport in Neuburg an der Donau already started building the first car intended for competition with chassis number 104. “The test car is a prototype wherein not everything was a perfect fit yet,” says Benedikt Brunninger, Audi Sport Project Manager for the Dakar Rally. “In the case of the actual competition cars, we’re aiming for absolute perfection in terms of accurate fit.”