Halftime in the Audi Sport TT Cup at Zandvoort

Links
{{ activeItem() }}
Twitter
05/14/21
MEDIAINFO: 23 race cars from Audi Sport on two ADAC racing platforms &gt;&gt; https://t.co/lkRiEyXwTy… https://t.co/0LhtaiMbYn
05/14/21
[1/2] Wishing good luck to the Audi teams this week: 🇩🇪 ADAC @GTMasters at @MotorspArenaOC 🇩🇪 ADAC GT4 Germany at… https://t.co/5PiGe2pbN6
05/13/21
The next chapter of our #24hNBR history: the endurance classic in 2014. Crossing the finish line to win the race fo… https://t.co/hX31aOhn0y
05/10/21
Victories for the Audi R8 LMS in Europe &amp; Australia were just some of the highlights for our customers worldwide du… https://t.co/opbSgKfmkw
Audi Sport on Twitter
{{ activeItem() }}
Facebook
05/13/21
Looking back on the next chapter of our history at the ADAC TOTAL 24h-Rennen Nürburgring. Together with Christopher Haase - Fanpage, join us as we relive the race in 2014, which resulted in a faultless victory and a new race distance record. #PerformanceIsAnAttitude #24hNBR
05/10/21
Victories for the Audi R8 LMS in Europe and Australia were just some of the highlights for our customers worldwide during the most recent race weekend. Well done to all! 🇫🇷 🇦🇺 🇸🇰 🇩🇪 🇳🇴 🇳🇿 🇨🇳 🇧🇷 🇧🇪 🇮🇹 >> audi.com/GT3 >> audi.com/GT4 >> audi.com/TCR #PerformanceIsAnAttitude
05/08/21
From the back and into the points for Lucas Di Grassi in Monaco: Lucas moved forward from 17th to score a point in 10th, while René Rast’s kiss with the wall unfortunately ended his race. Up next: Puebla in Mexico from June 19–20. >> audi.com/FormulaE #FutureIsAnAttitude #MonacoEPrix
05/08/21
RACE DAY in Monaco, the first time that ABB Formula E is running on the full-length circuit. Don’t miss today’s Monaco E-Prix at 16:04 CEST. >> audi.com/FormulaE #FutureIsAnAttitude #MonacoEPrix
Audi Sport on Facebook 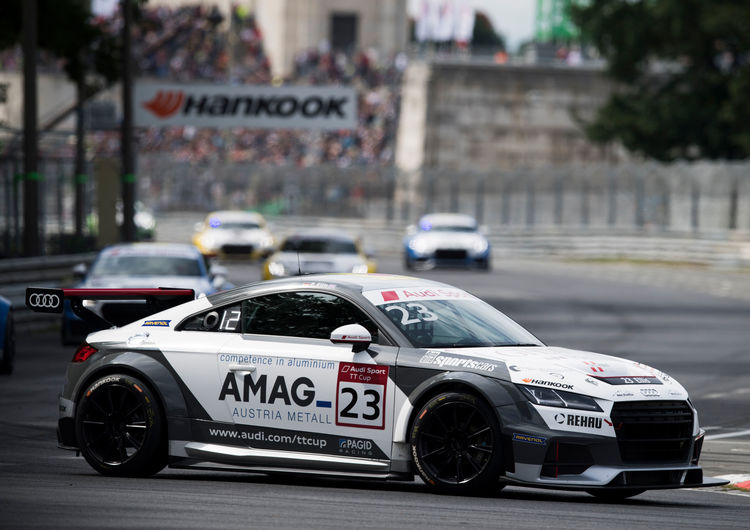 The circuit of Zandvoort in the Netherlands is the backdrop for the fourth of seven Audi Sport TT Cup events. As a challenging driver’s circuit, it traditionally promises exciting racing.

All in pursuit of Philip Ellis: Tensions are high for the halfway point of the Audi Sport TT Cup season in Zandvoort from August 18 to 20: After three victories, the Briton Philip Ellis has occupied the top of the table since the very first race. However, his pursuers have begun to catch up in great leaps. Mikel Azcona climbed from seventh to second on the table after the previous race weekend at the Norisring. The Spaniard made his ambitions known in the title fight with two victories in Nuremberg, and he currently sits 33 points behind the leader. 50 points are up for grabs every weekend. Just one point behind Azcona follows Milan Dontje. The Dutchman, who stood on the podium twice in the previous three races, will be buoyed by the support of his many local fans at his home race. Tommaso Mosca has also made a stronger and stronger impression: the Italian stood on the podium for the first time in his motor racing career with a second place in Nuremberg. He is fourth on the table in front of the Pole Gosia Rdest, the fastest woman in the field. Mosca also leads the rookie rankings of the Audi Sport TT Cup. The Italian from Brescia has a five-point advantage over the Swiss Yannik Brandt. The third best newcomer is Keagan Masters from South Africa, who just like Fabian Vettel has so far collected 48 points.

Second victory of the season in Sweden: Jan Brunstedt celebrated his second victory in the third race weekend of the Swedish GT Championship after having won in Falkenberg in July. The Swede triumphed a month after his 68th birthday on the race track of Karlskoga in an Audi R8 LMS ultra. He prevailed on Saturday’s race with a 20-second advantage. After three from five race weekends, Brunstedt is fourth on the table, just eight points off the lead.