Grid positions one and two for Audi in Bahrain 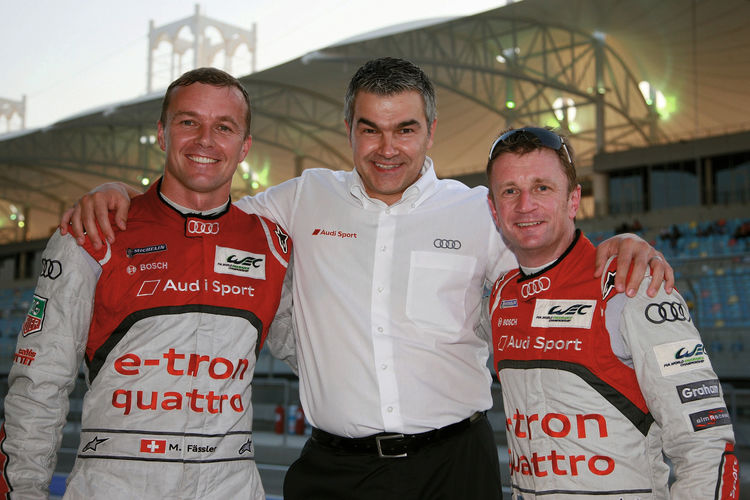 High suspense at the sixth round of the FIA World Endurance Championship (WEC): Allan McNish (pictured right next to Marcel Fässler and Dieter Gass) achieved the best time in qualifying on the Sakhir track on his return to the Audi R18 e-tron quattro.
Download PDF (171 KB)
Facebook
Twitter
LinkedIn
WhatsApp

High suspense at the sixth round of the FIA World Endurance Championship (WEC): Allan McNish achieved the best time in qualifying on the Sakhir track on his return to the Audi R18 e-tron quattro.

The Scotsman shaped the qualifying session in Bahrain right from the first minute: On his second lap, Allan McNish topped his own best time from the first attempt by improving it by another 27 hundredths of a second. Further into the session, nobody was able to improve the time of the works driver in the number “2” e-tron quattro. Nicolas Lapierre in the Toyota had to admit defeat by 0.440 seconds and was initially placed in second position.

For the number “1” Audi R18 e-tron quattro, qualifying turned into an unexpected thriller. The team of the Le Mans winners waited for a long while before going out for the first time. When Marcel Fässler on his first lap hit a bollard that came to rest behind him on the middle of the track, race control interrupted the qualifying session. With cooled down tires, the Swiss went out on his next lap and initially qualified in third place, trailing his team-mate by 1.159 seconds. On his last lap, he managed to make a strong recovery. With 1m 45.888s, he reduced his deficit to McNish to only 74 thousandths of a second. That completed the front row for Audi. For the brand with the four rings, this marked the fifth event after Sebring, Spa, Le Mans and Silverstone in which Audi set the fastest time this season. The last time that two Audi sportscars were on the front row was at Silverstone on August 26.

With air temperatures of 34 degrees and track temperatures of 41 degrees centigrade, the conditions were extreme even in qualifying. On the desert track in Bahrain, which takes a tremendous toll on the brakes, the drivers and cars will endure extreme conditions in the six-hour race on Saturday. The sixth WEC round starts on Saturday at 16:00, local time (15:00 CEST) and can be watched live on the internet: www.audi-liveracing.com will broadcast the entire race.

Dieter Gass (Head of Racing Commitments): “I’m very pleased with the front row. Both R18 e-tron quattro cars are on the top positions. For Allan, the pole position on returning to this car is a nice reward. But it is for the squad as well that has invested so much work into converting the ultra into a hybrid vehicle. There really couldn’t be a nicer reward than today’s top spot. As far as the race is concerned, we’re well set. We could see in the free practice sessions over longer runs that we’re achieving good consistency. Tomorrow will confirm whether or not our work on improving tire consistency is paying off.”

Ralf Jüttner (Technical Director Audi Sport Team Joest): “I’m very happy with the result. Both cars are on the front row of the grid – and with just a really narrow gap between them. It doesn’t happen very often that we go out so late in qualifying. But that’s exactly what Leena Gade did today with her number ‘1’ car. The subsequent interruption was caused by Marcel himself when he knocked over the bollard in turn 1. That made things a little more difficult for him. I’m a bit surprised because I expected Toyota to be quicker in qualifying here. But of course we’re happy about the front row. The pole position is a nice reward for the work done in the past few days.”

Tom Kristensen (Audi R18 e-tron quattro #2): “A superb qualifying performance by Audi and of course by my team-mate Allan (McNish). It’s nice that we’re on position one with the e-tron quattro. The squad delivered a fantastic performance in this week of intensive work. They converted the car in Bahrain in outside temperatures of more than 30 degrees. I’m preparing myself for a tough race on Saturday that we’ll mostly be driving in the dark. I hope that after a hard battle we’ll be on the top spot of the podium.”

Allan McNish (Audi R18 e-tron quattro #2): “An advantage of seven hundredths of a second, compared with Silverstone were where we were trailing by just one hundredth, feels like a one-kilometer gap. I’m very happy with the result. A big ‘well done’ to the whole team. They prepared our car here in Bahrain completely from scratch – which is a very large task. That’s why the pole position is a way of saying ‘thank you’ for the great work.”

Marcel Fässler (Audi R18 e-tron quattro #1): “A nice result after all, considering that I caused the red flag myself. I was already on my first fast lap. If you then have to drive through the pit lane once more the top performance of the tires is gone. Afterwards, on my first flying lap, I wasn’t running so well anymore and said to myself, ‘Stay cool, don’t make any mistakes.’ That way, I managed setting a time of of 1m 45.888s. But Allan was a little faster. After what happened, second place isn’t bad. We’ve got good prerequisites for tomorrow.”

André Lotterer (Audi R18 e-tron quattro #1): “Unfortunately, Marcel made the situation a little difficult for himself. But after the interruption, he was running fast again. But it wasn’t quite enough for the pole position anymore. Without the red flag it would have been possible. But the tires work only on the first two laps. The top performance of the tires was lost because he had to come into the pit lane after the session was stopped. Still, Marcel showed a brilliant performance and barely missed pole. The point in the championship would have been important but the race tomorrow is more crucial. In any event, it’ll be very, very hot.”

Benoît Tréluyer (Audi R18 e-tron quattro #1): “The interruption by the red flag was a shame of course but we did cause it ourselves. Marcel (Fässler) made up for this small mistake with a strong time. The front row is simply good and there wasn’t much lacking in setting the best time. That shows our potential. I’m optimistic for the race.”