Generational change: Start of production of the new Audi A3 Sportback in Ingolstadt 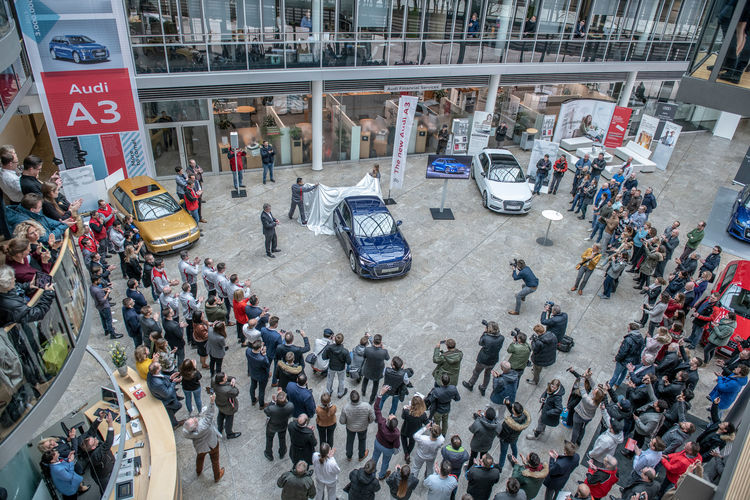 Achim Heinfling (left, next to the car), Plant Manager at the Audi Ingolstadt location, presented the new Audi A3 in the Audi Forum: Two Audi employees who work on the assembly of the A3 unveiled the eagerly awaited new model at the Audi Forum.
Download PDF (155 KB)
Facebook
Twitter
LinkedIn
WhatsApp

The Audi A3 is a successful model: Today, Plant Manager Achim Heinfling unveiled the new, eagerly awaited fourth A3 generation in front of employees in the Audi Forum in Ingolstadt on the occasion of the world premiere of the new premium compact. Since its market launch in 1996, Audi has delivered more than five million models of the A3 family worldwide. The success story will now continue. The new A3 Sportback** impresses with its dynamic design, new light signature, and digital operating concept. Electrified drives ensure high efficiency, supported by innovative assist systems.

Since the first generation, the Audi A3 has had innovations and quality characteristics of the full‑size class on board. After it was presented at the Paris Motor Show in 1996, it immediately opened up its own market segment and is thus considered to be the founder of the premium compact class. The Audi employees in Ingolstadt have built almost 3.8 million Audi A3 models at the headquarters of the four rings since the start of production. The Audi A3 was also produced at the Audi location in Brussels from 2007 to 2009. The joint production of the Audi A3 Sedan** currently still runs between Ingolstadt and Győr. The Audi A3 Cabriolet** is also built by Audi Hungaria. The Audi A3 Sportback and A3 Sedan additionally roll off the production line at the Chinese Foshan plant; the A3 Sedan is also produced in Aurangabad/India and São José dos Pinhais/Brazil.

The new Audi A3 remains an Ingolstadt exclusive. “The A3 is a success story for our location – we are proud to be able to continue this story in 2020 with the new generation,” says Achim Heinfling, Plant Manager at Audi Ingolstadt. “We are well prepared at the location. For the production of the body, we have built a completely new body shop in the northern complex especially for this model. All other production areas have been comprehensively adapted for the new Audi A3. The production technologies were increasingly digitalized in the process.”

The new model from Ingolstadt is sporty and dynamic with strong powertrains. Customers can order progressive steering and an adaptive suspension as optional extras. Electrified drives ensure high efficiency, supported by innovative assist systems. From its cockpit to its light signature and infotainment, the new Audi A3 Sportback** is digitalized. Additionally, Audi is offering seat upholstery made from recycled material for the new A3 for the first time.

With its start of production in Ingolstadt, the Audi A3 remains a companion for many Audi employees: For example, Reinhold Konegen experienced how the trade fair newcomer in Paris in 1996 became a customer favorite. He attached wheels, routed cables, mounted air filters, and was responsible for adjusting the suspension and track for 17 years. For the last eight years, he has been testing each unit at counting point 8 as the final “finisher.” He explains: “The Audi A3 is a part of my life.”

An overview of the milestones of the A3 model series:


Consumption values of the models listed
(Information on the fuel/electric power consumption and CO2 emission figures given in ranges depend on the selected equipment of the vehicle and on the tire/wheel sets used.)