Skip to content
We are using cookies for a better user experience.
11/16/20
Neuburg a. d. Donau
Sport

Further titles in Asia and Europe for the Audi R8 LMS 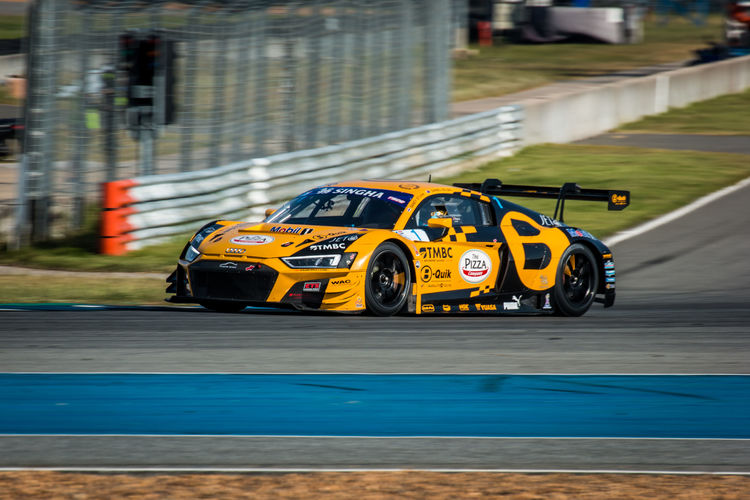 In the extremely compact season of the Thailand Super Series, Sandy Stuvik celebrated his second title win after 2019 in the Audi R8 LMS. In Europe, after two sprint titles in the GT World Challenge Europe, Belgian Audi Club Team WRT is now also the best team in the overall classification, which includes sprint and endurance.

Another title success in Thailand: Team B-Quik Absolute Racing won the title in an exciting final round of the Thailand Super Series 2020 with the Audi R8 LMS. On the Buriram circuit, Daniel Bilski started the first of two races from pole position. After a duel with teammate Philip Massoud, the Australian dropped back to fifth place. Massoud, who had been leading for a short time, also lost time and found himself in fourth place. After the driver change at the pit stop, Bilski’s teammate Sandy Stuvik started a race to catch up. After one hour of racing, the driver duo crossed the finish line in third place. In the second race, Stuvik pulled away from the field after starting from pole position. His Australian fellow driver Bilski continued the inspiring drive of the Audi R8 LMS with the number 1 after the driver change and crossed the finish line in first place with a 1.6 second lead. As in the previous year, Sandy Stuvik from Thailand thus won the drivers title in the Thailand Super Series. For Daniel Bilski it was the first title win in this racing series. Together with fourth place from Henk Kiks/Philip Massoud, Team B-Quik Absolute Racing collected enough points to secure the team classification for the second time in a row.

Team title in the GT World Challenge Europe: After the Belgian Audi Club Team WRT with Audi Sport driver Dries Vanthoor and privateer Charles Weerts had already won the GT World Challenge Europe sprint classification in the driver and team categories, Vincent Vosse’s team also prevailed in the overall classification at the finale. After the frenzy start of the race at Le Castellet, an opponent turned around the Audi R8 LMS of Audi Sport driver Christopher Mies, which had started from fourth place. The German continued in 19th place after a 360-degree spin. Over the course of 1,000 race kilometers, he improved to fourth place with his Belgian teammates Dries Vanthoor and Charles Weerts. They were followed by their teammates Mirko Bortolotti/Rolf Ineichen/Kelvin van der Linde. Thus, for the third time after 2014 and 2015, Belgian Audi Club Team WRT was the best team in the overall standings of the leading European GT3 racing series. In this table all results from Sprint and Endurance are aggregated. In the corresponding driver category, Weerts/Vanthoor finished the season in second place. In addition, Saintéloc Racing, another Audi customer team, had already secured the Silver Cup titles for teams and drivers over the sprint distance. As a result, five titles in this racing series in the 2020 season went to Audi.

Runner-up title in America: Last year’s champions Tyler McQuarrie/Jeff Westphal finished the 2020 season in the IMSA Michelin Pilot Challenge in Sebring as runners-up in the GS class. In the Audi R8 LMS GT4 of the CarBahn with Peregrine racing team, the two Americans won two races this year and were on the podium three more times. Steve Dinan’s team also achieved the runner-up title in the team classification, in which 36 teams collected points. In the end, Audi was third best of eight car manufacturers in the manufacturers classification. The IMSA Michelin Pilot Challenge is one of the toughest national GT4 racing series in the world with more than 20 participants per race and a total of 96 classified drivers.

Podium at the finale: Gilles Magnus finished the season in the FIA WTCR with a podium result. The young Belgian driver made a perfect start in the first of three sprints at the Aragón circuit in Spain. In the Audi RS 3 LMS of the Comtoyou Racing team, Magnus improved by four positions from eighth on the grid as early as on the first lap. On lap six he overtook his teammate Nathanaël Berthon, ahead of whom he finished the race in third place. Gilles Magnus finished his debut season in the world’s most prestigious TCR competition in second place in the Trophy class for privateers, followed by his teammates Nathanaël Berthon and Tom Coronel. He finished fifth in the overall standings after securing the rookie title early two weeks ago. The Audi RS 3 LMS has claimed a total of seven podium places in the 2020 FIA WTCR season, including two overall victories.

Championship lead extended: Takuro Shinohara has further increased his lead in Saturday’s standings of the TCR Japan racing series with the Audi RS 3 LMS. The 25-year-old Japanese remained unbeaten on the Autopolis circuit for the fourth time in a row in as many events in the first of two sprints of each weekend. In qualifying he had secured pole position with a 1.1-second lead, in the race he built up an eleven-second lead in twelve laps. As a result, he increased his championship lead in the race series Saturday standings by 13 to 37 points. Audi Team Hitotsyuama leads the team classification after four of six events with an advantage of 22 points.

Runner-up title in the 24H Series: Audi customer team AC Motorsport finished the season as runner-up in the 24H Series, which is popular with amateur drivers. The team from Belgium entered an Audi RS 3 LMS for different driver combinations during the season and won the season opener in Dubai in January. At the finale in Mugello, the team reached fourth place in the TCR class with Stéphane Perrin/Mathieu Detry/James Kaye. This resulted in second place in the continental classification of the TCR teams and third place in the European classification of the series.

Podium in Sebring: Team FastMD Racing with Speed Syndicate celebrated a podium result with the Audi RS 3 LMS at the final round of the IMSA Michelin Pilot Challenge. Max Faulkner/James Vance took third place after two hours of racing. This put them in fifth place in the championship final standings behind Gavin Ernstone/Jon Morley, who also raced an Audi RS 3 LMS. In the manufacturers classification Audi reached second place after ten races.

Third place in Spain: At the fourth round of the Campeonato de España Resistencia, the French Team Motorsport Développement achieved a podium finish. After two hours of racing in Barcelona, Jean-Laurent Navarro and Pierre-Arnaud Navarro steered their Audi RS 3 LMS to third place in the field of the nine participants in the TCR class.