Skip to content
We are using cookies for a better user experience.
07/19/18
Neuburg a. d. Donau
Sport 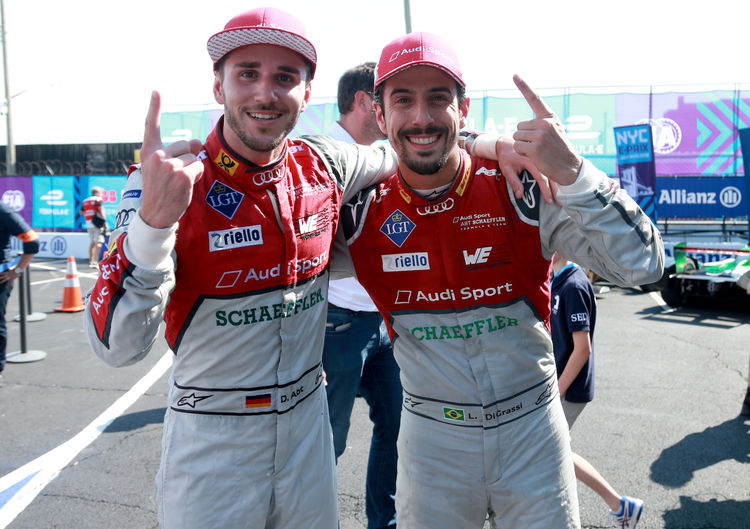 Seemingly trailing behind after the first third of the season and now the new champion following a gripping season finale: with focused work, team spirit and unbroken motivation, Audi Sport ABT Schaeffler managed an impressive fightback in the ABB FIA Formula E Championship. The journey to the first teams’ title with a total of 264 points was marked by many emotional highs and lows.

Daniel Abt and Lucas di Grassi start the season with a dramatic emotional roller coaster: In the opening race in Hong Kong, his first appearance in car number one, di Grassi scores no points following a collision. Abt is on course for a podium result until a problem, while starting the second car, costs him 20 seconds. The points for fifth place are a cold consolation. Afterwards, everything seems to be back on track: Daniel Abt, on his 25th birthday, scores a commanding victory of which he is stripped again that night due to an administrative mistake of his team – an error that gave no performance advantage. Lucas di Grassi stops due to a faulty alarm in the battery management system of his car.
Head of Audi Motorsport Dieter Gass: “We had strong race pace on both days. But it goes without saying that we had a somewhat different idea of the season opener.”
Techeetah: 33 points/Audi Sport ABT Schaeffler: 11 points

The team takes home a single point from Formula E’s visit to Marrakesh. Daniel Abt and Lucas di Grassi, on setting the best times in all of the free practice sessions, once again prove the speed of the Audi e-tron FE04, but lack fortune in the race: Abt drops to tenth following a drive-through penalty and his teammate is lying in fourth position behind the subsequent winner, when he has to park his car due to a technical issue.
Lucas di Grassi: “Our car is fast but it’s obviously frustrating to have reliability issues in two consecutive races.”
Techeetah: 43 points/Audi Sport ABT Schaeffler: 12 points

The premiere of the electric racing series in Santiago de Chile marks the season’s low point. It is the only time in the 2017/2018 season that the team returns from a Formula E event without a single point. Lucas di Grassi’s string of technical issues continues: The reigning Champion is forced to retire shortly after the car change. Daniel Abt’s Audi e-tron FE04 is hit by a rival and parked before the race is over.
Team Principal Allan McNish: “I’ve been in racing for many years: Sometimes it goes with you and sometimes everything goes against you – the latter is certainly the case with us at the moment.”
Techeetah: 89 points/Audi Sport ABT Schaeffler: 12 points

Round five in Mexico City marks the season’s turning point for Audi Sport ABT Schaeffler. Daniel Abt’s first victory in Formula E also marks the first success of a German driver and the first one for Audi as a factory team. His teammate, Lucas di Grassi, at an altitude of more than 2,000 meters is faced with a grueling job: The Brazilian starts from the back of the grid because his inverter had to be opened after the race in Santiago. In spite of these difficult conditions, he shows a spirited fightback and with ninth position scores his first points of this season.
Dieter Gass: “After the problems we had in the first races, this race tastes particularly sweet. But the race was great from both drivers. Lucas drove fantastically and I’m absolutely delighted for Daniel.”
Techeetah: 99 points/Audi Sport ABT Schaeffler: 40 points

In Uruguay, Champion Lucas di Grassi returns to the podium on which he will be standing from now on in each of the seven remaining races – a new Formula E record. Along the beach at Punta del Este, the title defender fights a gripping duel with Jean-Éric Vergne during the entire race distance and celebrates second place. Daniel Abt is also clearly on course for a podium when his seat belt suddenly comes undone. After an additional pit stop, 14th place is all he is able to achieve.
Lucas di Grassi: “Our car is super fast. I look forward to the second half of the season.”
Techeetah: 127 points/Audi Sport ABT Schaeffler: 58 points

Formula E arrives in Europe: Its first appearance in Rome is dominated by Lucas di Grassi and Daniel Abt who, following a less than perfect qualifying, shine with fightbacks: Di Grassi finishes second from sixth on the grid and Abt starts from ninth and goes on to finish fourth. On clinching these two top-five spots, Audi Sport ABT Schaeffler has advanced to fourth position in the teams’ classification.
Dieter Gass: “A fantastic start to the European season!”
Techeetah: 152 points/Audi Sport ABT Schaeffler: 89 points

Second for the third time: Lucas di Grassi continues his string of success in Paris. His teammate, Daniel Abt, keeps himself busy on the track around the Dôme des Invalides: The German overtakes seven cars and scores valuable points with seventh position. As successful and even spectacular as the fightbacks of the Audi drivers are, qualifying remains a weakness.
Daniel Abt: “I hope the fans enjoyed the show. Next time, we need to do better in qualifying and then there’ll be a trophy again, too.”
Techeetah: 188 points/Audi Sport ABT Schaeffler: 114 points

Home round! The former Tempelhof airport in Berlin is the venue of the German race which, embedded in the DFB Pokal final, achieves top viewing figures. About 1.5 million viewers witness the most successful race day of a team in Formula E’s near-four-year history: Daniel Abt clinches pole position, wins in front of Lucas di Grassi, sets the fastest race lap in the process and also leads over the whole race distance. 47 of 47 possible points – no other team has achieved this before.
Allan McNish: “A clean sweep on home soil, a day just can’t be better than this. I’m incredibly proud of the entire team!”
Techeetah: 205 points/Audi Sport ABT Schaeffler: 161 points

Before the series’ debut in Zurich, it’s clear that if the team wants to have a realistic chance of winning the championship it will have to score a lot of points in Switzerland. No sooner said than done: Lucas di Grassi, in the first international car race in Switzerland since 1954, in front of a record turnout of far more than 100,000 spectators, clinches his first victory of this season. Daniel Abt is less fortunate: Rival Nelson Piquet rear-ends him right after the start. Due to the necessary change of the rear wing, Abt finishes out of the points. In Zurich, Audi Sport ABT Schaeffler reduces the gap by 11 points down to 33 before traveling to New York City for the final races.
Allan McNish: “I’m especially happy for Lucas’ crew that had a difficult start to the season and how they have come back fully. And of course, after the home round in Berlin, it’s also fantastic for Audi to have won the first circuit race in Switzerland in 64 years.”
Techeetah: 219 points/Audi Sport ABT Schaeffler: 186 points

Showdown in front of Manhattan’s skyline: 33 points have to be made up by Audi Sport ABT Schaeffler in the last two races in New York City. Doable – that’s the general opinion in the paddock. Optimism within the team is huge. “We worked hard both on the race track and back home in Neuburg – even though it will be difficult, we now go to New York with a clear attitude and focus on the championship,” says Allan McNish. With a one-two – Lucas di Grassi wins ahead of Daniel Abt, who also posts the fastest race lap – the team reduces the gap to five points. The race on Sunday, which Jean-Éric Vergne wins, becomes a real thriller: All four drivers of the competing teams, Techeetah and Audi Sport ABT Schaeffler, start the race within the top five. The title race remains open up until the last second. Then it’s clear: the second and third places clinched by di Grassi and Abt suffice to bring the teams’ championship, with a two-point advantage, home to Germany for the first time.
Allan McNish: “Now it’s reality: teams’ champions! This season was up and down, and everyone always did their best. Also today, when push came to shove, our drivers delivered the goods. A big thank you also goes to our base camp in Germany! Great teamwork! Great job!”
Audi Sport ABT Schaeffler: 264 points/Techeetah: 262 points