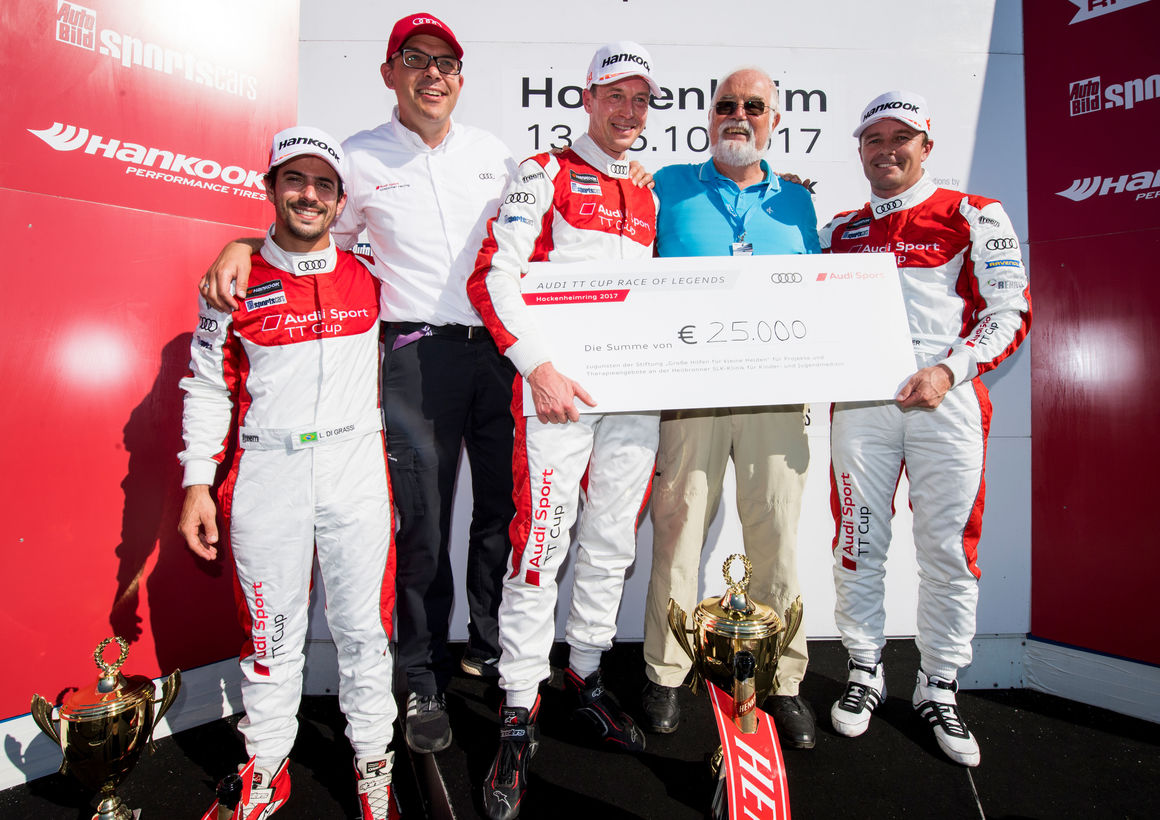 One victor but many winners: there was not a single loser in the one-off Audi TT cup Race of Legends at Hockenheim. At the end of the three-year period of the Audi one-make cup, many of the brand’s motorsport legends were invited to a guest race. A donation total of 25,000 euros was collected to go towards a good cause.

Good fun all round: thousands of fans were given autographs from their idols, the 16 racing drivers lined up in identical race cars in a combination never seen before, and at the end the “Big Aid for Little Heroes” benefited from some great generosity. The charity is currently funding 19 projects and therapy treatments at the SLK Clinic for pediatric and youth medicine in Heilbronn. For Christian Abt, Filipe Albuquerque, Frank Biela, Dindo Capello, Marcel Fässler, Rahel Frey, Jean-Marc Gounon, Lucas di Grassi, Vanina Ickx, Tom Kristensen, Lucas Luhr, Stéphane Ortelli, Emanuele Pirro, Frank Stippler, Hans-Joachim Stuck and Marco Werner, it was a pleasure to compete against each other in the Audi TT cup race car and to contribute personally to the donation sum. Audi Sport customer racing contributed with its own donation to the money raised, bringing the total amount to 25,000 euros.

In preparation for the qualifying and the race, the 16 race legends received support from the regular participants in the Audi Sport TT Cup, which Philip Ellis won the day before. Each junior accompanied a legend and gave practical tips on the 340 hp race car. In qualifying, the two Germans Frank Stippler and Frank Biela took the best attacking positions on the grid and shared the front row. Stippler broke away after the start, whilst Filipe Albuquerque, Tom Kristensen and Frank Biela directly behind him all retired after an incident in the first corner. Lucas di Grassi, starting from tenth on the grid, fought his way forward in a spectacular race to finish as the runner-up. The current Formula E champion kept within touching distance of victory until the very last lap, even going side-by-side with Stippler, but ultimately had to accept defeat by just 0.8 seconds. Marcel Fässler, who dueled with the Brazilian for many laps, completed the podium in third. The fastest woman in the field was Vanina Ickx, who drove to seventh place from 16th on the grid, overtaking the former DTM champion Hans-Joachim Stuck on the way.

“That was a worthy farewell to our one-make cup,” said Chris Reinke, Head of Audi Sport customer racing. “On a dream weekend for Audi in the DTM and in the Audi Sport TT Cup, we have said goodbye to the one-make cup in style and have combined the Race of Legends with a good cause. I would like to sincerely thank our fans and the legends for the breathtaking atmosphere this weekend.”