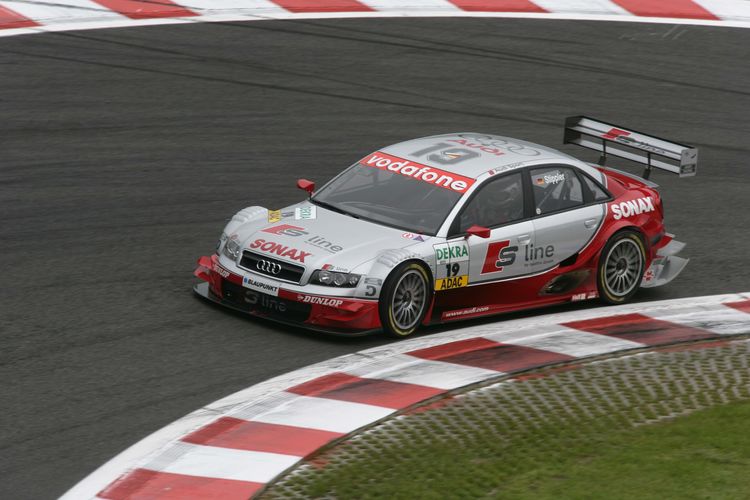 Changing weather conditions obstructing the two 90-minute test sessions during the DTM’s first “away-from-home” race at Spa-Francorchamps (Belgium) meant that the lap times achieved were not really conclusive. Frank Stippler was the only Audi driver to complete a lap with new tyres in the second test in the afternoon before rain set in. The DTM newcomer – finishing sixth – was not only the quickest driver of the Audi squad but the best in a car from last year as well.

With positions three, four and five in the first morning test, Tom Kristensen, Mattias Ekström and Martin Tomczyk proved that the demanding circuit in the Ardennes also suits the new Audi A4 well. In the afternoon, it started to rain before the Audi drivers were able to start their chase for lap times with fresh tyres.

Friday, the 13th of May, started with a blaze for Christian Abt: The rear of his Audi A4 DTM went up in flames when parts of the tyre were rubbing against the body. The fire as well as the extinguishing powder used by the marshals required the A4 DTM to be completely dismantled, cleaned thoroughly and prepared from scratch again. Abt was relegated to the part of a spectator on Friday afternoon but will rejoin the action at Spa on Saturday.

The first DTM performance at Spa-Francorchamps is considered one of the highlights of the 2005 racing season. Tickets are selling for as little as 20 euros. ARD will broadcast the Qualifying (Saturday, 14 May, starting at 2 p.m.) and the race (Sunday, 15 May starting at 1:45 p.m.) live from Belgium.

Frank Stippler (Audi Sport Team Joest #19)
19th / 6th, 2m 14.145s
“This morning I still had to try and get my bearings. Since the fastest times were clocked right at the beginning, the result itself didn’t look all that good. My fast lap in the second test was pretty good but not perfect. Afterwards, it was a bit difficult because the track was too dry for wets and too wet for slicks.”

Tom Kristensen (Audi Sport Team Abt #5)
3rd / 11th, 2m 14.343s
“Spa is a real challenge. To drive the new Audi A4 DTM on this track for the first time today was very interesting. In the morning, we tried out different set-ups with all four new cars to get some learning experience for the afternoon. Unfortunately, rain set in. But at least this has given us a few laps on a wet track. This was important, too, because the weather might just stay like this for the rest of the weekend. Now, our engineers have data for both dry and wet conditions.”

Mattias Ekström (Audi Sport Team Abt Sportsline #1)
4th / 5th, 2m 14.360s
“Weather conditions here are very difficult. We did not complete as many laps today as we had planned. But I think that our work was quite successful. I’m eager to see where we’ll actually stand because today’s lap times are not really conclusive.”

Martin Tomczyk (Audi Sport Team Abt Sportsline #2)
5th / 16th, 2m 14.438s
“The first test was pretty good. The times were okay, we’re on the right track. In the afternoon our ability to do set-up work was very limited, because the weather kept changing. Tomorrow we’ll only have one more hour, and we’ll definitely need it. I’m confident, though, that we’ll have a very good car in the qualifying. “

Pierre Kaffer (Audi Sport Team Joest Racing #15)
15th / 13th, 2m 15.844s
“Today, we didn’t get to do any real driving all day. Generally speaking, I’ve got a good feeling, but in the second test in the afternoon we had a bit of bad luck. Like many others, I was out on the track with new tyres at the wrong time. Tomorrow, I want to move up more towards the front of the field.”

Allan McNish (Audi Sport Team Abt #6)
16th / 17th, 2m 16.036s
“I had problems with the power steering, that’s why I didn’t get to drive much in either of the two sessions. Because of the weather, the loss in the second test was not that great after all. The car feels quite good. Still, it’s a disadvantage to have done only such a small number of laps.”

Christian Abt (Audi Sport Team Joest Racing #14)
17th / no time, 2m 16.307s
“Well, I suppose today was Friday the 13th. The right rear tyre was rubbing against the car’s body, and that caused the rear to catch fire. Now, I’ve lost the entire day. Normally, you can’t make that up in the DTM, but I’m going to try it anyway.”

Rinaldo Capello (Audi Sport Team Joest #18)
20th / 19th, 2m 16.878s
“This morning, engine oil was splashing onto the rear wheels. In the afternoon we fitted a new front splitter, which made the car very unstable in Eau Rouge. We tried to solve this problem. We don’t know yet if we managed to do this, because it began to rain. Tomorrow, we’ll see where we stand.”

Ralf Jüttner (Technical Director Audi Sport Team Joest): “Frank has shown that we’re able to keep up with the pace here with our cars from last year as well. Pierre and ‘Dindo’ Capello had a bit of bad luck in the afternoon: while they were out on the track, it started raining. Due to the fire, Christian hardly had the chance to get any driving in. His car was damaged heavily, but we’ll be able to fix that by tomorrow.”

Hans-Jürgen Abt (Team Director Audi Sport Team Abt Sportsline): “Of course, the result isn’t what we’d have liked it to be. But we weren’t able to predict these weather conditions either. Only at the very beginning of the first test did we use new tyres, and under these circumstances, we’re quite satisfied.”

Dr Wolfgang Ullrich (Head of Audi Motorsport): “We tried to adjust to this circuit, which certainly wasn’t all that easy due to the different weather conditions. But we have to anticipate the weather continuing to change throughout the whole weekend. That’s also the reason why we tried to develop a feeling for the new car. I think we’ve managed to do this pretty well.”