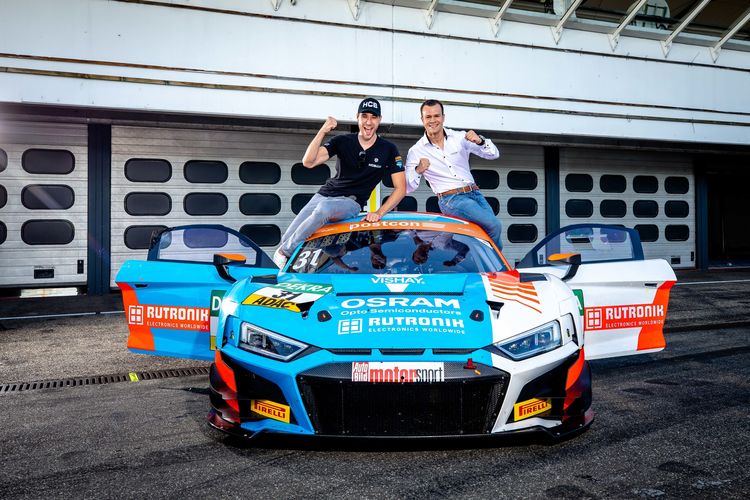 Title decision in the ADAC GT Masters: Kelvin van der Linde/Patric Niederhauser in an Audi R8 LMS from HCB-Rutronik Racing, on scoring a victory at Hockenheim on the race weekend before the finale, managed to win the drivers’ classification early. Worldwide, the weekend saw teams from Audi Sport customer racing celebrating victories and podium finishes with the Audi R8 LMS, the Audi R8 LMS GT4 and the Audi RS 3 LMS.

Fourth title success in Germany: For the fourth time since 2009, Audi Sport customer racing has won one of the world’s highest-caliber GT3 series, the ADAC GT Masters. Kelvin van der Linde/Patric Niederhauser, on clinching their second victory this season in round six at Hockenheim, celebrated their title win early. South African Audi Sport driver van der Linde and Swiss privateer Niederhauser, who have been sharing an Audi R8 LMS from HCB-Rutronik Racing this season, entered the decisive race on Sunday from pole position and crossed the finish line in the top spot, too. In the team’s maiden season in the ADAC GT Masters, Niederhauser clinched his first championship success, while van der Linde won the ADAC GT Masters for the second time. In 2014, he had decided the racing series in his favor for the first time together with René Rast. Twice before, Audi drivers had secured this title – in 2009, it was Christian Abt, in 2016, Christopher Mies/Connor De Phillippi. Consequently, worldwide, an overall drivers’ classification went to drivers of an Audi R8 LMS for the 64th time since the beginning of the customer racing program. On the ADAC GT Masters weekend at the Hockenheimring, Audi teams achieved additional podium finishes:Dennis Marschall/Carrie Schreiner (HCB-Rutronik Racing) finished the first race in third place while Ricardo Feller/Dries Vanthoor (Montaplast by Land-Motorsport) finished the second race runners-up.

Victory in the Super Taikyu Series: Audi’s customer team X Works Racing based in Hong Kong achieved its first victory in the Super Taikyu Series in the five-hour race at Motegi, Japan,. Philip Tang, Smart Tse and Shaun Thong in an Audi R8 LMS had entered the race from the front row of the grid. After dropping to fourth position following a spin and a drive-through penalty, the trio showed a strong fightback in the turbulent race. In the final stage, they captured the lead and kept it up until the finish.

Double victory at Zhuhai: In the finale of the Circuit Hero Series season – held as part of the Pan Delta Racing Festival at Zhuhai, China – David Chen in an Audi R8 LMS from Audi Sport China’s TSRT team celebrated two victories after having moved up into the top category for the last race weekend. The Audi driver from China had entered the first race from pole position and in the second race, claimed victory after starting from eighth position on the grid. Another highlight for Chen: due his results on the previous race weekends, he also became GTC Champion. Ma Ka Chun in an Audi R8 LMS from Team Zun Motorsport Crew as the runner-up in the first race at Zhuhai caused an Audi one-two result and crowned himself champion in the Supercar Challenge class. In the second race, Lin Yiming in third position achieved a podium finish as well.

Premiere in Spain: The Audi R8 LMS GT2 is about to contest its first race. The most recent sports car from Audi Sport customer racing will make its debut at Barcelona from September 27 to 29 in the Blancpain GT Sports Club – a racing series specifically designed for Gentlemen drivers. The Belgian Audi Sport Team WRT, which has won numerous sprint events, major endurance races and championship titles with Audi since 2010, is the fielding team for the 640-horsepower GT2 sports car in Spain. James Sofronas will contest the two 45-minute races of the Blancpain GT Sports Club in an Audi R8 LMS. The American looks back on a racing career spanning more than two decades, has successfully fielded the GT3 version of the Audi R8 LMS for many years in North America, and last year personally won three titles in an Audi R8 LMS GT4.

Advantage extended: Tyler McQuarrie/Jeff Westphal in the title decision stage before the finale of the IMSA Michelin Pilot Challenge extended their points-score once more. In an Audi R8 LMS GT4 from Team Carbahn with Peregrine Racing, they had to admit defeat by only 2.7 seconds after two hours of racing in the ninth of ten rounds of the season at Laguna Seca. However, the American driver pairing only needed the runner-up’s spot in the 22-strong field of the GS class to extend its advantage in the standings from 24 to 34 points. The decision will be produced at Road Atlanta on the weekend of October 11 to 13.

Class victory in the United Kingdom: In the finale of the British GT Championship season at Donington, Audi Sport’s customer team Steller Performance was victorious in the GT4 class. Richard Williams and Sennan Fielding crossed the finish line after two hours of racing with an advantage of 1.543 seconds.

Lead of the standings defended: In round five of the GT4 France at Magny-Cours, Fabien Michal and Grégory Guilvert in an Audi R8 LMS GT4 from Saintéloc Racing finished overall runners-up in the first race. In spite of a retirement in the second race, the two Frenchmen will travel to the season’s finale at Le Castellet (October 12/13) as leaders of the standings with an 18-point advantage.

Podium finish in Germany: Audi Sport’s customer team Racing One clinched two podium finishes in the penultimate round of the ADAC GT4 Germany. In the second race, Nico Rindlisbacher and Patricija Stalidzane in an Audi R8 LMS GT4 finished runners-up ahead of their teammates Markus Lungstrass and Mike Beckhusen.

Frey achieves double victory: The Swiss Rahel Frey in an Audi R8 LMS GT4 celebrated a double victory in the Audi Sport Seyffarth R8 LMS Cup at the Nürburgring. In the first race, Rudolf Rhyn and Tim Reiter completed the podium and in the second round, Tim Reiter finished runner-up ahead of Robin Rogalski who will travel to the season’s finale at the Hockenheimring on the first weekend in October.

First victory this season for Roadshagger Racing: Gavin Ernstone and Jon Morley in an Audi RS 3 LMS scored their first victory in the IMSA Michelin Pilot Challenge. The driver pairing won the TCR classification in round nine at Laguna Seca with a masterful tactical feat. After starting from the twelfth spot on the grid, the duo, following a driver change during the two-hour race, did not have to pit again during the last 50 minutes of the race and, as a result, achieved an advantage over the other teams. Three weeks earlier, victory had been within the driver pairing’s reach in Virginia when, while leading the race, it was forced to retire due to an accident involving several entrants. Before the finale, Ernstone/Morley have moved up to third position in the drivers’ standings and are separated from the leaders of the standings by 14 points.

Important step toward the title: Huang Chu Han on the fourth weekend of the TCR China took a big leap forward. The Chinese in an Audi RS 3 LMS of the NewFaster Racing team finished runner-up in the second sprint race at Ningbo from the fourth spot on the grid. At the same time, several important rivals retired after accidents. As a result, Huang Chu Han extended his advantage before the finale to 20 points.

Souza wins title: In the season’s finale of the Circuit Hero One series for touring cars at the Pan Delta Racing Festival at Zhuhai (China), Filipe Souza in an Audi RS 3 LMS from Champ X T. A Motorsport celebrated a victory in the TCR class, crowing himself Circuit Hero One TCR Champion after three races.

Podium finishes in Italy: Audi Sport customer teams achieved podium finishes in round six of the TCR Italy season at Vallelunga. In race one, Jacopo Guidetti in an Audi RS 3 LMS from GF Motorsport clinched third place ahead of his fellow Audi driver Enrico Bettera. In the second race, Bettera secured the last spot on the podium ahead of Guidetti.