Skip to content
We are using cookies for a better user experience.
10/28/18
Suzuka/Neuburg a. d. Donau
Sports

Fourth place for Audi in Suzuka 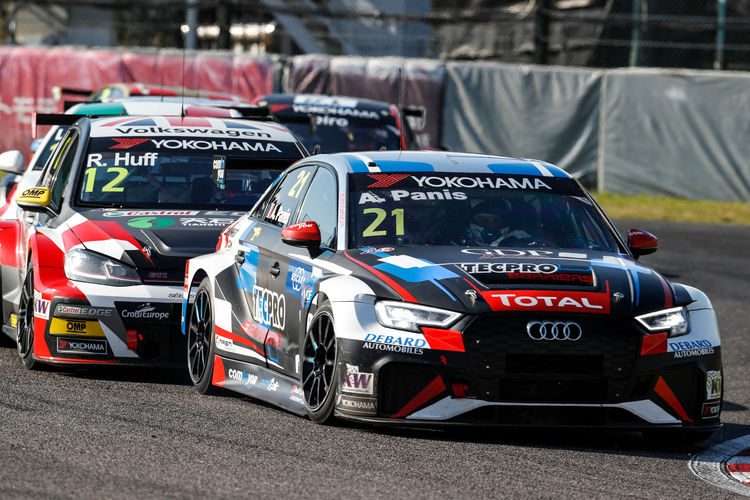 After the 1-2-3 victory for Audi Sport customer racing recently in Wuhan, the teams faced a difficult task at the ninth race weekend of the WTCR – FIA World Touring Car Cup in Japan: The Audi RS 3 LMS had to compete loaded with the maximum compensation weight of 60 kilograms. Nevertheless, three drivers finished in the points. Privateer Aurélien Panis even delivered his best performance of the season to claim fourth place.

The three Audi Sport drivers Gordon Shedden, Jean-Karl Vernay and Frédéric Vervisch as well as privateers Nathanaël Berthon, Denis Dupont and Aurélien Panis all agreed: While the Grand Prix circuit of Suzuka is a beautiful and demanding racetrack with avid fans who enthusiastically welcome the teams, the tasks they faced this time were incredible difficult. The Audi Sport Leopard Lukoil Team earned ten points for sixth place in race one, with the Audi Sport Team Comtoyou finishing on ninth, giving Frédéric Vervisch four points. In the second race, two private drivers achieved the best results out of the fleet of six Audi RS 3 LMS racers. Initially, Denis Dupont from Audi Sport Team Comtoyou defended his fourth position, but with three laps to the flag the Belgian fell back to seventh place and later received a penalty. Aurélien Panis grabbed his chance: In qualifying, the Frenchman from Comtoyou Racing had matched his previous personal best of the season from Portugal as the best Audi driver in sixth position on the grid. In the second race, for which the grid was reversed, he started from fifth and advanced to fourth place. He tackled race three from position six on the grid, put in a spirited drive and improved his position to fifth place. One day before his 24th birthday, Panis achieved his best result so far this season. Taking up the spectacular third race from the 14th grid spot, Frédéric Vervisch battled his way up the order to finish on seventh. Jean-Karl Vernay ploughed from 17th on the grid to take the flag in tenth place.

Ranking fifth in the drivers’ classification of the series, Vernay remains the best driver of an Audi RS 3 LMS. “The conditions were very tricky with the heavy weights for our drivers,” said Chris Reinke, Head of Audi Sport customer racing. “That makes it all the more remarkable that three drivers managed to bring home a total of 47 points over the course of the weekend, and Aurélien Panis even achieved his personal best. Now we’ll do our utmost to conclude the season in three weeks with a good result.”

The debut season of the WTCR – FIA World Touring Car Cup concludes with a real classic from November 15 to 18: The Macau city circuit with its combination of high-speed passages and tight corners has traditionally guaranteed plenty of slipstream duels and gripping racing.