Fourth place and class victory for Audi Sport at Bathurst 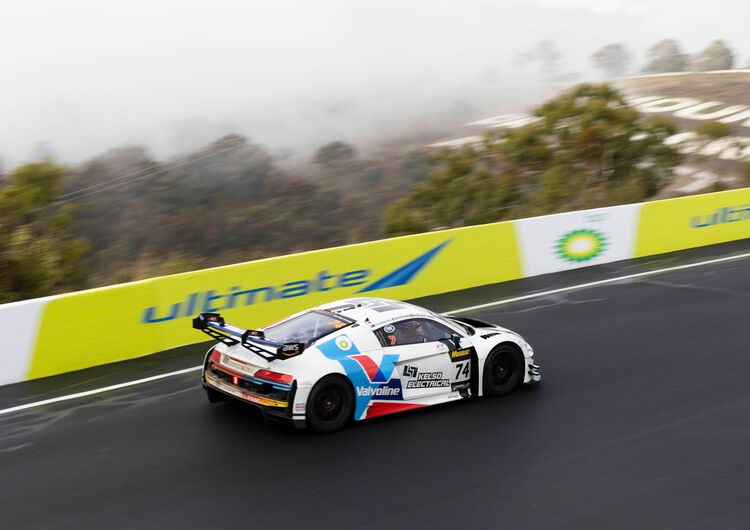 Audi Sport customer racing set the pace at the Bathurst 12 Hour with its local teams in all free practice sessions, qualifying and the top-10 shootout. The race started with a remarkable double lead for the Audi R8 LMS. However, a puncture and a two-minute time penalty deprived the team of any chance of a podium result. For Team Supabarn, on the other hand, a dream came true. The team had to fear for its entry after a serious practice accident, but in the end it managed a commanding class victory in the amateur classification.

Chaz Mostert and Audi Sport driver Kelvin van der Linde grabbed the first headlines of the 12-hour race. With an advantage of 0.0858 seconds, the Australian Mostert from Team Coinspot had secured the pole position ahead of the South African van der Linde from Audi Sport Team Valvoline. It was the fourth pole position for Audi, which was a new record at this event. Mostert, last year’s Australian TCR Champion with Audi, thus won the Allan Simonsen Pole Award for the second time. At the beginning of the race, the two Audi R8 LMS cars numbered 65 and 74 also set the pace at the front. Incipient rain caused early pit stops and difficult conditions from the second hour of the race onwards, in which the private Audi #17 of Team BRM with Joey Mawson/Nick Percat/Mark Rosser initially took the lead. Finally, the team finished in eighth position.

Coinspot’s number 65 was not spared setbacks either: Chaz Mostert/Fraser Ross/Liam Talbot lost ten laps after a repair of the gearshifting actuator. The team decided to withdraw the car shortly before the end of the eighth hour of racing after Ross touched a wall. Kelvin van der Linde, who managed the fastest race lap, subsequently led the competition. However, the team incurred a two-minute time penalty because teammate Brad Schumacher had exceeded his maximum permitted driving time. As a result, van der Linde, Schumacher and Audi Sport driver Nathanaël Berthon were no longer on the same race lap as the leader and only finished fourth. The sister car of Ricardo Feller/Yasser Shahin/Markus Winkelhock with car number 777, which had been in the lead after four hours of racing, received two penalties in the course of the race and lost additional time due to a puncture. In the end, the driver trio was left with only seventh place overall. The second-best Audi team at the finish was the Hallmarc squad. Long-time Audi customer Marc Cini, together with his teammates Dean Fiore and Lee Holdsworth, managed the distance without making any mistakes with the number 9 car and crossed the finish line in sixth position.

The story of the weekend, however, was written by Team Supabarn. After private driver Theo Koundouris with the number 47 hit a concrete wall with force in free practice, the team had to manage a “race before the race”: The Melbourne Performance Centre brought a spare chassis to Bathurst overnight from the team’s base almost 800 kilometers away, which was updated to the current specification on site. Even though there was little time for set-up and Theo Koundouris was unable to start, his brother James and his teammates Dave Russell and Paul Stokell drove to Am class victory and finished ninth overall. A sixth Audi R8 LMS finished with the number 24 car. The car of Tony Bates/Dave Reynolds/Cam Waters drove to eleventh position.

“Congratulations to Team Supabarn and the Melbourne Performance Centre entry team on this well-deserved class win,” said Chris Reinke, Head of Audi Sport customer racing. “Our privateer drivers mastered a great effort in particularly difficult conditions. Hats off to this performance. At the end, there were five Audi cars in the top ten but we would have loved to fight for our fourth victory here. We had the pace for it.”

While the most important endurance race in the southern hemisphere is behind Audi Sport customer racing, the world’s biggest endurance race is on the calendar in two weeks already. In the competition for the brand’s sixth overall victory, seven Audi R8 LMS cars will contest the Nürburgring 24 Hours from May 26 to 29.