Skip to content
We are using cookies for a better user experience.
08/17/20
Neuburg a. d. Donau
Sports 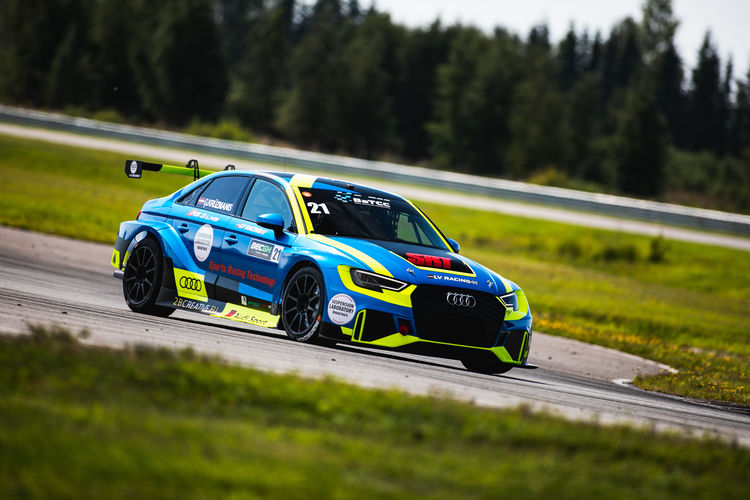 Two victories in Estonia: For the first time, the Audi RS 3 LMS competed at a race event in the Baltic States. Team LV Racing won three trophies in the endurance and sprint races of the Pärnu Summer Race on the Baltic Sea. On Saturday, the private team successfully mastered the 6-hour race. The Estonian Martin Rump, known as a race winner from the Audi Sport R8 LMS Cup and the GT World Challenge Asia, captured the pole position in the TCR class in the Audi RS 3 LMS. Until the middle of the race, the Audi team fought a battle with the Noker Racing Team, which then retired. After 250 laps, Martin Rump and his teammates Antti Rantala from Finland and Konstantīns Calko from Latvia won the TCR class by four laps. At the same time, the team finished fourth overall at the BEC6H opener, ahead of several GT sports cars. On Sunday, two sprints were on the agenda at Auto24Ring north of the port city of Pärnu. This time Ģirts Krūzmanis drove the Audi RS 3 LMS of Team LV Racing. The Latvian took second place in the TCR class in the first race and won the second race with a 15 second lead.

To be continued: Zachary Vanier continued his winning streak in Canada. The only 17-year-old junior driver, who had already won one race at the Canadian Touring Car Championship opener at the end of July, won both races in the TCR class on the second race weekend. At the Shannonville Motorsport Park halfway between Toronto and Montreal he steered the Audi RS 3 LMS to a commanding victory in the first race with a 32-second lead. He was trailed by Marco Cirone from Mark Motors Racing, Ron Tomlinson from TWOth Autosport and Damon Sharpe from Blanchet Motorsports, three other privateers relying on the Audi RS 3 LMS in a field of the eight TCR contenders. Team Pfaff Motorsports was unbeatable in the second 40-minute race as well. Vanier again won ahead of Cirone, this time with a 22-second lead. After two of three races of the Canadian Touring Car Championship, Vanier leads the TCR standings with 497 points, ahead of Cirone with 479 points. The final and thus the title decision will follow in two weeks’ time at the Calabogie circuit.

Second place in the Scandinavian season opener: Last year’s champion team Brink Motorsport achieved second place in the first round of TCR Scandinavia 2020. Tobias Brink had secured pole position in the Audi RS 3 LMS in second qualifying at the Gelleråsen circuit in the Audi RS 3 LMS and set a new track record in the process. In the first of three sprint races he finished second after 17 laps. Rob Huff, who was placed in front of him, was penalised for an unfair overtaking manoeuvre in the fight with Brink and dropped back to fourth place. Brink then led the second race, but was given a 20-second penalty due to a false start, which threw him back to ninth place.

Two more podium places in Germany: A catch-up race secured last year’s champions and Audi Sport drivers Kelvin van der Linde/Patric Niederhauser the first podium result of the season in the ADAC GT Masters on the second weekend. The Swiss Niederhauser started the race at the Nürburgring and handed over the cockpit of his Audi R8 LMS in the middle of the race when he was eighth. Then van der Linde started to catch up and only fought his way to the podium in third place on the final lap. For the second race, the South African secured first place on the grid and thus the Pirelli Pole Position Award, which was presented for the first time. Despite the fastest race lap, van der Linde/Niederhauser had to settle for tenth place due to a drive-through penalty. Dries Vanthoor, however, was another Audi Sport driver on the podium. The Belgian had started from second place with his compatriot Charles Weerts and finished second. Weerts thus also won the Pirelli Junior classification. The victories in the Pirelli Trophy classification, in which professionals are excluded, went to Audi privateers in both rounds, too. Filip Salaquarda from Team ISR won the prize on Saturday, WRT driver Rolf Ineichen on Sunday. Best in points in this classification is Elia Erhart from Team EFP Car Collection by Tece who is another private Audi driver. A total of 15 Audi R8 LMS cars from eight teams competed in the Eifel – more GT3 sports cars with the four rings on the bonnet than ever before in this racing series.