Four in the top five: Audi strong on the island 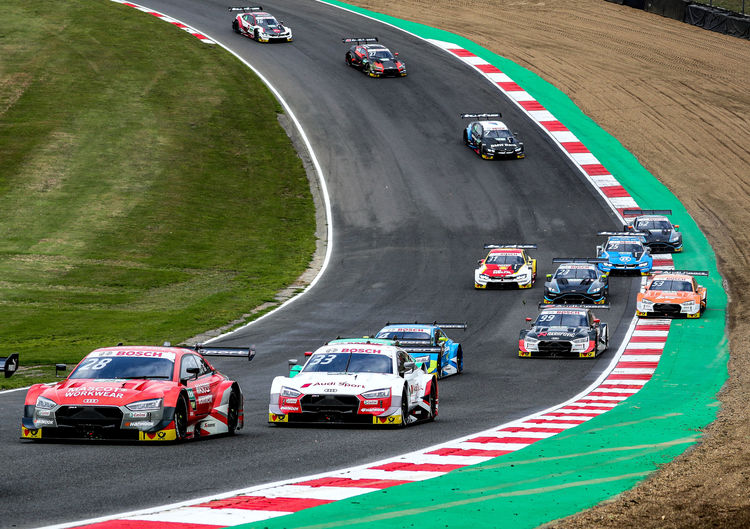 With a strong team result in Saturday’s race at Brands Hatch (England), Audi has maintained, respectively extended the lead in all three championships of the DTM. With René Rast in second and Nico Müller in third position, two Audi drivers, in the eleventh race of the season, stood on the podium for the tenth time.

Rain showers and squalls made for changeable and partly hard-to-predict conditions at Brands Hatch on Saturday. In the end, Marco Wittmann (BMW), René Rast und Nico Müller – the drivers maintaining the top three spots in the drivers’ championship as well – again stood on the podium.

In the partly wet qualifying, René Rast in the battle for pole position only had to admit defeat to Marco Wittman by 69 thousandths of a second. In the race, after 42 laps, the driver from Audi Sport Team Rosberg was only 0.374 seconds short of claiming another victory. “Two laps more would likely have been enough for me,” said Rast, who managed to catch up with Wittmann on the last lap but was not able to overtake him. “I was probably too conservative with the tires today. After the experience at Assen, I didn’t know exactly how hard I could push them. Now we’re going to focus on maximizing everything for tomorrow.”

After a less than optimal qualifying, Nico Müller from Audi Sport Team Abt Sportsline made up ground from eighth on the grid to third position and, as a result, defended his second place in the drivers’ standings behind championship leader René Rast. “The key to this was a good start,” said the Swiss. “Afterwards, the strategy was right and I was able to manage my tires well. That made it possible for us to clinch third position today. After the qualifying, we can be happy with that. We know what we have to work on for tomorrow. We can definitely still improve the car’s balance. Plus, we saved a set of tires today – that’s positive for tomorrow, too.”

Assen winner Mike Rockenfeller finished Saturday’s race in seventh position. Jamie Green, in eleventh, just barely missed scoring points after a two-stop strategy did not pan out for the Briton.

DTM rookie Jonathan Aberdein from the customer team WRT Team Audi Sport in ninth position scored points for the fifth time this year even though, after an accident in qualifying, he had to start from the last spot on the grid. Pietro Fittipaldi was unable to run in the race because his Audi RS 5 DTM was too heavily damaged in a nearly simultaneous accident in the notorious Paddock Hill Bend. Fittipaldi was not injured.

“With positions two, three, four and five, this was another very good team result for us,” said Head of Audi Motorsport Dieter Gass. “Obviously, we also wanted victory and in the end it was really close. But for a race win everything has to fit and that wasn’t the case today. On the whole, we can be happy today. We continue to lead all three championships. That’s what we’re going to build on in order to strike back tomorrow.”

The second race at Brands Hatch will start on Sunday at 1.30 PM local time (2.30 CEST). SAT.1 will start to air live coverage from England at 2 PM CEST.