Four Audi A4 DTM cars among top-six at Spa 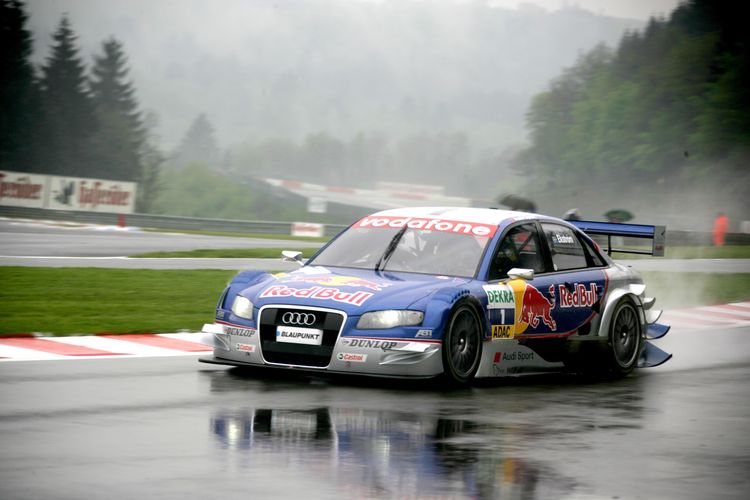 With rain pouring down, the Audi drivers managed to lock in a good starting base for the DTM race at Spa-Francorchamps (Belgium). Four Audi A4 DTM cars will start from the first three rows at 2 p.m. on Sunday. The quickest driver in the Super Pole Qualifying of the top ten was the current DTM champion Mattias Ekström (Audi Sport Team Abt Sportsline), who claimed second place on the starting grid. Christian Abt and Pierre Kaffer, with positions three and five, netted the best Qualifying results achieved by Audi Sport Team Joest in the DTM to date. The two Germans were the only drivers to qualify for the Super Pole with cars from last year.

Tom Kristensen secured sixth place on the grid in these extremely difficult conditions. Allan McNish, Martin Tomczyk, Rinaldo Capello and Frank Stippler will start the race from positions 13, 14, 18 and 20. ARD will broadcast live on Sunday, starting at 1:45 p.m.

Mattias Ekström (Audi Sport Team Abt Sportsline #1)
2nd place Super Pole, 2m 33.292s
“I’m very pleased to be starting from the first row for my first race at Spa. I’m more than satisfied with my second place because if it rains the prerequisites are never the same for everyone. I didn’t make any mistakes in my Super Pole lap and never had the feeling of being too slow. It was just a question of how much you’d risk in the fast corners. And I didn’t want to risk too much.”

Christian Abt (Audi Sport Team Joest Racing #14)
3rd place Super Pole, 2m 33.991s
“Starting from third place is a small reward for the whole team which had to work late into the night after yesterday’s fire to repair my car. In the rain it was absolutely perfect today. Of course, on a dry track I’ll be lacking the experience I’d have gained without the time loss on Friday.”

Pierre Kaffer (Audi Sport Team Joest Racing #15)
5th place Super Pole, 2m 34.304s
“This morning I was last in the Free Practice – fortunately, we found out what was wrong with the car well in advance of the Qualifying. I have to thank Audi Sport Team Joest for not giving up. In the Qualifying session, my A4 was as good again as it had been during the tests before the season. Nevertheless, keeping the car on the track practically required my full attention. The conditions were highly critical, that’s why I’m hoping for a dry race tomorrow.”

Tom Kristensen (Audi Sport Team Abt #5)
6th place Super Pole, 2m 34.870s
“My lap didn’t start very well: in the ‘bus stop’ chicane there was dirt on the track, and in the first turn I slid onto the kerbs and couldn’t accelerate properly. That cost time before reaching Eau Rouge. After a third place in Qualifying, starting from sixth on the grid is not an ideal result. But in the Super Pole I simply didn’t have the same grip as in Qualifying.”

Allan McNish (Audi Sport Team Abt #6)
13th place, 2m 34.454s
“The Qualifying was a disappointment for me after I had been consistently quick in the Free Practice this morning. In my third Qualifying lap I had water under my wheels, causing me to lose over a second. Afterwards, there was simply too much water on the track, I just couldn’t drive any faster, I had nothing but aquaplaning all of the time.”

Martin Tomczyk (Audi Sport Team Abt Sportsline #2)
14th place, 2m 34.788s
“To put it simply, I was just too careful when I started my Qualifying practice. I didn’t expect the rain to be getting any worse. But it did, and that’s why nothing was working any more. That was clearly my mistake, I should have been pushing more from the very beginning.”

Rinaldo Capello (Audi Sport Team Joest #18)
18th place, 2m 36.366s
“In my first two laps, I caught up other cars, then my windscreen suddenly started fogging up. I had to go to the pits to have it cleaned. When I returned to the track, the conditions were simply too poor to let me improve my performance.”

Frank Stippler (Audi Sport Team Joest #19)
20th place, 2m 37.164s
“In Qualifying, just about everything went wrong. At in the beginning, I had to go to the pits because I was hardly able to see anything. Then yellow flags were shown three times. Also, I think that the tyres we were using were too new. They just didn’t achieve the level of grip I was familiar with from the Free Practice.”

Hans-Jürgen Abt (Team Director Audi Sport Team Abt Sportsline): “That was pretty much of a gamble today. Under these circumstances, things went well for Audi. Mattias is on the first starting row, Tom on the third – this makes us optimistic for Sunday. Despite the cold weather, the fans can look forward to a ‘hot’ race on a great track.”

Ralf Jüttner (Technical Director Audi Sport Team Joest): “A big compliment to Christian and Pierre, who drove fantastic laps, but to the whole crew as well: they managed to fix Christian’s car, which did get damaged quite a bit in yesterday’s fire. Also, we found the defect in Pierre’s car in time to correct it for the Qualifying. Now, we’re in a position that allows us to help Mattias and Tom in the race as well as scoring as many points as possible ourselves. ‘Dindo’ (Capello) and Frank had a bit of bad luck, but in view of the tight first turn maybe it’s not all that bad not to be in the middle of the field here.”

Dr Wolfgang Ullrich (Head of Audi Motorsport): “Four Audi cars among the first six – that’s a strong performance from the entire squad and a very good starting position for the race. The Scandinavian drivers with rally experience obviously are best able to handle such conditions. But even Christian Abt’s third place on the grid in last year’s car is a super result. Now, we’re anxious to see what weather conditions will be awaiting us for the race.”