{{ activeItem() }}
Twitter
07/11/20
SOUND ON: The Audi RS 5 DTM testing at @circuitspa. Have a great weekend! &gt;&gt; https://t.co/RoNVUt6n8i… https://t.co/VO6wvZw7yY
07/10/20
“All my life, I’ve dreamed about sitting in such a race car one day.” Mike Rockenfeller looking back on the 2012 Au… https://t.co/Hk47Riv1XG
07/10/20
Destination ADAC @gtmasters 2020. Our customers also joined us for testing at the @Lausitzring_de this week:… https://t.co/IdkSZCHzwf
07/10/20
More testing at the @Lausitzring_de: Audi Sport customer racing on track with the Audi R8 LMS this week, getting re… https://t.co/pNfnnWiFmF
Audi Sport on Twitter
{{ activeItem() }}
Facebook
06/30/20
10 races with thrills, spills, banter and more: Looking back on the first season of the RCCO #RaceHome charity racing series with our DTM factory drivers competing for a good cause. #RaceHome #AudiTogether #etron #StayHome #PerformanceIsAnAttitude #RaceAtHome
06/29/20
From the virtual RCCO #RaceHome season finale, to picking up his new ride and racing at the Green Hell – a fun week for Nico Mueller in his latest #DriversDiary. >> audi.com/DTM >> audi.com/GT3 #RaceHome #AudiTogether #etron #StayHome #PerformanceIsAnAttitude #RaceAtHome -------------------- Audi RS 6 Avant: Combined fuel consumption in l/100 km: 11,7 (20.1) – 11,5 (20.5); combined CO2 emissions in g/km: 268 (431.3) – 263 (423.3); Information on fuel consumption and CO2 emissions as well as efficiency classes in ranges depending on the tires and alloy wheel rims used. // www.audi.com/dat
06/25/20
“That was the car I really loved to drive. I felt really confident in the new A4.” Together with Mattias Ekström, we’re looking back on the era of the Audi A4 DTM – the car that scored 5 DTM drivers’ titles for us. >> audi.com/DTM #PerformanceIsAnAttitude #AudiTogether
06/24/20
The first season of the RCCO #RaceHome charity racing series is in the books. Check out our race highlights and broadcast from WeatherTech Raceway Laguna Seca: >> bit.ly/2Vb03ww #RaceHome #AudiTogether #etron #StayHome #PerformanceIsAnAttitude #RaceAtHome
Audi Sport on Facebook 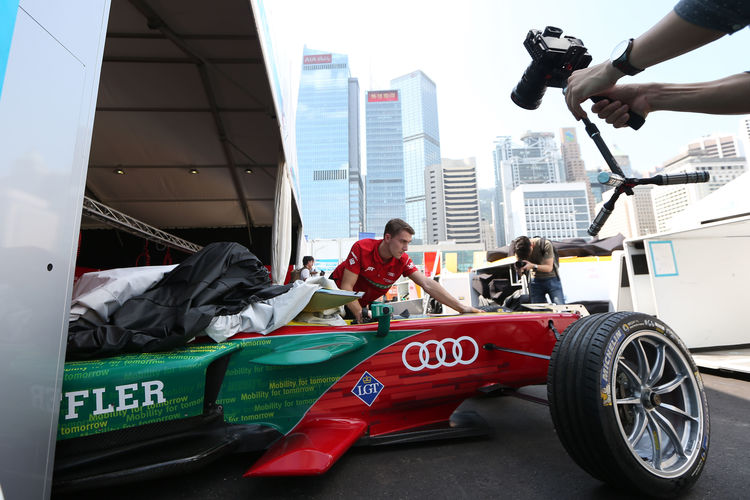 While the Audi DTM team is preparing for a thrilling finale at the Hockenheimring, the new Formula E season begins on Sunday, October 9. The electric race cars of Team ABT Schaeffler Audi Sport will compete in the Chinese metropolis of Hong Kong, under the banner of the Four Rings for the first time.

On the road to a fully factory-backed commitment, Audi is using the 2016/2017 season to learn more about the world’s first fully electric racing series and to prepare for the 2017/2018 season. The former Formula 1 driver and Le Mans winner Allan McNish has provisionally assumed responsibility for coordinating the Formula E project at Audi Sport in Neuburg, and will be on site at the season opener alongside the Deputy Head of Audi Motorsport, Dieter Gass.

Team ABT Schaeffler Audi Sport has prepared intensively for the new Formula E season, and has thoroughly tested the ABT Schaeffler FE02 electric race car. After the completion of the official tests at Donington Park on September 7, above all dyno tests were on the agenda. Both the team’s drivers, Daniel Abt and Lucas di Grassi, practiced on the near three-kilometer-long track in the Hong Kong harbor in the simulator and delivered valuable information for setting up the car and the software to the team’s engineers.

“Similar to the DTM, the Formula E race cars are homologated and cannot be altered during the season,” says Head of Audi Motorsport Dr. Wolfgang Ullrich. “At the same time, the software, which is so crucial to energy management in Formula E, can be constantly worked on. In this field, we have lots of experience from the FIA World Endurance Championship which we can use to support the team.”

In mid-September, the Formula E organization loaded the team’s four race cars onto a plane and shipped them to Hong Kong. They were delivered to the circuit this morning and handed back. In total, the team has sent about eight tons of material on the Formula E world tour.

The first step now is to set up the temporary pits in the paddock of the race track, which is located near the famous Star Ferry terminal in the Hong Kong harbor. Subsequently, the team will start working on the race cars and present them to the FIA for technical scrutineering, including the sealing of the motors, inverters, transmissions and other components.

On Saturday, October 8, from 15:00 to 15:30, a brief shakedown session on the track is scheduled. On Sunday October 9, there will be two free practice sessions, as well as qualifying which is split between four groups, followed by a “Super Pole” – individual time trials by the quickest five. The first race of the new Formula E season begins at 16:00 (10:00 CEST). The opener of the third Formula E season will be broadcast on television worldwide in 120 countries, and hundreds of media representatives have been accredited.

At fanboost.fiaformulae.com, motorsport fans can help Daniel Abt and Lucas di Grassi in the race with their votes on the so-called “FanBoost.”. Through voting, three drivers each receive extra power for a short time, up to 200 kW (270 hp). In normal race conditions, the power output of the ABT Schaeffler FE02 is 170 kW (231 hp).

As an introduction to the Formula E opener, Audi Hong Kong invites ABT Schaeffler Audi Sport to a reception on Friday evening, October 7, in the showroom at the Admiralty Centre very close to the track.