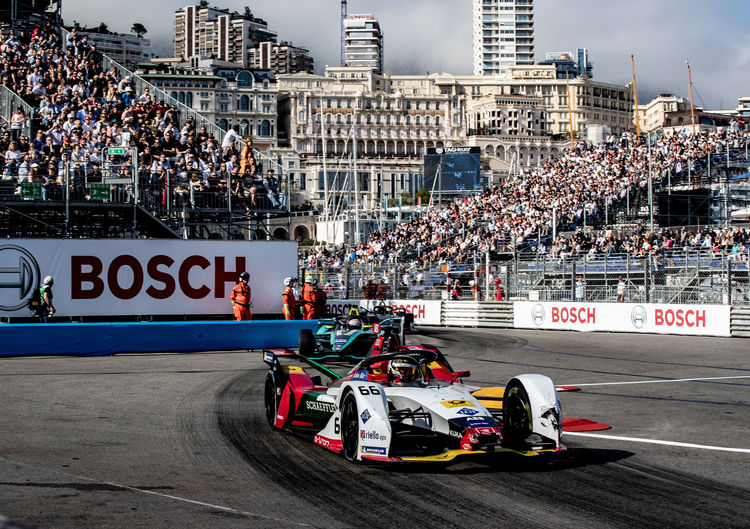 Lady luck was missing in the Monaco E-Prix for Daniel Abt and Lucas di Grassi. Despite strong performances, neither of the Audi drivers scored points in the race.

On the shortest track of the Formula E season, the qualifying sessions again played a key role. The leading drivers in the overall classification were once again disadvantaged, as they were the first to have to go out on the track. None of the initial group managed to make it into “Super Pole” of the fastest six drivers.

Lucas di Grassi had to settle for the thirteenth grid spot, with Daniel Abt sixteenth – on a racetrack where overtaking is extremely difficult.

Despite this, both drivers of the Audi Sport ABT Schaeffler squad managed to make up places in the race. Lucas di Grassi overtook several rivals and was running in eighth place when he was forced into the guardrails by BMW driver Alexander Sims and had to retire. “After the race, he told the stewards he hadn’t seen me,” said di Grassi. “If he leaves his line under braking, he has to make sure that no one is there. This retirement is extremely annoying, because we would have earned crucial points in the title fight today.”

Daniel Abt gave a spirited performance, which saw him plough through the field to finish eighth. However, after nudging Oliver Turvey (Nio), the German was later relegated back to fifteenth. “To make up so many positions in Monaco is virtually impossible,” said Daniel Abt. “That’s why the time penalty is particularly disappointing for me and the team. At the start of the full course yellow phase, a car in front of me braked so hard that I was simply powerless to avoid him.”

“We knew that these grid positions on such a narrow circuit would make the race extremely tough for us,” said Team Principal Allan McNish. “That Lucas retired in this way is bitter. He would definitely have finished in the top six. Daniel’s eighth place would at least have been a small consolation. To say we’re very disappointed would be an understatement.”

The Audi customer team Envision Virgin Racing also went home from Monaco empty-handed. Robin Frijns and Sam Bird both dropped out of the points ranking due to collisions in the final phase.

Berlin hosts the next Formula E round in fourteen days. At its home race there last year, the Audi Sport ABT Schaeffler team scored maximum points with a 1-2 victory, pole position and the fastest race lap.