Skip to content
Please participate in our survey and help us improve the Audi MediaCenter. Thank you!
Go to survey
06/09/18
Zurich
Motorsport 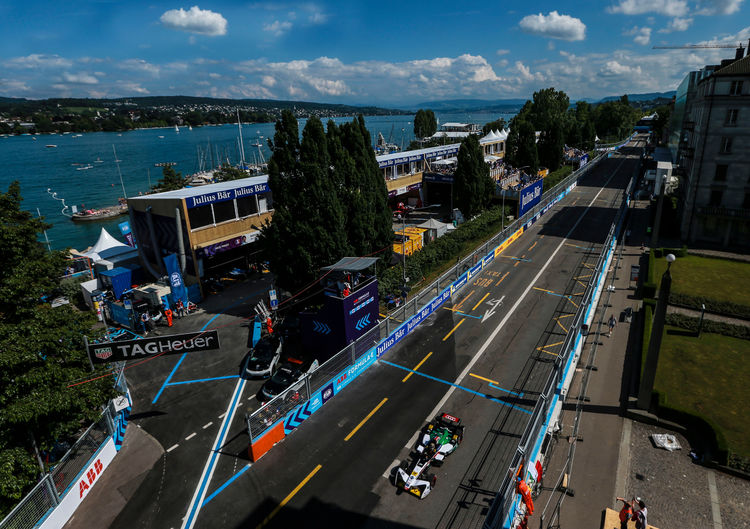 For the first time since 1954, an international circuit race is taking place in Switzerland. Consequently, the E-Prix in Zurich has produced a lot of hype this weekend.

Daniel Abt will again be on the Formula E grid together with Lucas di Grassi for Team Audi Sport ABT Schaeffler next season. Head of Audi Motorsport Dieter Gass confirmed this before the E-Prix in Zurich: “Daniel has been showing strong performances in succession this season and in my view has enormously developed further both on and off the race track.”

This weekend, Nico Müller is experiencing his second E-Prix after Morocco. The Audi DTM driver who mounted the podium at Budapest last weekend is supporting Team Audi Sport ABT Schaeffler as test and development driver in the simulator and in preparing the Audi e-tron FE05 for the new season.

Audi is celebrating the first international circuit race in Switzerland since 1954 with a special video that was disseminated via social media before the Zurich E-Prix: In the film, the Audi e-tron FE04 and the Audi e-tron Vision Gran Turismo cross the famous Klausen Pass on their way to Zurich. Hill-climb races such as the Klausen Race were permitted in Switzerland even during the ban of circuit races that was in effect since 1955.

The Audi e-tron Vision Gran Turismo will be deployed on the Formula E track at the E-Prix in Zurich on Sunday from 4.20 PM to 4.35 PM. Behind the wheel of the 600 kW (815-hp) electric race car concept will be Le Mans winner Dindo Capello. His most prominent passenger will be Swiss ski racer Lara Gut.

Daniel Abt and Lucas di Grassi had a lot of fun during a film shoot for Formula E: On the shore of Lake Zurich on Friday, they had exactly five minutes to assemble a model car from Lego bricks. Abt opted for a forklift truck and di Grassi for a Formula E race car.

Daniel Abt has been in Zurich since Thursday morning. The Audi factory driver visited the main office of LGT Bank and surprised the employees during a tour of the headquarters of Audi’s partner.

To kick off the Formula E weekend in Zurich the Swiss Audi importer invited some 220 guests to a Pre-Night at the hip Mascotte club on Saturday night – including numerous customers who pre-ordered the new Audi e-tron. Audi’s first fully electric production model will be launched on the market at the end of the year and is displayed at the race track and on billboard posters this weekend. The e-tron promotional campaign is billed as: “Watt is love!”