{{ activeItem() }}
Twitter
07/12/20
Podium at the Green Hell: Audi Sport drivers @M_Bortolotti, @ChHaase and @m_winkelhock piloted the #32 Audi R8 LMS… https://t.co/dHtAwoydju
07/12/20
Front row at the @Nuerburgring: @phoenix_racing will start from 2nd on the grid for today’s 4-hr NLS @vln_de race.… https://t.co/mChoXgcX4P
07/12/20
Three weeks before the 2020 @DTM season gets underway at @circuitspa. Check out the official season preview video:… https://t.co/4YbscKXM26
07/11/20
SOUND ON: The Audi RS 5 DTM testing at @circuitspa. Have a great weekend! &gt;&gt; https://t.co/RoNVUt6n8i… https://t.co/VO6wvZw7yY
Audi Sport on Twitter
{{ activeItem() }}
Facebook
06/30/20
10 races with thrills, spills, banter and more: Looking back on the first season of the RCCO #RaceHome charity racing series with our DTM factory drivers competing for a good cause. #RaceHome #AudiTogether #etron #StayHome #PerformanceIsAnAttitude #RaceAtHome
06/29/20
From the virtual RCCO #RaceHome season finale, to picking up his new ride and racing at the Green Hell – a fun week for Nico Mueller in his latest #DriversDiary. >> audi.com/DTM >> audi.com/GT3 #RaceHome #AudiTogether #etron #StayHome #PerformanceIsAnAttitude #RaceAtHome -------------------- Audi RS 6 Avant: Combined fuel consumption in l/100 km: 11,7 (20.1) – 11,5 (20.5); combined CO2 emissions in g/km: 268 (431.3) – 263 (423.3); Information on fuel consumption and CO2 emissions as well as efficiency classes in ranges depending on the tires and alloy wheel rims used. // www.audi.com/dat
06/25/20
“That was the car I really loved to drive. I felt really confident in the new A4.” Together with Mattias Ekström, we’re looking back on the era of the Audi A4 DTM – the car that scored 5 DTM drivers’ titles for us. >> audi.com/DTM #PerformanceIsAnAttitude #AudiTogether
06/24/20
The first season of the RCCO #RaceHome charity racing series is in the books. Check out our race highlights and broadcast from WeatherTech Raceway Laguna Seca: >> bit.ly/2Vb03ww #RaceHome #AudiTogether #etron #StayHome #PerformanceIsAnAttitude #RaceAtHome
Audi Sport on Facebook 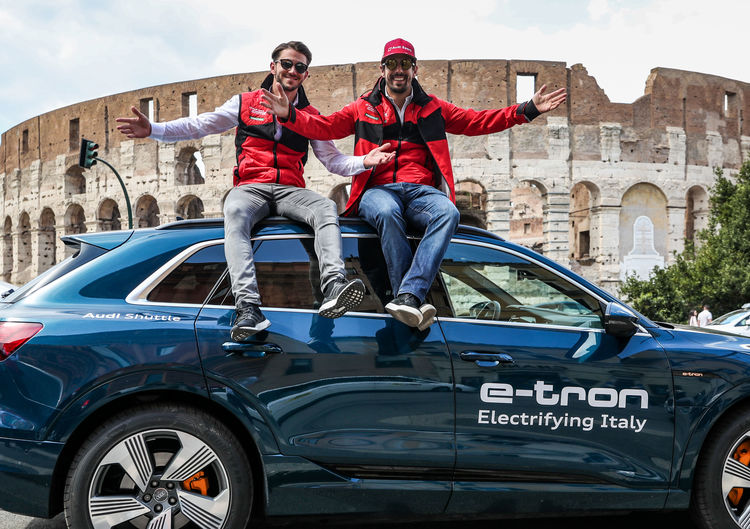 Formula E is back in Europe. ZDF will air live coverage of the E-Prix from the Italian capital on Saturday.

For the first time, German TV station ZDF will show a Formula E race on its main channel. Starting at 3.45 PM CEST, presenter Katja Streso and commentator Gary Paubandt will report live from Rome. Earlier on Saturday at at 11.30 AM, the qualifying session can be watched on a live stream at zdfsport.de. On the Tuesday before the race, ZDF-Morgenmagazin, the channel’s morning program, provided live reports during a visit to Audi’s Motorsport Department in Neuburg.

Italian ski racer and reigning Super G world champion Dominik Paris is one of Audi’s guests at the E-Prix in Rome. In total, Audi Italia is expecting nearly 200 guests this weekend.

A special mission for Daniel Abt and Lucas di Grassi: On Thursday, the two Formula E drivers ventured into Rome’s urban traffic as pizza delivery men on eco-friendly electric scooters. The mechanics and engineers of the Audi Sport ABT Schaeffler team were delighted about the pizza delivery, but criticized that the pizzas had suffered massive damage during the trip.

At the Audi booth in the trackside E-Village, fans are able to virtually pit themselves against Daniel Abt and Lucas di Grassi. In the Audi #unraceable VR Simulator,the Audi drivers set lap times on a fictitious race track that race visitors will be able to compare themselves against on Saturday.

For some of the members of the Audi Sport ABT Schaeffler team, the alarm clocks rang extremely early on Thursday morning: 4.30 AM was the departure time for a photo shoot with all of the Formula E race cars at the famous Spanish Steps in Rome.

Also in attendance in Rome is Fabio Passuello, CEO of Audi’s partner Riello UPS. The world leader in uninterrupted power supply and standby power supply solutions is using the Italian E-Prix for a congress on the topic of energy transition.

Emanuele Pirro is working as a presenter and commentator for the organizer of the race. The long-standing Audi factory driver lives on the outskirts of the Italian capital.