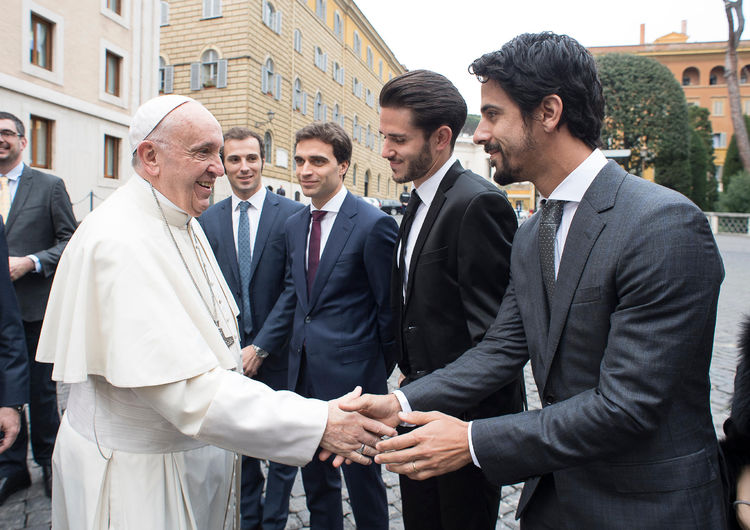 An audience with the Pope was the first highlight of Formula E’s premiere in Rome for Audi drivers Daniel Abt and Lucas di Grassi.

Daniel Abt and Lucas di Grassi have experienced a lot as race drivers. Even so, the two Audi drivers described their visit with Pope Francis on Wednesday as a “particularly unique experience.” Before the first E-Prix in the Italian capital, the head of the Catholic Church received all the drivers of the ABB FIA Formula E Championship. During the visit, the Pope also blessed the baby bump of Lucas di Grassi’s wife, Bianca. The Brazilian couple’s first baby is due in July.

Deployed for the first time this weekend as a race taxi at a Formula E event is the Audi e-tron Vision Gran Turismo. At the E-Prix in Rome, longstanding Audi factory driver and three-time Le Mans winner Dindo Capello is chauffeuring the guests of AUDI AG around the city circuit in the 600-kW (815-hp) electric race car concept. The first passengers on Friday were Formula E CEO Alejandro Agag and Italian Olympic snowboard cross gold medalist Michela Moioli.

The first European race of Formula E season 4 has attracted numerous guests to the Eternal City. Audi Italy in its Race Suite is expecting some 150 guests including Audi CEO Rupert Stadler. In addition, 120 guests of Team Audi Sport ABT Schaeffler’s partners are watching the E-Prix live at the venue in Rome.

Overall interest in the electric racing series is huge in the Italian capital. The 15,000 seats in the grandstands have been sold out for weeks. In total, the organizers are expecting a turnout of 30,000 spectators on Saturday.

With a length of 2.860 kilometers Rome is the second-longest Formula E track after Marrakesh. Daniel Abt and Lucas di Grassi know the circuit from the simulator and during Friday afternoon’s “track walk” gathered additional information. Both Audi campaigners were obviously thrilled by the fluid first track segment with its uphill and downhill sections. The narrow final section impressed them less.

Head of Audi Motorsport Dieter Gass will travel from Italy on to Spain on Saturday night. At the Circuit de Catalunya-Barcelona, the FIA World Rallycross Championship that is also planned to be held with electric race cars starting in 2020 kicks off this weekend. On Thursday, Thomas Biermaier, Director Sport at ABT Sportsline, and his Technical Director, Florian Modlinger, arrived in Rome directly from the pre-season DTM tests at Hockenheim.

Daniel Abt and Dieter Gass answered the questions of media representatives at the press conference of the Zurich E-Prix on Tuesday. All seats in the grandstands for the circuit race in Switzerland since 1955 are already sold. The organizers are expecting some 100,000 spectators. Audi DTM driver Nico Müller: “There’s a real Formula E hype in my native Switzerland.”

Next week, the second official group test of the second-generation Formula E cars will be held on the Spanish race track at Calafat near Barcelona. After Lucas di Grassi performed the first test at Monteblanco, Daniel Abt will be at the wheel of the new Audi e-tron FE05 this time.

Three of the most successful drivers from Audi’s Le Mans era are meeting in Rome: Allan McNish is Team Principal of Team Audi Sport ABT Schaeffler. Dindo Capello is driving the Audi e-tron Vision Gran Turismo. Emanuele Pirro, as an expert, is providing background information on Formula E and the Vision Gran Turismo electric sports car concept to Audi’s guests.