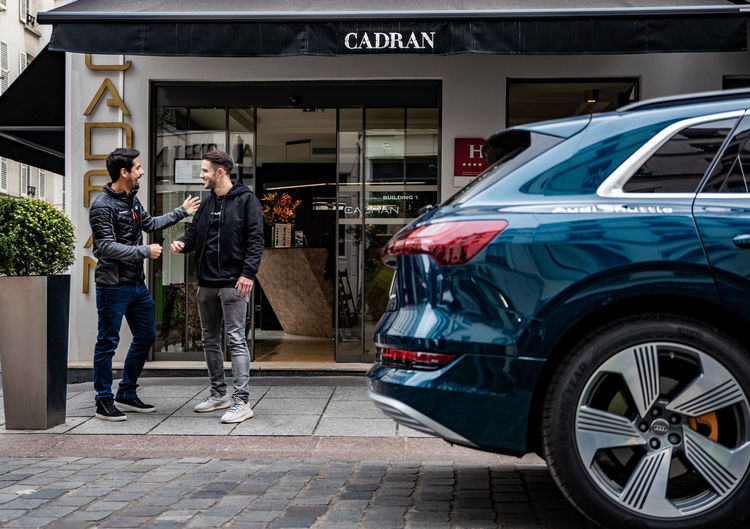 Formula E is visiting Paris, the capital of France. For the two Audi drivers, Daniel Abt and Lucas di Grassi, the race weekend began with a foray into the world of fashion.

For a PR commitment, Audi sent Daniel Abt and Lucas di Grassi in the new Audi e-tron on a shopping trip in Paris on Thursday. The two Formula E drivers were challenged to acquire elegant evening attire in the “city of fashion.” The tour produced some photos and film footage of the two race drivers of a kind that is rarely seen.

Elegant clothing was also called for at a cocktail reception at the location of the French Automobile Association FFSA on the Place de la Concorde. FIA President Jean Todt and Formula E’s founder, Alejandro Agag, welcomed delegates from all of the Formula E teams. The Audi Sport ABT Schaeffler team was represented by Head of Audi Motorsport Dieter Gass, Team Principal Allan McNish and Lucas di Grassi.

Between the two Formula E races in Paris and Monaco, Daniel Abt will not have a single free weekend. On Saturday (May 4), the Audi factory driver will chauffeur guests in the Audi RS 5 DTM race taxi during the DTM season opener at Hockenheim. On Sunday (May 5), he will support the Wings for Life World Run in Munich. At the world-famous running and wheelchair event, the Formula E star will drive one of the “catcher cars” that start 30 minutes behind the field and end their chase when they have overtaken all of the participants.

Once a year, Audi sends its factory drivers from the DTM and Formula E to an extensive fitness and health check at the Technical University Munich (TUM). For Daniel Abt and Lucas di Grassi, this appointment was scheduled between the races in Rome and Paris.

The Amazon series The Grand Tour inspired Audi’s team doctor, Vincenzo Tota, to embark on an automobile adventure of his own. In October, the Italian is planning to drive from London to Seville together with friends from the motorsport scene. Each participant will only be able to spend 1,200 pounds on the project – including the purchase of a second-hand car in England.

In Monaco, his adopted country, Lucas di Grassi witnessed the historic first victory of an Italian in a tennis tournament of the ATP Masters 1000 last Sunday. Fabio Fognini defeated Dušan Lajović 6-3 and 6-4 in two sets.

In his spare time, Lucas di Grassi built his own e-scooter with a twin motor set-up and 12 kW of power output. The rollout in Monaco was successful and caused no casualties, the Brazilian reported.

To commute between the race track and the hotel, many members of the Audi Sport ABT Schaeffler team are using e-scooters offered by the ride sharing providers that are found everywhere in the French capital.

This year, Loïc Duval, one of Audi’s factory drivers in the DTM, is again serving as an expert for the French Canal+ TV channel during the E-Prix in Paris. The Frenchman himself was active in Formula E as a driver from 2015 to 2017.

German TV channel ZDF’s reporter Volker Grube will be trackside at a Formula E event for the first time. ZDF will provide live streaming of the race in Germany at zdfsport.de on Saturday, beginning at 3.45 PM CEST. As always, the E-Prix will also be broadcast live on Eurosport.

In Paris, Audi is again represented with its own booth at the trackside E-Village. One of the highlights is the Audi #unraceable VR Simulator on which race visitors are able to drive the Audi e-tron on a fictitious race track.