{{ activeItem() }}
Twitter
10/24/21
Victory in the @OfficialChinaGT at Zhuhai: Team X Works took a win with the #91 Audi R8 LMS driven by Rio Ma and Da… https://t.co/twq50Msmcl
10/24/21
Audi 1-2-3 in @OfficialChinaGT at Zhuhai: The FAW-VW Audi Racing Team won race 2 with the #99 Audi R8 LMS of Cheng… https://t.co/kFECarj6Uc
10/23/21
Podium at the Hockenheimring: Audi Sport driver @MiesChris and teammate Ricardo Feller finished runner-up in the fi… https://t.co/3qQ6HYsB7e
10/23/21
Victory in the @OfficialChinaGT at Zhuhai: The FAW-VW Audi Racing Team took a win in race 1 with the #99 Audi R8 LM… https://t.co/sT9I5UpJcB
Audi Sport on Twitter
{{ activeItem() }}
Facebook
10/21/21
Next highlight on our Road to Dakar: The first of the three new Audi RS Q e-tron* being assembled to run in the 2022 Dakar Rally had its roll-out with Mattias Ekström and EMIL Bergkvist on our new off-road test track in Neuburg this week. >> audi.com/Dakar #FutureIsAnAttitude #RSQe-tron #RoadToDakar #Dakar2022 -------------------- *This vehicle shown here is the Rally Dakar vehicle that is not available as a production model. Closed course, professional driver. Do not attempt.
10/19/21
Meet our driver crews for the Dakar Rally: 🇫🇷 Starting with the reigning winners – Mr. Dakar himself Stéphane Peterhansel and his co-driver Edouard Boulanger. >> audi.com/Dakar #FutureIsAnAttitude #RSQe-tron #RoadToDakar #Dakar2022
10/18/21
In addition to Audi Sport customer racing’s victory at the Indianapolis 8 Hour, our customers around the world also clinched numerous podium successes in GT and touring car racing with our four models – highlighted by Comtoyou Team Audi Sport winning again with the new Audi RS 3 LMS. 🇫🇷 🇩🇪 🇺🇸 🇩🇰 🇨🇳 🇮🇹 🇯🇵 🇵🇹 🇳🇿 >> audi.com/GT3 >> audi.com/GT2 >> audi.com/GT4 >> audi.com/TCR #PerformanceIsAnAttitude
10/18/21
In the final episode, Audi DTM racing driver Nico Mueller and rallying legend Fabrizia Pons go beyond what it means to be a winner. Discussing that it’s not just about the car you drive but about the passion which fuels you. #Audi #quattroMoments -------------------- Audi RS e-tron GT: Power consumption combined: 20.2-19.3 kWh/100km (NEDC); 22.5-20.6 kWh/100km (WLTP); CO2 emissions combined: 0 g/km. Information on fuel/electricity consumption and CO2 emissions in ranges depending on the equipment and accessories of the car. Further information: www.audi.com/dat
Audi Sport on Facebook 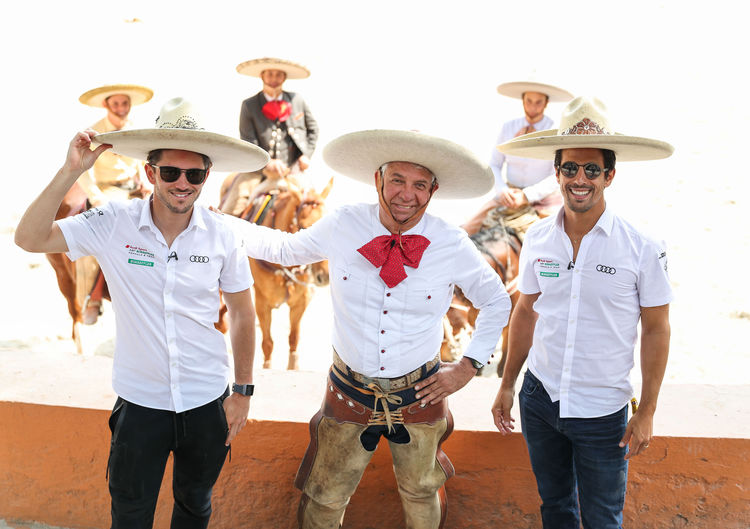 By giving the traditional Mexican sport of the charreada a try, the two Audi drivers, Daniel Abt and Lucas di Grassi, got in the mood for the E-Prix in Mexico City (start on Saturday at 4 PM local time/11 PM CET, live on Eurosport and ZDF live streaming).

On Thursday, the winners of the last two E-Prix events at Autódromo Hermanos Rodríguez were initiated by a local charro into the art of the popular competition with horses that is similar to rodeo. Wearing typical Mexican sombreros, the two drivers of the Audi Sport ABT Schaeffler team also had the chance to try their skills at lasso throwing.

After the hottest race in Formula E history, another hot race awaits the drivers in Mexico City. However, compared to the 37 degrees centigrade in Santiago three weeks ago, the forecast temperatures of 29 degrees in the shade are almost moderate. Due to the many right-hand turns and load reversals on the race track in Mexico City, the left rear tire is particularly stressed. With a length of 612 meters the circuit has the longest straight of the season to date, at the end of which the Audi e-tron FE05 will reach a top speed of 232 km/h, according to simulations.

During a visit to the Ibero-American University in Mexico City on Thursday, Audi driver Lucas di Grassi explained the special characteristics of the electric racing series and the progress made in electric mobility to some 200 students. In the meantime, his teammate and last year’s winner, Daniel Abt, visited the local logistics center of Audi’s partner DHL where he received an enthusiastic welcome by the DHL employees.

Several hundred Audi customers from all over Mexico will be keeping their fingers crossed for Daniel Abt and Lucas di Grassi on Saturday. At an Audi driving experience on Friday, they got a taste of the latest Audi Sport models on the race track.

For the first time this season, Prof. Peter Gutzmer, Executive Board Member of Audi’s technology partner Schaeffler, will be watching a Formula E race live at the venue.