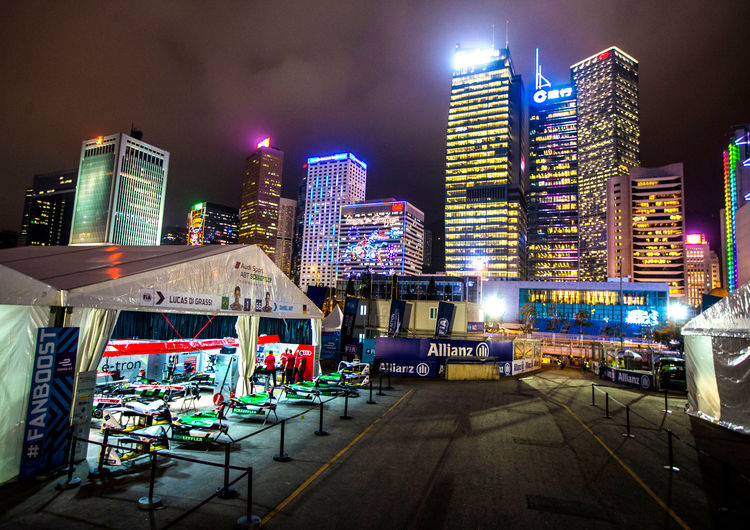 For Team Audi Sport ABT Schaeffler, racing begins in earnest this weekend when the new Formula E season kicks off in Hong Kong.

Hong Kong is hosting the Formula E season opener for the second time. The organizers expect a total turnout of more than 40,000 spectators on both race days this year and have long-term plans for the electric racing series. “We want to make our event the Monaco of Formula E,” says Alan Fang, CEO of Formula E Racing (Hong Kong) Ltd.

The press center in Hong Kong is bursting at the seams as well. More than 500 members of the media have accredited themselves for the Formula E season opener.

There is hardly another paddock in the world delivering pictures at night as spectacular as the one in the Hong Kong harbor. This year, photographers can look forward to even better photo subjects. In parallel to the Formula E race, a new version of the famous “A Symphony of Lights” multimedia show is celebrating its premiere along the skyline of the Asian metropolis.

Daniel Abt and Lucas di Grassi used the Chinese popular sport of tai chi to gear up for the Formula E season opener. Hong Kong’s only tai-chi teacher inducted the two Audi campaigners into the secrets of the martial art that millions of Chinese as well as people around the world practice primarily for relaxation and meditation.

For Wolfgang Ullrich, the Hong Kong E-Prix is a special event, as these will be the last two races before Audi’s longstanding head of motorsport enters retirement. Ullrich had handed over his duties to his successor, Dieter Gass, as farback as in January.

Ernst Moser is visiting Formula E in Hong Kong as well. The team principal of Audi Sport Team Phoenix from the DTM specifically scheduled a business meeting in Asia so that he is able to watch the season opener of the electric racing series.

The Audi e-tron FE04 cars can be seen in Hong Kong for the first time sporting their final liveries. Following the presentation in Neuburg and the pre-season tests at Valencia, a few more details were changed. They include the visual design of the wheels of the electric race cars. Daniel Abt is now driving with red and title defender Lucas di Grassi with green stripes. The different colors are meant to make it easier for spectators to distinguish the cars.

Even before his 25th birthday on SundayDaniel Abt received gifts from his fans in the Hong Kong paddock, including a homemade cake. On Thursday, the new Audi factory driver visited the headquarters of LGT Bank in Hong Kong. Abt is a brand ambassador of the Liechtenstein private bank, was busy signing autographs for the staff during his visit, and posed for plenty of selfies with them.

In the 2017/2018 season, three drivers will again receive a one-time power boost of 100 kJ at the push of a button in each race. Fans can vote for their favorite driver on fanboost.fiaformulae.com and Twitter. On Friday, Daniel Abt maintained second place in the fanboost voting.

TV channel Eurosport will air live coverage of all Formula E races in most European countries. Co-commentator of the German Eurosport broadcast this weekend will be Rahel Frey who has gathered ample Asian experience in the Audi R8 LMS Cup. Coverage will begin both on Saturday and Sunday at 7:45 AM CET.