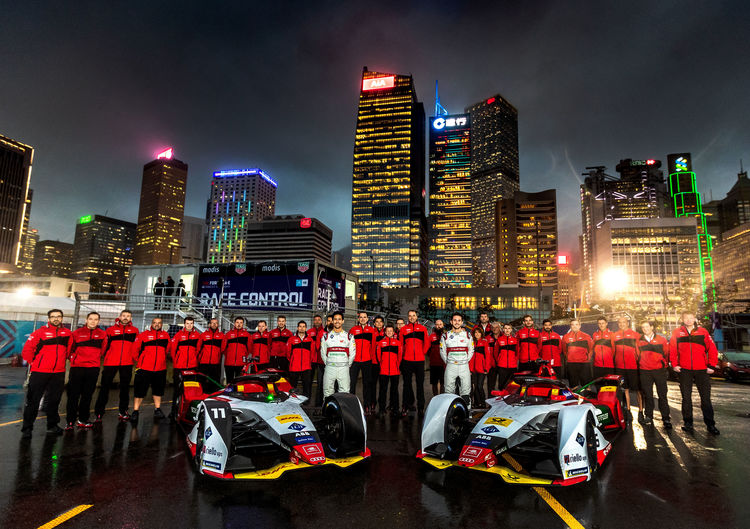 The weekend celebrating the 50th Formula E race in Hong Kong began with a presentation of the new Audi e-tron* on Friday night.

Some 300 Audi customers attended an exclusive premiere of the first fully electric model from the brand with the four rings at the Audi Hong Kong dealership. The Audi e-tron was unveiled by Allan McNish, Team Principal of Audi Sport ABT Schaeffler, and Lothar Korn, Managing Director of Audi Hong Kong. Daniel Abt and Lucas di Grassi signed models of the sporty Audi SUV for the guests, gave plenty of autographs and fulfilled many wishes for selfies.

Formula E is celebrating its 50th race this weekend. According to the weather forecast, it might become the first race in the history of the electric racing series to be held in the rain. A number of planned PR activities on Friday were cancelled due to the bad weather – including a film shoot with the two Audi drivers at the Hong Kong harbor, among other things.

The Audi Sport ABT Schaeffler team used the unique setting of the race track in the heart of Hong Kong on Friday night for a somewhat unusual team photo in the dark and more spectacular pictures were also taken with the Audi e-tron FE05.

For the 50th race of Formula E, a logo celebrating this special event of the racing series has been created, which also depicts the two Audi e-tron FE05 cars of Daniel Abt and Lucas di Grassi.

Media interest in Formula E’s third appearance in Hong Kong is huge. More than 50 journalists registered for the event via the Audi importers in China, Hong Kong and Japan alone.

For the first time, a Formula E race will be broadcast live in the United Kingdom on BBC. In Germany, the 50th race can be watched as usual on Eurosport and, for the first time, on an ARD live stream (www.daserste.de). The race starts on Sunday at 4 PM local time (9 AM CET).

Following the shakedown on Saturday, Allan McNish and other team principals of the electric racing series went for a cruise on board of a typical Chinese junk. During a harbor tour, they talked to a group of British journalists about the special characteristics of Formula E.

Although Formula E will hold its sixth race of the season on Hainan Island in China in two weeks’ time, only a few team members will stay in Asia between the races in Hong Kong and Sanya. Allan McNish will fly home for one day before traveling on to Florida: The Scot is the Grand Marshal for the sports car race at Sebring. Between Sebring and Sanya, McNish will also be spending only one day at home.

Audi’s appearance at the Geneva International Motor Show was fully focused on electric mobility. The Audi e-tron FE05 was also showcased at the Audi booth.

... Audi was the first German automobile manufacturer with a factory commitment in Formula E and immediately won the teams’ classification in the 2017/2018 season?

... Lucas di Grassi on September 13, 2014, in Beijing (China) won the first ever Formula E race in history, as well as the 49th three weeks ago in Mexico City?

... Daniel Abt and Lucas di Grassi are the only driver pairing in the field to have contested all 49 races as teammates?

... the Audi Sport ABT Schaeffler team with 37 podium finishes and 954 points is clearly number one in the electric racing series?

... Daniel Abt and Lucas di Grassi have won eleven of the 49 Formula E races?

... three other victories of the team were retrospectively disallowed due to minor infringements of the regulations?

... Lucas di Grassi in Punta del Este last year had to pay a 10,000-euro penalty because he wore only a pair of boxer shorts at about 30 degrees centigrade, instead of the mandatory fireproof long johns under his racing suit?

... Lucas di Grassi always finished in the top three of the Formula E’s overall drivers’ classification, became champion in 2017 and had title chances up until the last race three times?

... Lucas di Grassi has the shortest travel distance to a Formula E race? In Monaco, the apartment of the driver, who lives in the principality, is located only 200 meters away from the start-finish straight.

... Daniel Abt and Lucas di Grassi achieved a so far unrivaled feat in Berlin in 2018? On clinching a one-two result, pole position and setting the fastest race lap, they scored the maximum number of points to be awarded on a race day.

... Daniel Abt, following his triumph at his home round, returned to the hotel only at 6 in the morning where, of all people, he ran into his team principal, Allan McNish, who was busy checking out?

... Daniel Abt regularly reports about Formula E on his YouTube channel and by now has nearly 250,000 subscribers?