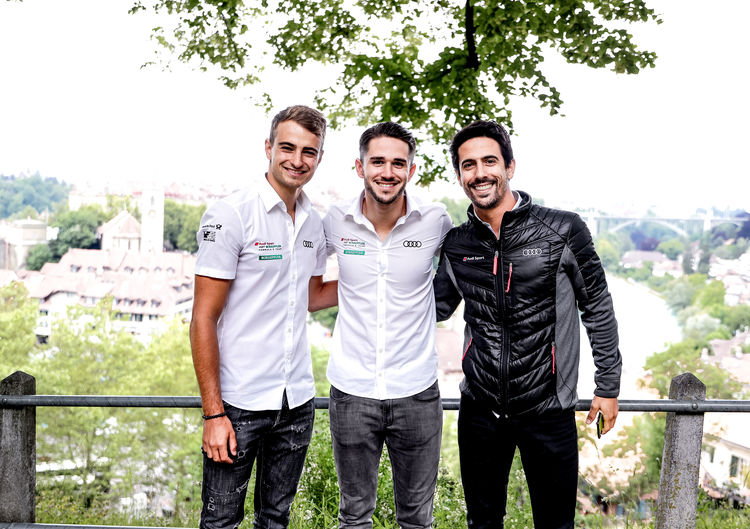 Formula E is visiting Bern for the first time this weekend. The roller coaster track in the Swiss capital is regarded as one of the most challenging in the history of the electric racing series. The E-Prix on Saturday starts later than usual, at 6 PM, and will be broadcast live on Eurosport and on an ARD live stream.

“This track is really hardcore,” said Audi driver Lucas di Grassi after the official track walk on Friday morning. “There are hardly any run-off areas and there’s no room for mistakes. The circuit seems like a kind of mini Macau.” Daniel Abt’s eyes were also shining at the track walk: “This circuit is exactly my thing.”

Lucas di Grassi experienced another extreme on Thursday. At a TV shoot for CNN’s “Supercharged” program, the runner-up in the Formula E standings had the opportunity to ride in the world’s largest electric vehicle. The eDumper, weighing 110 metric tons, hauls lime and marlstone and while traveling downhill generates more energy than it needs for the uphill stretch. The surplus energy is fed into the power grid.

Normally, test and development driver Nico Müller supports the Audi Sport ABT Schaeffler team in the simulator during its preparation. However, the Swiss did not want to miss out on the E-Prix in his hometown, Bern, under any circumstances and even passed up the opportunity to compete in the 24-hour race at the Nürburgring. Müller is supporting the team at the event in Bern and served as a guide for Daniel Abt and Lucas di Grassi for a tour of Bern on Thursday.

In a movie theater in downtown Bern, the Audi Sport ABT Schaeffler team got into the mood for the final stage of the Formula E season on Thursday night. Several commercial parodies that also featured a number of team members raised lots of laughter.

Daniel Abt’s mother, Margit, is visiting him in Bern. Lucas di Grassi is accompanied by his wife, Bianca and son, Leonardo.

Some of the team members arrived in Bern on Thursday night with a long delay: severe weather had grounded aircraft in Germany for some time. The weather might also play an important role at the E-Prix in Bern: thunderstorms have been forecast for Saturday afternoon.

Logistically, the first E-Prix in Bern is a big adventure for the teams. The track and the pit lane are some 800 meters away from the paddock, which is located in the trade show hall of the BernExpo. It is the first indoor paddock in the history of Formula E and provides a pre-taste of the race in London next year that will be partially held indoors.

Before the Formula E race, the Swiss Audi importer AMAG opened the Audi e-tron experience center at Utoquai in Zurich that will provide information and host events focused on electric mobility until the end of the year. Daniel Abt and Head of Audi Motorsport Dieter Gass talked about Audi’s Formula E commitment at the official opening ceremony.