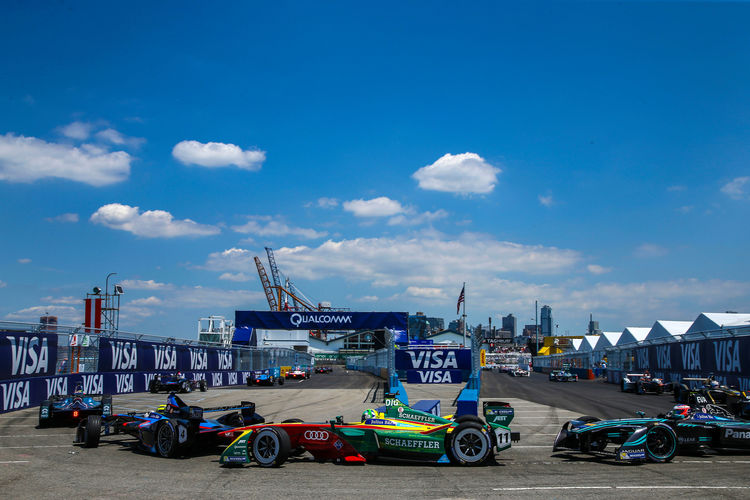 Audi driver Lucas di Grassi scored 22 points in both races during the Formula E premiere in New York. After two difficult qualifying sessions, the Brazilian fought back to take fourth and fifth place with some spectacular overtaking maneuvers. Team mate Daniel Abt was slowed by technical defects.

Formula E celebrated a successful New York premiere in the shadow of a great backdrop in the Brooklyn harbor district opposite the Manhattan skyline. Lucas di Grassi finished fourth after starting Saturday’s race from tenth on the grid, a day later he fought from ninth up to fifth place. For the season finale in Montreal, Canada on the final weekend in July, the 32-year old travels as second placed driver only ten points behind championship leader Sébastien Buemi. 58 points are still to be awarded in Canada.

Team mate Daniel Abt started Saturday with second on the grid and, after initially holding the lead, ran third on the last lap when his car rolled to a stop a few meters from the finish line because of an error in the battery management system, and was classified only 14th. After qualifying eighth on Sunday, the German stopped on the first lap of the second race with a similar problem. After a slow drive back to the pits, Abt swapped to the second car and claimed the point for the fastest race lap.

A fourth and a fifth place in New York: what was missing for you this weekend to finish on the podium?
Lucas di Grassi: “I’d love to know myself. We have to analyze the data and make sure that we are in a better position again for the finale in Montreal. We weren’t fast enough in New York to be able to win. With a little more luck it could have been two podiums, but not more. We did what we could and under the circumstances I’m very satisfied with the results. After all I made up 22 points. It wasn’t a wasted weekend. We are still in the thick of the title battle and will try to make the best of the situation.”

How do you rate your chances of winning the title?
“It’ll be difficult, but we’ll try everything. It is psychologically important that I can win through my own efforts in Montreal: if I win both races I’m Champion. Then there’s no need to worry about the mathematical chances. This is exactly what we’ll try to do.”

Are two wins really possible in Montreal?
“In New York we have seen once again just how unpredictable Formula E is: before this weekend, Sam Bird was nowhere in the Championship and then he wins both races. I just need to find out which water he drank and merely drink the same before Montreal …”

Do you already know the circuit in Montreal?
“From the simulator, yes, in reality we’ll get to know it only on the first race day. On paper it looks splendid. I’m really looking forward to Montreal.”

How will you all prepare over the next two weeks?
“We’ll go into the simulator again, drive the track in Montreal and make sure that all the settings on the car are correct, and that we arrive at the finale well prepared. We’ll do everything for this and fight hard for victory.”

Back to New York: how did you like the premiere?
“It was fantastic to have raced in this incredible city and to have written a piece of motorsport history. The first race in such a city is always something very special. It was a great event, but my thoughts were obviously entirely focused on my fightback in the title battle.”