Skip to content
We are using cookies for a better user experience.
06/17/19
Neuburg a. d. Donau
Sport

Formula E: Audi in the thick of the title race

{{ activeItem() }}
Twitter
05/15/21
Goal! 40 to be exact. Congratulations @lewy_official on equalising the goal record for a single @Bundesliga_EN seas… https://t.co/75Zc9A9uCw
05/15/21
Illuminated words. Read more about the future of the language of light and how Audi is driving this force forward.… https://t.co/MAx5XwZWVq
05/14/21
In recent and upcoming weeks, the first Audi e-tron GT vehicles are delivered to their new owners. The first Audi R… https://t.co/RHyzLNN6rh
05/14/21
Tracking down undesired noises: Which equipment helps Audi's Rustle and Rattle team to trace down, analyze and corr… https://t.co/ZksSl9nDU7
Audi on Twitter
YouTube
04/30/21 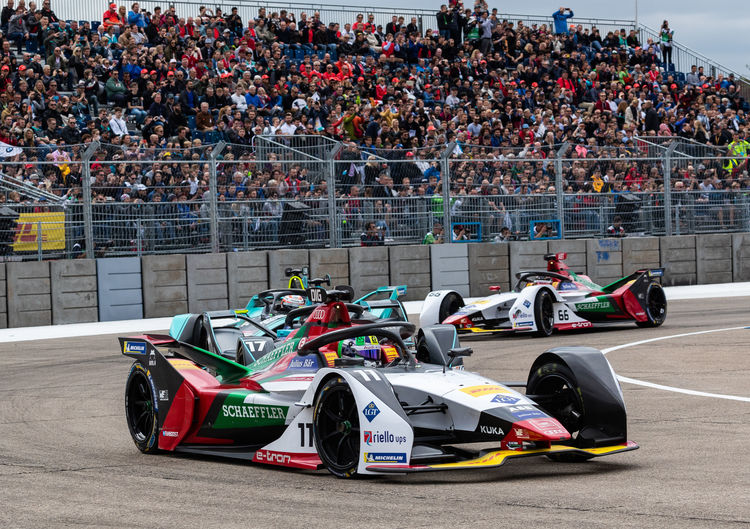 The title race in Formula E is intensifying: On Saturday (June 22), the electric racing series will hold the eleventh of thirteen races this season in Bern. In the teams’ and drivers’ classifications, Audi Sport ABT Schaeffler and Lucas di Grassi sit in second position, set to grab the top spot in the Swiss capital city.

Following the celebrated home victory at the last event in Berlin, Lucas di Grassi is only six points behind title defender and leader of the standings Jean-Éric Vergne. Only these two drivers have managed to win more than one race each this season. In the teams’ classification, Audi Sport ABT Schaeffler is also within striking distance. With another strong performance by di Grassi and Daniel Abt, the team is in striking distance for the showdown in New York City. The final weekend in mid-July will be a double-header event.

“Berlin was a very special day for all of us. Now we need to take the momentum of success with us to Bern and up the ante there,” says Lucas di Grassi, who with ten victories and thirty podium finishes under his belt, is the most successful driver in Formula E’s history so far. “That we’re in the thick of the title race at this stage of the season is the result of all of the hard work done by the entire team. Switzerland is a good venue for us, because we won there last year. That’s our aim again – and if we shouldn’t achieve it, we want to at least take home as many points as possible.”

Whereas Formula E raced in Zurich in 2018, Switzerland’s capital city is now hosting the event. The 2.750-kilometer circuit close to the old town and along the Aare River features a mix of fast sections and narrow 90-degree turns. “The track is on the calendar for the first time and it is new for all of us,” says Daniel Abt. “Like all of the teams, we have prepared intensively in the simulator, but on Saturday it will be crucial to adjust the setup to suit the track as fast as possible.” Abt has scored points in eight of ten races this season – thus setting a record in the field. “Last year, the fans in Switzerland were incredible and the crowd provided a tremendous backdrop for Formula E. My big aim is to stand on the podium again on Saturday.”

Taking the championship battle to New York with a strong performance as a team in Bern – this is Team Principal Allan McNish’s call to action. “The gaps in the drivers’ and teams’ championships are very small. Our whole squad is ready and fully focused on taking the momentum from Berlin to the next race.” The new circuit poses a true challenge. McNish: “The track’s characteristics are totally different to any of the others on the calendar. Especially the steep up-downhill sections which will be really good to watch. We’re all looking forward to our next visit to Switzerland – the event last year was one of the season’s highlights, not only thanks to Lucas’ victory.”

Before the eleventh of thirteen races, di Grassi is in second place in the driver’s championship with 96 points. His teammate, Daniel Abt is in seventh, only 29 points behind di Grassi. 25 points are awarded for victory, three for pole position and one point for the fastest race lap driven among the top ten finishers. Besides the Audi Sport ABT Schaeffler factory team, the Envision Virgin Racing customer team with Sam Bird and Robin Frijns also races with the e-tron FE05 that has been jointly developed by Audi and technology partner Schaeffler. The British team is currently in third place in the teams’ championship.

On Saturday, the eleventh Formula E round in Bern starts at 6 PM as a matter of exception and, as usual, will last for 45 minutes, plus one lap. The race was sold out within just a few hours. As always, Eurosport is going to air live coverage. All international channels, including broadcast schedules, can be found online at www.fiaformulae.com.