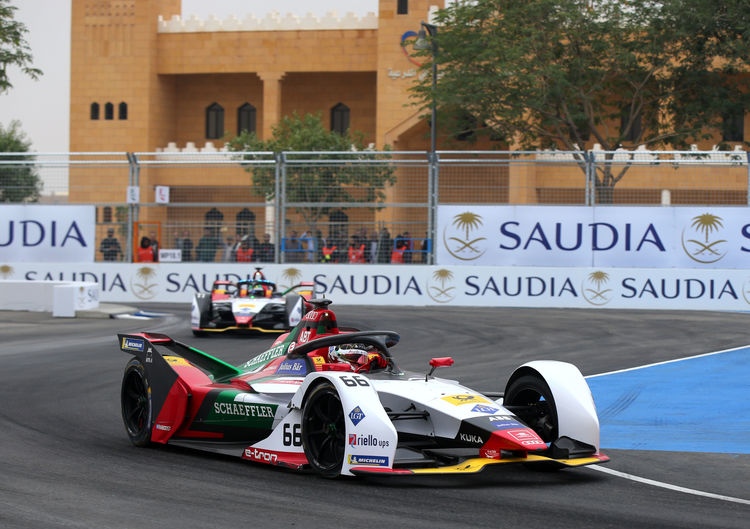 Audi Sport ABT Schaeffler scored points with both cars at the Formula E season opener in Ad Diriyah (Saudi Arabia). Following a chaotic qualifying session, Daniel Abt and Lucas di Grassi fought back from eleventh and eighteenth on the grid to finish eighth and ninth.

At the season opener in the desert, the teams had expected anything but rain which, on Saturday morning, resulted in just one short free practice session taking place, instead of the two scheduled sessions. To top things off, this track time was interrupted by red flags. Qualifying, which is normally divided into a group phase and a Super Pole shootout of the six fastest drivers, took place in two groups immediately after free practice.

“I think all of the teams suffered very much under the conditions on this difficult race track that was new for everyone,” said Team Principal Allan McNish. “Qualifying was like a gamble and nobody was able to prepare perfectly. In the end, we have to settle for Daniel (Abt) and Lucas (di Grassi) still having finished in the points but, obviously, the result is not what we expected or capable of. We’re taking plenty of homework with us to Neuburg and clearly want to improve for the next race in Marrakesh.”

On the wet race track in qualifying, both drivers from Audi Sport ABT Schaeffler complained about insufficient grip on the rear axle. In addition, Lucas di Grassi – like several other drivers – retroactively had his fastest qualifying lap cancelled due to a short-term power peak.”

In the race, both Audi drivers showed a fighting spirit. “But we were simply not fast enough today,” said Daniel Abt, “so we had to fight hard for our positions. It was a tough race for us.” The second race of the new Formula E season will be held in Morocco on January 12, 2019.