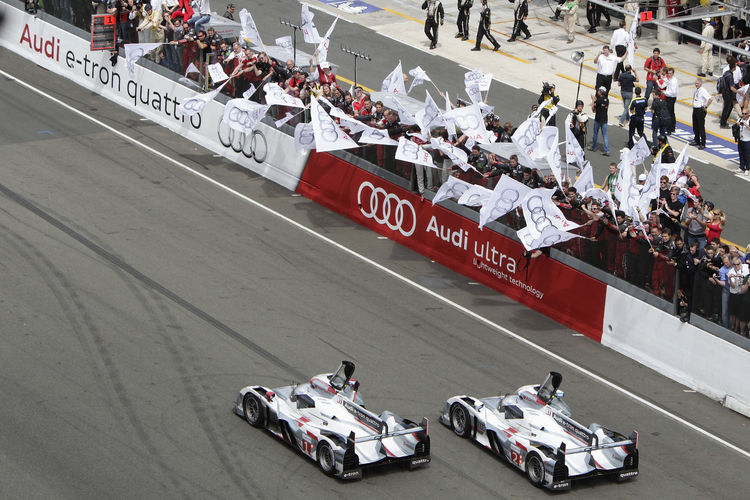 The new Audi R18 e-tron quattro competes in the 24 Hours of Le Mans in three weeks. The regulations stipulate that the sports car must be even more economical. At the same time, it will achieve significantly better lap times. With this efficiency gain, Audi makes the next step in the development of hybrid technology. In 2012, Audi was the first manufacturer to win Le Mans with hybrid drive. And to this day, this technology of the brand with the four rings is unbeaten in the endurance classic.

An electric drive generating more than 270 hp and the faultless and secure continuous operation of a high-voltage system producing more than 600 volts in racing action: what is considered as a matter of course today in the Audi R18 e-tron quattro contesting the FIA World Endurance Championship WEC was a huge challenge at the beginning of the project.

“The Audi R18 e-tron quattro was without doubt the most complex racing car up to that time in the 32-year history of Audi Sport,” says Head of Audi Motorsport Dr. Wolfgang Ullrich. The Audi motorsport department had never developed a sports car with two driven axles, never a model with an electric drive motor and a combustion engine. On top of this came the extremely sophisticated electronic networking of the systems. And ultimately, as a result of this additional drive extreme demands were made of lightweight design to achieve the limit of 900 kilograms.

A look in glossy white with silver, black and red as contrasting colors, as well as graphical references to the design of printed circuit boards on the exterior bodywork surfaces of the LMP race car symbolized the new drivetrain technology in 2012. An exciting battle between the two hybrid sports cars with the four rings dominated the race until the closing stages. At the flag, Marcel Fässler, André Lotterer and Benoît Tréluyer beat their team-mates Dindo Capello, Tom Kristensen and Allan McNish by a lap. “The technical challenge was just as thrilling as the race itself,” says Dr. Ullrich. “Such complex systems never run trouble-free from the word go. So it was very pleasant to see Audi Sport and Audi Sport Team Joest bringing the two race cars home in the best positions.” Two Audi R18 ultra equipped with conventional TDI drive rounded off the result with third and fifth positions.

“It is in fact only three years ago that Audi accomplished this,” says Dr. Ullrich, “however, even today many components have nothing whatsoever to do with the technology used at that time.” The Motor Generator Unit (MGU), which recuperates energy on the front axle before feeding it back again, has a fundamentally different design to that seen three years ago. It produces 33 per cent more than the first unit. The hybrid system’s accumulator accepts 40 per cent more energy today than three years ago. In spite of this greater performance, today’s race cars weigh 30 kilograms less than the first generation. “We also aim to defend this ‘Vorsprung durch Technik’ again this year against tough opponents,” says Dr. Ullrich.