Flashback: Le Mans 2011 and the victory of the lone fighters

Links
{{ activeItem() }}
Twitter
08/05/20
Qualifying begins at 14:15 CEST. @LucasdiGrassi will run in Group 1, @ReneRastRacing in Group 4. Ways to watch &gt;&gt;… https://t.co/qlibgAiaxV
08/05/20
Click for an overview of the broadcast times of the first double-header here in Berlin. More info &gt;&gt;… https://t.co/2dfNVzjQba
08/05/20
“There are a lot of things that have changed for these nine days here in Berlin.” – @allanmcnish. Let’s join him fo… https://t.co/gNSHvkRRHB
08/05/20
Our results in the second free practice session in Berlin. Qualifying will begin at 14:15 CEST. &gt;&gt;… https://t.co/2thLfqPh0E
Audi Sport on Twitter
{{ activeItem() }}
Facebook
08/03/20
What a start to the DTM season it was for Nico Mueller! Race victory and he is currently leading the drivers’ standings. See how he experienced the weekend in his latest #DriversDiary. >> audi.com/DTM #PerformanceIsAnAttitude #ThanksToDTM
08/03/20
Fourth victory for the Audi R8 LMS in just two weeks, adding to podiums and victories for the Audi R8 LMS GT4 and Audi RS 3 LMS this past weekend. 🇩🇪 🇮🇹 🇺🇸 🇫🇷 >> audi.com/GT3 >> audi.com/GT4 >> audi.com/TCR #PerformanceIsAnAttitude
08/02/20
Another podium lockout for us today! Check out how the second race at Circuit de Spa-Francorchamps has unfolded. >> audi.com/DTM #PerformanceIsAnAttitude #ThanksToDTM
08/02/20
Leading the pack. >> audi.com/DTM #PerformanceIsAnAttitude #ThanksToDTM
Audi Sport on Facebook 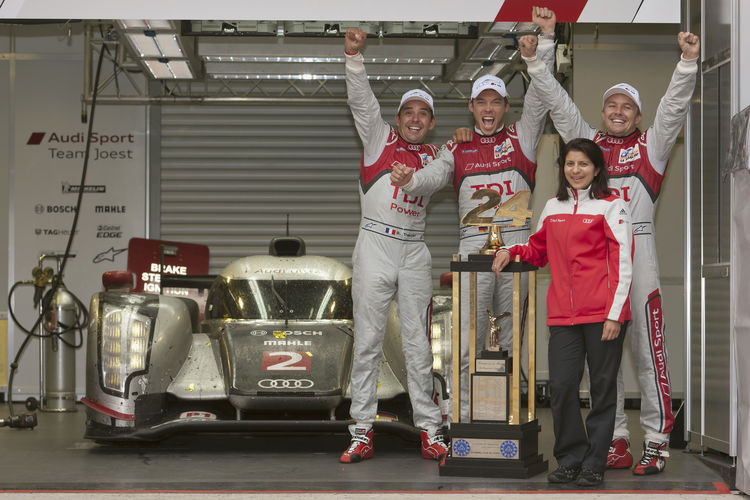 Marcel Fässler, André Lotterer and Benoît Tréluyer will be traveling to the Le Mans 24 Hours as the current leaders of the standings in the FIA World Endurance Championship (WEC). When the trio starts at Le Mans in three weeks from now, it will be battling for its fourth victory in the iconic endurance race. Together with Audi Sport Team Joest and its race engineer, Leena Gade, it forms a close-knit team that achieved its first victory at Le Mans in a dramatic race four years ago.

Audi was on the grid at Le Mans in 2011 with three race cars. The Audi R18 TDI was a completely new development and marked a radical change. Instead of an open-wheel sports car, Audi now relied on a closed version with more favorable aerodynamics and, for the first time, on a V6 TDI engine.

Just one hour into the race a GT race car hit the left rear wheel of the leading Audi, car number ‘3,’ driven by Allan McNish. As a result, the Audi hit a track barrier and rolled over. McNish sustained no injuries in the incident, but his car was beyond repair. As a result, two Audi cars remained in the race. Saturday night the next setback followed. Just before 23.00, another GT race car touched the number ’1’ Audi R18 TDI driven by Mike Rockenfeller. At 270 km/h, the winner from the previous year crashed into the guard rails and was hospitalized for a night as a precaution. On Sunday morning, he was released again – not least thanks to the high safety standards of Audi’s single-piece carbon fiber monocoque featuring sophisticated manufacturing technology. In contrast, the damage to the race car was too heavy for it to be able to continue the race.

That meant all expectations of Audi Sport Team Joest were now pinned on car number ‘2’ driven by Marcel Fässler, André Lotterer and Benoît Tréluyer, who were contesting their second Le Mans race for Audi. Following the retirement of their team-mates, the Swiss-German-French trio had to defend itself against the attacks by four Peugeot race cars.

A thrilling battle ensued in which Audi kept setting strong lap times. On lap 229, André Lotterer even beat the best time from qualifying. Audi pulled clear of its rivals some of the time but the French race cars caught up with the R18 TDI again. “The battle that developed with Peugeot was incredibly intense,” says Lotterer. “The lead between us kept changing.” What’s more, the leading Audi suffered a slow puncture in the last hour of the race. As a result, André Lotterer had to pit earlier than planned and refuel earlier as well. From then on, he was forced to save fuel to prevent having to refuel again at the end of the race while keeping his immediate rivals at bay. “As drivers we’ve been learning to cope with this type of pressure from the beginning of our careers,” Lotterer says. “So, we mastered this situation as well. In the cockpit, you simply have no chance to spend a lot of time thinking about what might happen.”

In the end, the German crossed the finish line after 24 hours ahead of the fastest of the four Peugeot with an incredibly narrow advantage of 13.854 seconds. The most efficient combination of a closed sports car and a V6 TDI engine had paid off in its debut race. For Marcel Fässler, André Lotterer and Benoît Tréluyer – as well as for their race engineer Leena Gade – it marked the first of three Le Mans victories to date.