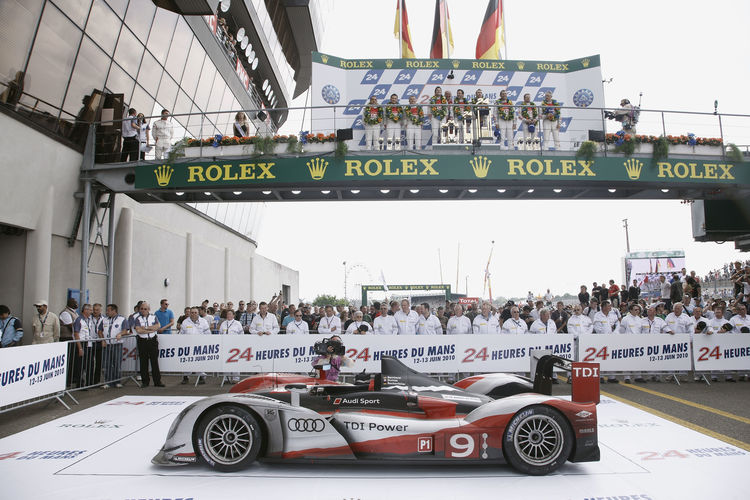 The classic trade-off in endurance racing – increasing performance while ensuring maximum reliability – led to a dramatic course of events in the 78th running of the Le Mans 24 Hours. A look at Audi’s rivals showed how difficult it was to resolve this conflict: they had to cope with one retirement after another. In contrast, Audi made the reliability of the V10 TDI engine their top priority in order to be on the safe side with no “ifs” or “buts”. “That’s why, even before the race, we knew that we wouldn’t have the fastest car but an extremely reliable and efficient one. Our development goal had been to increase efficiency in the neighborhood of 20 percent – and we managed to do that,” says Head of Audi Motorsport Dr. Wolfgang Ullrich.

This requirement that had been specified for the engineers produced a two-fold effect – a technical one with a 100-percent success rate in positions one, two and three and a sporting one with the new distance record that was set. In trying to be faster than Audi, their main rivals, Peugeot, had to cope with the total loss of all three of their race cars due to technical reasons. Afterwards, the Audi drivers by no means reached the finish without pressure, but drove so fast that they broke an old best mark. Across the 397 laps, the fastest Audi R15 TDI covered a distance of 5,410 kilometers. The previous best mark of 5,335 kilometers dated back to 1971. At that time, the circuit even had a different configuration, as the long Hunaudières straight had not been interrupted by chicanes yet and the race cars were able to run a lot faster there than in 2010.”

“This record run was simply incredible,” Mike Rockenfeller recalls. “I clearly felt how much of a load had come off my shoulders after our victory.” While the (then) 26-year-old German was familiar with the Le Mans 24 Hours and had contested numerous races together with Timo Bernhard and Romain Dumas before, the trio was racing for Audi at Le Mans in this combination for the first time. “This was a driver line-up on the same wavelength. We knew what was possible on track and our Audi was running perfectly as well. It simply felt awesome.”

Following the retirements of Audi’s opponents, the team-mates of the three youngsters were their fiercest rivals. An incident that was not the squad’s fault added another element of suspense to the situation. In the pit lane, car number ‘9’ with Romain Dumas at the wheel lost an outside mirror following contact when the car turned into its pit position. This component, however, is required by the regulations. “If this had meant an additional stop for us, our race would have been lost,” says Rockenfeller. “But the mechanics replaced the mirror very quickly during a scheduled stop.” As a result, Bernhard, Dumas and Rockenfeller saw the checkered flag with a one-lap advantage ahead of Marcel Fässler/André Lotterer/Benoît Tréluyer. Dindo Capello/Tom Kristensen/Allan McNish completed the brand’s one-two-three result. Audi has not been beaten at Le Mans since this success – and the new distance record has been unbroken to date.