Flashback: Le Mans 2008 and the unforgettable battle in rain 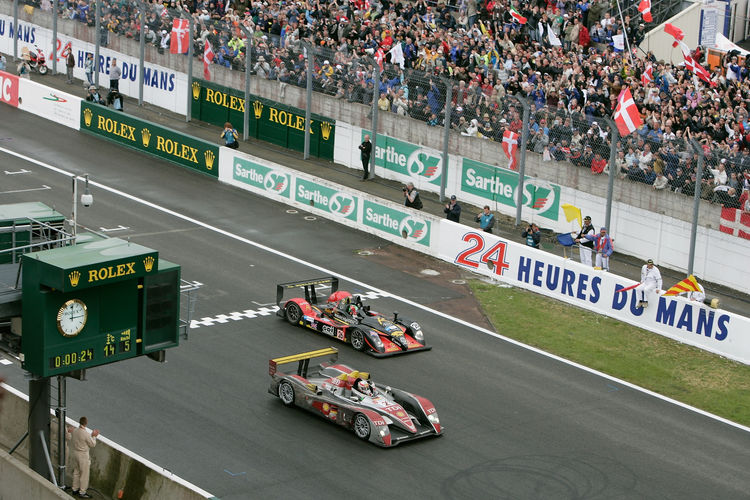 The 2008 Le Mans 24 Hours ranks as one of the top spots on the list of motorsport history’s epic events. A gripping battle between Audi and Peugeot marked the race from lights to flag, with Dindo Capello/Tom Kristensen/Allan McNish in the Audi R10 TDI displaying their driving experience on track and benefiting from the tactical skills of the crew in the command post.

Qualifying at Le Mans provided some indication of the relative strengths. Three Peugeot cars qualified for the top spots on the grid and the fastest Audi was in position four. Allan McNish remembers: “The 2008 season was unique. We won the Le Mans 24 Hours, the ‘Petit Le Mans’ in the United States, the European Le Mans Series, plus the American Le Mans Series, although we weren’t dominant in any of these races when it came to lap times.”

In 2006, Audi had successfully pioneered diesel power, scoring the first-ever victory at Le Mans with a compression-ignition engine. Peugeot followed suit and competed with a diesel power-plant in 2007 as well. “Peugeot were strong, so we had to pull out all the stops,” McNish recalls. “We pushed Peugeot to the limits, hoping to drive our challengers into making a mistake. We knew we couldn’t keep pace strictly in terms of lap times.” As a matter of fact, Audi was not just lacking a few tenths but full seconds. “That’s why we went to the absolute limits with our strategy of managing our fuel consumption and use of the tires. The likelihood of rain suited us well. In tests we’d seen that Peugeot were struggling on a wet track. Our car was more agile and the set-up was easier to adjust to the weather conditions.”

With the benefit of this knowledge, Audi was able to use clever tactics and kept pace with Peugeot. Eight hours into the race, Capello/Kristensen/McNish improved from third to second place. When heavy rain set in, the #2 Audi R10 TDI overtook the #7 Peugeot. After 15 hours, the Audi drivers had gained a one-minute advantage that increased to three after 18 hours and amounted to a whole lap after 19. But then the track dried off again and Peugeot recovered the lap.

“In 2008, the changeable weather played into our hands. We had achieved an advantage on a wet track and were able to defend it,” the Scotsman recalls. “When the track dried off again the computer simulations showed how tight the battle would ultimately become. Tom Kristensen took the car over from me and drove the final stint.” But the race wasn’t over yet because rain set in again in the last half hour.”

In the final sprint, engineer Howden Haynes made a tire decision that was right on the mark. “Our decision forced Peugeot to react with a tactical decision as well. They promptly made the wrong choice and we benefitted and prevailed. It was one of our most hard-fought victories,” McNish says. He regards this success as one of the highlights in his career. Ten years earlier, he had celebrated his first victory at Le Mans. “I was proud and felt like a load had come off my chest because I’d been returning to Le Mans every year following my success in 1998 but hadn’t been able to win again until 2008. That made my first triumph with Audi even sweeter. Even today, the powerful Audi R10 TDI continues to be my personal favorite among all the Audi sports prototypes I’ve ever raced in.”