Flashback: Le Mans 2007 and the victory of the only remaining Audi

Links
{{ activeItem() }}
Twitter
08/13/20
Third place on the grid for @ReneRastRacing ahead of the final race of season 6. Well done, René! &gt;&gt;… https://t.co/evuVIbQAUO
08/13/20
For the second day in a row, @ReneRastRacing is through to super pole, which will begin at 15:00 CEST. Live stream… https://t.co/iXFxTfC7F4
08/13/20
Qualifying begins at 14:15 CEST. @LucasdiGrassi will run in Group 2, @ReneRastRacing in Group 3. Live stream &gt;&gt;… https://t.co/n34OBLnRPa
08/13/20
Team WRT will run a 3rd Audi R8 LMS with drivers @benjigoethe and Stuart Hall as a guest entry in the ADAC… https://t.co/zlpdmEB3Tr
Audi Sport on Twitter
{{ activeItem() }}
Facebook
08/11/20
Victories for the Audi R8 LMS in the GT World Challenge Europe at the Misano World Circuit highlighted a weekend with wins and podiums around the world. Well done to our customers. 🇮🇹 🇩🇪 🇨🇳 🇷🇺 🇧🇪 🇿🇦 🇸🇪 🇺🇸 >> audi.com/GT3 >> audi.com/GT4 >> audi.com/TCR #PerformanceIsAnAttitude
08/10/20
Before heading to Lausitzring this weekend, let’s have a quick look back on the DTM safety measurements at the track in Nico Mueller’s latest #DriversDiary. >> audi.com/DTM #PerformanceIsAnAttitude #ThanksToDTM
08/10/20
We will be back racing at the Lausitzring for the next two weekends. Let’s have a look back on our history at the circuit. >> audi.com/DTM #PerformanceIsAnAttitude #ThanksToDTM
08/03/20
What a start to the DTM season it was for Nico Mueller! Race victory and he is currently leading the drivers’ standings. See how he experienced the weekend in his latest #DriversDiary. >> audi.com/DTM #PerformanceIsAnAttitude #ThanksToDTM
Audi Sport on Facebook 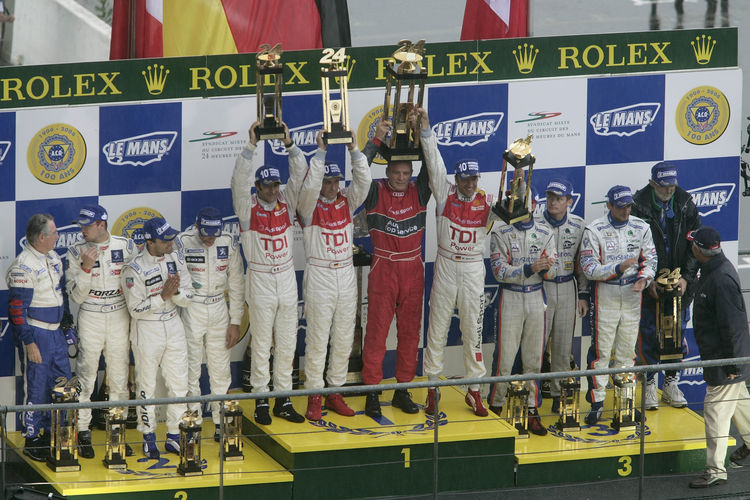 After Audi had gone down in history in clinching the first diesel-powered victory at Le Mans in 2006, the race the following year held the next major challenge in store for the brand. The 75th running of the epic event showed one of its particularly grueling facets.

As the winner of the previous year, Audi was a clear favorite in 2007 although, in Peugeot, a strong rival that was also relying on diesel power challenged the brand. This was exactly the type of competition Audi had been looking for. However, changeable weather made for very slippery track conditions during parts of the race. Audi’s up-and-coming driver Mike Rockenfeller (D), who slid backwards into the guard rails on his third lap, was one of the first ‘victims.’ The car was so heavily damaged in the incident that he was forced to retire. The next setback followed early Sunday morning when a rear wheel came off the Audi R10 TDI of Dindo Capello (I) and his team-mates Tom Kristensen (DK) and Allan McNish (GB), who had been leading the race for 16 hours. This meant that all hopes were now pinned on car number ‘1.’

Like the year before, Frank Biela (D), Emanuele Pirro (I) and Marco Werner (D) were sharing driving duties of this R10 TDI. Heavy rain in the final stage of the race demanded maximum concentration of the drivers. In the crucial hours, Marco Werner was sitting in the cockpit of the LMP race car that was still open at the time. “Towards the end, this was no longer a car race but a boat race,” the driver from Dortmund, Germany, recalls with a smile. “And all the pressure was now on us because we were the last of the ‘Audi warrior’ in the field.” Peugeot were in second place, chasing the #1 Audi, and their position would have proved dangerous if Audi had made a mistake.

Emanuele Pirro wanted to drive the final stint to the finish, as he had ‘traditionally’ done, but race engineer Ed Turner stuck to his decision of keeping Marco Werner at the wheel. “I knew where the dangerously wet track sections were, “says the race driver. “I was really relieved to see the checkered flag. The final laps were chaotic,” Werner recalled, after having driven the only remaining Audi across the finish line in first place. For him, as well as for his two team-mates, this marked the final victory at Le Mans before their careers ended. Werner had won the iconic race for the third time in succession that year. Biela and Pirro were successful for the fifth time, clinching a deserved, honest and unforgettable triumph that Audi Sport Team Joest had worked incredibly hard for.