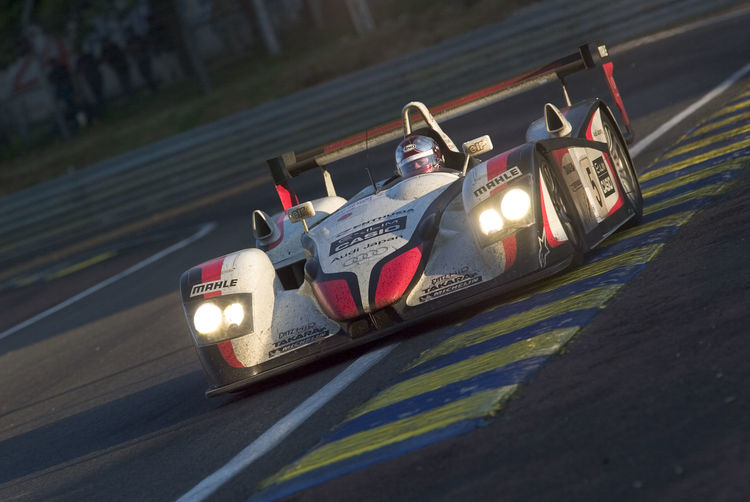 After Audi had won the Le Mans 24 Hours three times in succession between 2000 and 2002, the brand with the four rings left the field to its customers for the time being.

The success of Audi Sport Japan Team Goh in 2004 showed the talent of the team and its drivers and it proved the enduring qualities of the LMP race car, the Audi R8, as the car which the constructors had designed in 1999 went on to clinch one victory after another each year from 2000. Due to the fast rate of development in modern day motor racing, success with one and the same model for many years was very unusual.

The dominance of the sports car could not even be broken by the change in the regulations for the 2004 season. New new rules called for a slimmer rear wing, which reduced downforce. Audi countered with a new aerodynamics variant and compensated for part of the loss – the Audi R8 was even faster than in 2002. Allan McNish and Johnny Herbert from Audi Sport UK Team Veloqx achieved better lap times in the pre-test than Tom Kristensen had on setting his best time in the previous year’s qualifying session. In qualifying, Herbert was faster than the pole sitter had been the year before as well.

In the race, a thrilling battle ensued between Audi Sport UK Team Veloqx and Audi Sport Japan Team Goh with Seiji Ara/Dindo Capello/Tom Kristensen. When the British squad had to change a suspension component the Japanese-Italian-Danish trio took the lead and defended all attacks by the Veloqx squad through to the finish. After 24 hours, the conceptual superiority of the Audi R8 could be measured in numbers: The winners reeled off 5,169.9 kilometers. Never before had an Audi R8 covered such a long distance at Le Mans.

Team boss Kazumichi Goh was happy about this first success of his team. It marked Tom Kristensen’s fifth consecutive victory and sixth triumph in total at La Sarthe. Team Audi Sport UK Team Veloqx, as the runners-up, and ADT Champion Racing in third place completed the one-two-three success of the Audi customer teams. Seiji Ara was particularly proud: “I’m overjoyed to have won here. The pressure I was under was even very high before the race because in Tom and Dindo I had two successful team-mates.” The 30-year-old Asian was only the second Japanese to have ever won the iconic endurance race in France.