​Flashback: Le Mans 2002 and the hat-trick for Audi 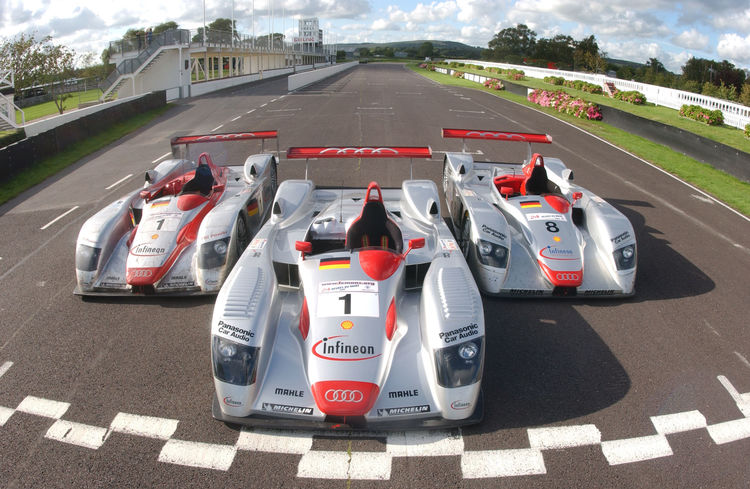 Audi managed a hat-trick at Le Mans in 2002. Never before had the same driver team triumphed at La Sarthe three times in succession. Frank Biela/Emanuele Pirro/Tom Kristensen were the first to achieve this feat.

The Audi drivers had previously come to appreciate the advantages that TFSI gasoline direct injection provided to this success when the technology debuted in the 2001 season. The responsiveness of the Audi R8 was notably better. But this progress was not yet manifested in lap times, as heavy rain made for unusual conditions back then.

Consequently, the whole team was particularly excited in 2002. How would the capabilities of the TFSI engine pan out on a dry track at Le Mans? Dindo Capello in his Audi R8 immediately showed the car’s potential in qualifying. He needed only 3m 29.905s for one lap. With that, the Italian beat the previous best mark set in 1999 although the track had an additional section of turns as a result of a conversion project.

In the race, the Audi ran faster than ever before. The victorious R8 covered 5,118.7 kilometers – seven laps or 110.7 kilometers more than in the first success achieved in 2000. “This was strong proof of ‘Vorsprung durch Technik,’” Head of Audi Motorsport Dr. Wolfgang Ullrich recalls. “After the wet race, the audience had been able to see the actual progress made with a one-year delay as well. Low fuel consumption and longer range are tangible advantages that our customers who can buy this engine technology in production automobiles have since been benefiting from as well.”

Another technical detail proved equally valuable. The 70th running of the endurance race in 2002 was marked by an unusually large number of punctures, which also affected the Audi drivers. That these incidents did not produce any serious consequences was, among other things, the result of a system that Audi had jointly developed with Michelin. It warned the driver of inflation pressure loss – the system has since become an additional safety feature in road traffic as well. Today, the system is even required by law for new cars.

While Audi celebrated the third success of Biela/Pirro/Kristensen the organizer, Automobile Club de l’Ouest (ACO), was faced with a completely new situation. Although the Le Mans winner’s trophy is designed to be a challenge cup the regulations state that a team may permanently keep the trophy after its third consecutive triumph. As a result, the coveted prize remained in Ingolstadt for the first time and the ACO had to produce a new challenge cup.