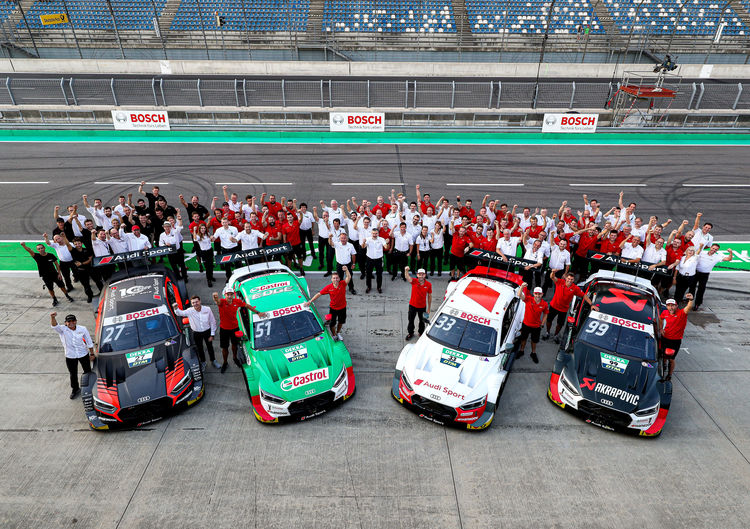 To the DTM title with TFSI power at an accelerated pace: Audi secured an early win of the manufacturers’ championship in the popular touring car racing series at the Lausitzring and is thus the first champion in the new turbo era. Four races before the end of the season, the brand with the Four Rings sits in the top spot out of reach of its rivals.

Following the one-two-three success on Saturday, Audi, in the 500th DTM race on Sunday, even achieved a fivefold triumph. At the same time, all eight Audi RS 5 DTM cars finished in the top nine spots. As a result, the brand with the Four Rings, for the second time this season, scored the maximum possible number of points in the manufacturers’ championship. In addition, Audi is the first manufacturer to have managed the feat of deciding both races of a weekend in its favor in the new turbo era.

“Audi has now won three of the last four manufacturers’ titles in the DTM,” said Head of Audi Motorsport Dieter Gass. “That’s a strong performance and shows the high level our entire squad has been working on for years. This includes our drivers, our teams, our partners and every individual involved in the DTM project. Clinching the manufacturers’ title so early and with such a big advantage shows that we’ve simply been delivering a mega season so far. I think that even four races before the end of the season, it’s fair for us to say that our Audi RS 5 DTM has been the car to beat this year and that we’ve also built an extremely strong and efficient engine. The fact that this engine concept can be found in a very large number of Audi production models worldwide, too makes this title win all the more valuable. The manufacturers’ title also belongs to all employees at Audi who work for our brand day in day out with heart and soul.”

The title race in the drivers’ and teams’ championships remains open. Following his retirement on Saturday, DTM leader René Rast from Audi Sport Team Rosberg on Sunday celebrated victory in commanding style from fourth on the grid. “Winning the 500th race in DTM history is very special,” said Rast. “A big thank you from me goes to the guys in the pit lane who worked up until the early morning hours and gave me a perfect car again. It’s also great that Audi, with an extremely strong result, has won the manufacturers’ championship early – we have the strongest package this year.”

With his fifth victory this season, Rast extended his advantage over the runner-up, Nico Müller from Audi Sport Team Abt Sportsline, to 20 points. The Swiss was faster than Rast in qualifying, but dropped to tenth position at the start. “We already had a small problem with the clutch yesterday,” said Müller. “I’m happy to have fought back to second with an aggressive strategy and an early pit stop, and to have gotten off lightly.”

Like the day before, Mike Rockenfeller from Audi Sport Team Phoenix took third position. As a result, drivers from all three Audi factory teams stood on the podium on Sunday. “When you start from tenth on the grid, you can only be happy about third place,” said “Rocky.”

Jamie Green, in fourth position, just barely missed the podium. In qualifying, the Briton had secured his first pole position in nearly two years. Robin Frijns, following a hard-fought race, finished fifth. Loïc Duval, after a slow pit stop, still fought back to eighth position and thus into the points, too.

A strong performance was once again shown by the customer team WRT Team Audi Sport: Jonathan Aberdein, for the third time this year, started from the front row and in seventh position in the race scored points just like his teammate, Pietro Fittipaldi, in ninth.

In the teams’ classification, Audi Sport Team Abt Sportsline has maintained its narrow advantage over Audi Sport Team Rosberg. Before its home round at the Nürburgring on September 14/15, Audi Sport Team Phoenix is only separated from third place in the standings by seven points.