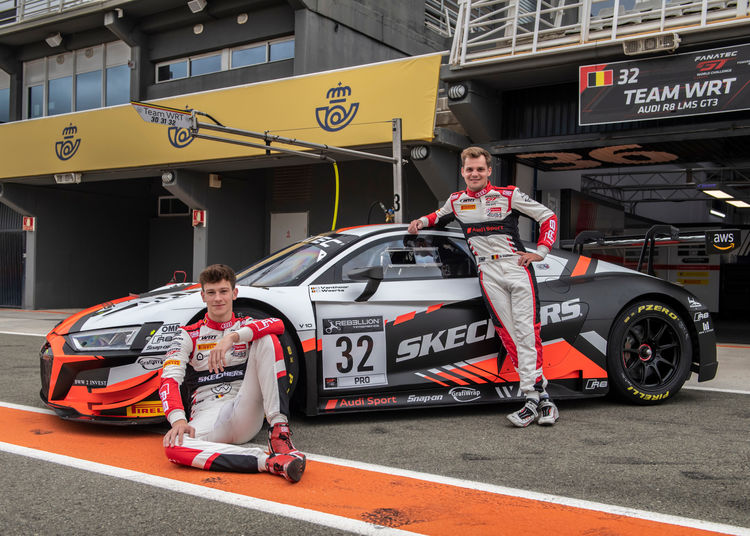 Audi Sport customer racing congratulates Team WRT on five title successes at the end of an exceptional season in the Fanatec GT World Challenge Europe powered by AWS. Vincent Vosse’s Belgian squad, with the Audi R8 LMS, won the drivers’ and the teams’ classifications in the overall series and in the Sprint cup, as well as the Endurance Cup teams’ classification. Charles Weerts and Dries Vanthoor prevailed against tough competition: up to 30 race cars in the Sprint Cup and up to 58 in the Endurance Cup from nine manufacturers in one of the most competitive series worldwide. In total, the Audi R8 LMS has thus already won 203 championships in overall drivers’ classifications and other classes since 2009.

Dries Vanthoor and his Belgian compatriot Charles Weerts competed with Team WRT in the Fanatec GT World Challenge Europe as the reigning Sprint Cup champions. Speed, reliability and excellent teamwork characterized the season for the two Audi Sport drivers and their team.

Weerts and Vanthoor won at the season opener at Magny-Cours. They continued this form by taking three more victories and a total of seven podium finishes over the course of the ten individual sprint races. After a victory and a second place at Brands Hatch, the two Audi Sport drivers even won the drivers’ title one event before the finale. As a result, they became the first driver pairing ever to successfully defend their Sprint Cup title in the following year. Audi has now decided this classification in its favor for the fourth time. The Sprint Cup teams’ title was also clinched by Team WRT before the final round of the season – the outfit’s seventh in this series since 2014. WRT drivers Frank Bird and Ryuichiro Tomita contributed another valuable result with second place in the Silver category of the Sprint Cup standings. Their performance helped the team to second place in the Silver Cup teams’ classification.

The Belgian Audi customer team was not only among the best in the sprint races. The team also clinched another title in the Endurance Cup. The best individual results were three podium places. In Le Castellet, Weerts and Vanthoor managed a strong second place together with Kelvin van der Linde. At the Spa 24 Hours, the team celebrated second place in the final standings after a spectacular recovery from 54th place on the grid, followed by third place at the finale in Barcelona. Thus, Weerts and Vanthoor ended the Endurance Cup season in third place after five races, while Team WRT won the teams’ classification and finished second in the Silver category.

In the GT World Challenge, Sprint and Endurance are traditionally combined to produce an overall classification. During the first weekend of September at the Nürburgring, sixth place was enough for Charles Weerts and Dries Vanthoor, this time on the grid together with Robin Frijns, to win the overall drivers’ classification early. It was the reward for the driver pairing’s strong performances this season, together with their alternating teammates Frijns and Kelvin van der Linde. In addition, the teams’ title in the combined Sprint Cup and Endurance Cup classification went to Team WRT for the fourth time since 2014. In total, Vincent Vosse’s squad clinched five titles in the 2021 season. The mechanics, who won the 2021 Pirelli Pit Stop Challenge, played a major role in this.

Audi Sport customers Saintéloc Racing and Attempto Racing, which have also been Audi Sport customers for many years, each permanently fielded two additional Audi R8 LMS cars. The highlight for Sébastien Chetail’s French Saintéloc team was second place at the sprint finale at Valencia. At Barcelona, the squad also fielded the not-yet-homologated Audi R8 LMS GT3 evo II, the latest evolution of the GT3 sports car, for Audi Sport customer racing at the season finale. The Attempto Racing team of Arkin Aka from Hanover recorded six top ten results in the sprint and endurance races and finished the endurance season as the fourth-best team in the Silver category. Alex Aka finished third in the Silver category of the Endurance Cup drivers’ standings.

GT World Challenge Europe also made history in the world of motorsport in 2021: for the first time, a sim racing series contributed points to a real-world championship. The five rounds of the Fanatec Esports GT Pro Series, in which real racing drivers competed against each other during the race weekends, added to the teams’ standings of the Endurance Cup and thus into the overall standings. In the debut season of this classification, Kelvin van der Linde and Ryuichiro Tomita each scored an overall victory for Team WRT in the races in the simulators, contributing valuable points to the final real-world result. Team WRT finished the season in third place in the Pro and Silver classifications of the sim racing series.