Skip to content
We are using cookies for a better user experience.
10/26/20
Neuburg a. d. Donau
Sport

First victory of the Audi R8 LMS in Super GT 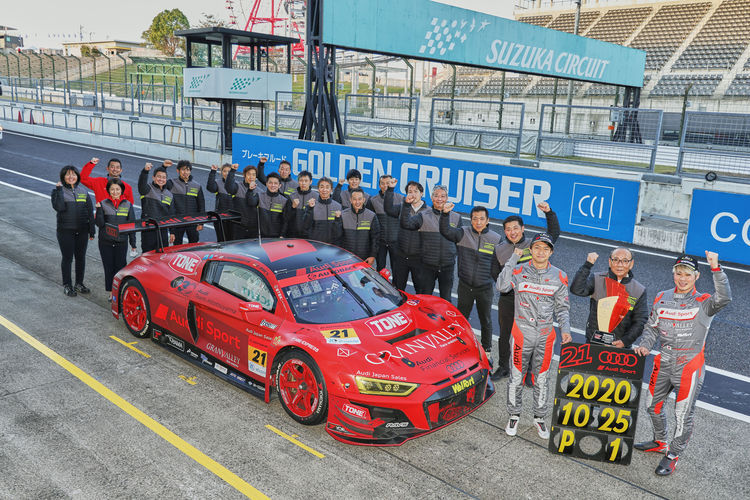 In one of the world’s toughest GT3 racing series, Audi Team Hitotsuyama achieved its first victory this year in Japan with the Audi R8 LMS. At the same time, a customer team in Eastern Europe celebrated several title wins with the first generation of Audi’s GT3 sports car.

First victory of the season in Japan: The GT300 class of the Super GT racing series is one of the toughest national GT3 racing series worldwide. In the competition of the 29 race cars from twelve brands on tires from four different manufacturers, the Audi R8 LMS has prevailed for the first time this season. Audi Team Hitotsuyama won the sixth race of the season on the demanding Suzuka circuit. Starting driver Tsubasa Kondo started the race from sixth place and handed over the Audi R8 LMS to Shintaro Kawabata during the driver change. The team’s refuelling strategy worked out: After 49 race laps, the Japanese crossed the finish line with a 2.6 second advantage and a minimal remaining fuel supply. This means that the Audi R8 LMS has already recorded 42 victories in 119 races worldwide this season.

Title success in Eastern Europe: After 2018 and 2019, the title in the Eset V4 Cup Endurance went to an Audi customer team for the third time in a row. Daniel Skalický won the endurance classification of the Eastern European racing series in an Audi R8 LMS ultra. At the finale at the Hungaroring, third place in his class was enough for the Czech from the Duck Racing team to win the title. After one win, two third places and a fourth place this season, the privateer has now secured a 19-point lead in the standings over the BMW driver duo Gregor Zsigo/Štefan Rosina. At the same event, Skalický also took third place in a sprint race and thus also won the sprint title in the Eset V4 Cup.

Second place in New Zealand: Team IMS ended the North Island Endurance Series season with second place at the finale. At the Pukekohe circuit, Andrew Fawcett/Sam Fillmore led the field at times in the Audi R8 LMS and after three hours of racing, achieved a second consecutive podium result. In September, the two New Zealanders had already achieved second place at the Hampton Downs circuit.

High level of attention: Audi China included the Audi R8 LMS GT2 in a market launch of RS and S models, which was also accompanied by the actress Dilireba, who is well-known in China. 30 million viewers followed the presentation in the social media, generating 200 million impressions. The Audi R8 LMS GT2 is currently on tour in China. Future customers had the chance to test the racing car for the first time in Shanghai with the Absolute Racing team. In the last week of October, Team TSRT will take the opportunity to show customers the most powerful racing car from the Audi Sport customer racing model range in Zhuhai.

Long distance victory in Magny-Cours: Team Milan Compétition celebrated a class win at the fifth round of the Trophée Tourisme Endurance at Magny-Cours after four hours of racing. In the mixed sports and touring car series, Pierre Arraou and Denis Gibaud in the Audi R8 LMS GT4 won the T5 group by 30 seconds.

Leading the standings for the finale: Team Comtoyou Racing maintained its leading position in two out of three rankings at the home game in TCR Europe. After the two races at Spa, Jean-Michel Baert’s team, which enters three Audi RS 3 LMS cars, leads the team standings before the finale in Jarama with a 94-point advantage. In the Yokohama Trophy, Nicolas Baert is seven points ahead of his teammate Sami Taoufik. In the overall championship standings, Audi driver Mehdi Bennani is second out of 29 drivers, 26 points behind the championship leader.

Trophy in Hungary: In the final round of the Eset V4 Cup, Audi customer team Horňák Aditis achieved a podium finish in its class. In the one-hour race at the Hungaroring, Radim Adámek and Miro Horňák in their Audi RS 3 LMS finished third.

Second place in Oschersleben: Max Frederik Gruhn achieved another podium result in German club racing with his Audi RS 3 LMS. After the junior had been on the podium several times as a regular participant in the Spezial Tourenwagen Trophy, he started in the third round of the Northern German ADAC Börde Touring Car Cup. After two hours of racing, he took second place in his class.