Skip to content
We are using cookies for a better user experience.
07/01/19
Neuburg a. d. Donau
Sport 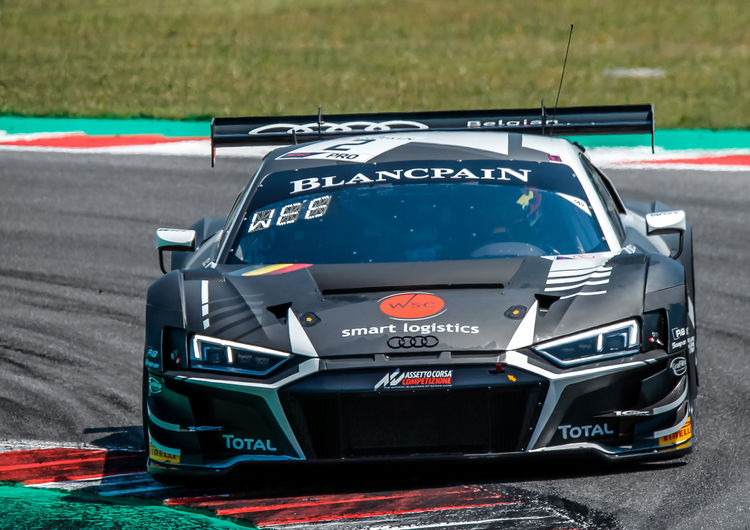 First victory this season: Belgian Audi Club Team WRT scored its first victory this season in round two of the Blancpain GT World Challenge Europe at Misano (Italy). In an Audi R8 LMS, Belgian Audi Sport driver Dries Vanthoor and his compatriot Charles Weerts won in extremely hot weather conditions. Thus, 18-year-old Weerts is the youngest winner in the history of the Blancpain GT Series. Belgian Audi Club Team WRT, while running in second position, had made perfect use of a safety car period for the driver change from Vanthoor to Weerts and captured the lead. Weerts held up to the pressure from his immediate rivals and safely brought home an advantage of nearly three seconds. For Dries Vanthoor, following his victory with Audi Sport Team Phoenix in the 24-hour race at the Nürburgring, this marked the second triumph within the space of one week. In third position, Audi Sport drivers Christopher Haase (Germany) and Simon Gachet (France) from French Team Saintéloc Racing finished on the podium at Misano too.

Continuing to be unbeaten: Parker Thompson at Shannonville Motorsport Park also dominated the third race weekend of the Canadian Touring Car Championship. In an Audi R8 LMS GT4 from Speedstar Motorsport, the Canadian won both races of the weekend. As a result, Thompson, who was previously unbeatable at Mosport and Calabogie, has won all six races of the season to date.

Third podium in succession: With third position in round four of the IMSA Michelin Pilot Challenge at Watkins Glen (USA), Carbahn Motorsport, following victory at Sebring and third place at Mid-Ohio, secured its third podium finish. Jeff Westphal and Tyler McQuarrie in an Audi R8 LMS GT4 had entered the race from the fourth spot on the grid and, finishing in third, trailed the winners by merely five seconds after the four-hour distance. With a four-point deficit, Westphal/McQuarrie are the runners-up in the current drivers’ standings.

Victory and podium finishes in Canada: Team TRC/M1GT Racing with Matthew Taskinen celebrated a TCR class win in the Canadian Touring Car Championship at Shannonville Motorsport Park. In an Audi RS 3 LMS, Taskinen won the opening race of the weekend while his teammate, Jean-Francois Hevey, came third. In the second race, Taskinen, in position two, scored another podium finish.

Third place in the United States: Gavin Ernstone and Jon Morley managed the leap onto the podium in the race of the IMSA Michelin Pilot Challenge at Watkins Glen (USA). After four hours, the duo from Roadshagger Racing by eEuroparts.com in an Audi RS 3 LMS secured third place. For Ernstone/Morley, this marked the second top-three position this season.

Summer in the city: The WTCR – FIA World Touring Car Cup will kick off the second half of its season on the circuit of Vila Real in Portugal from July 5 to 7. The narrow streets of the fast city circuit pose a special challenge to the Audi Sport drivers and their competitors. A mass collision after the start last year showed that the track does not forgive even the smallest mistake. Furthermore, the circuit 100 kilometers east of Porto is the only venue on the calendar at which a “Joker Lap” is mandatory: in a traffic circle, the participants have to take a longer route once per race. Last year, Gordon Shedden in an Audi RS 3 LMS started from pole position on a reversed grid and achieved sixth position. The best Audi Sport driver in Vila Real a year ago was fourth-placed Jean-Karl Vernay, Shedden’s teammate in Leopard Racing Team Audi Sport. In Comtoyou Team Audi Sport, Niels Langeveld will race in Portugal for the first time. His teammate, Frédéric Vervisch, is traveling to Vila Real full of vim and vigor. In the two most recent races of the FIA WTCR at the Nürburgring, he clinched two second places in an Audi RS 3 LMS and subsequently won the 24-hour race in an Audi R8 LMS.

Victorious Audi R8 LMS at Goodwood: Audi Sport driver Frank Stippler will present to the fans the Audi R8 LMS that won the 24-hour race at Nürburgring about a week ago during the Festival of Speed at Goodwood (United Kingdom). Stippler, who was victorious in the iconic race in the Eifel together with Pierre Kaffer, Frédéric Vervisch and Dries Vanthoor, will drive the race car on Friday, Saturday and Sunday.