Skip to content
We are using cookies for a better user experience.
10/04/21
Neuburg a. d. Donau
Sport 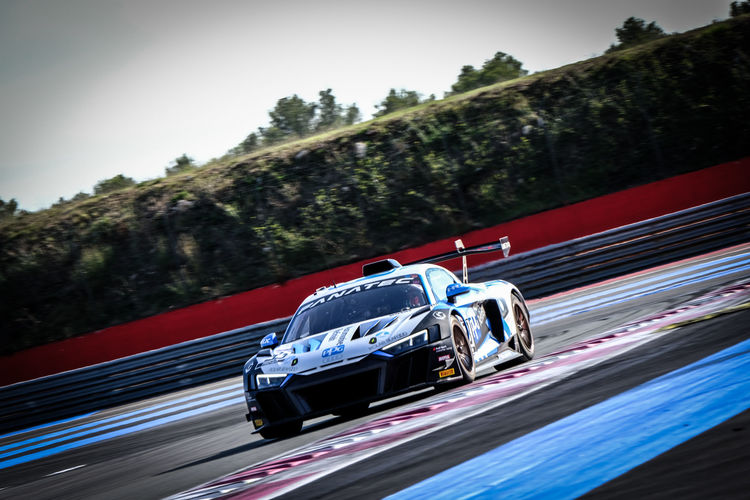 The top two Pro-Am teams in the GT2 European Series rely on Audi and now the Audi R8 LMS GT2 recorded its first title in international motorsport. The R8 LMS GT4 and RS 3 LMS models also won two titles in their classes on the first weekend in October. Meanwhile, the championship battle in the DTM and ADAC GT Masters continues to come to a head for the drivers of the Audi R8 LMS GT3.

Title success in debut season: The Audi R8 LMS GT2 is the winner of the inaugural GT2 European Series. The Danish Audi customer team High Class Racing prevailed in the Pro-Am classification on the final weekend at Le Castellet with Anders Fjordbach and Mark Patterson. In the first of two 50-minute races, Patterson started from the pit lane behind the field and moved up to sixth place by the time of the pit stop. Teammate Anders Fjordbach took over the No. 33 Audi and improved to third overall in the second half of the race, finishing second in the Pro-Am standings. Third place in this class went to title rivals Peter Guelinckx/Bert Longin from PK Carsport, who also race an Audi R8 LMS GT2. In the second race Anders Fjordbach built up a lead of 40 seconds by the time the drivers changed. Team-mate Mark Patterson only paid attention to bringing his Audi to the finish unscathed at the end. With a 9.1 second advantage he celebrated his and Fjordbach’s fifth victory of the season. This means that the Audi R8 LMS GT2 has won a total of eight of the ten races in the GT2 European Series. With six brands, the grid was better than ever before at the finale. With a 27-point lead, the Dane Anders Fjordbach and Mark Patterson – an American with South African roots – are the first Pro-Am champions of this race series that is specifically aimed at gentleman drivers. The Belgians Peter Guelinckx/Bert Longin ended the season as runners-up after finishing third in the Pro-Am class in the final race.

Two class wins in invitational race: The GT America racing series contested an invitation race outside its championship classification at Sebring on the first weekend in October. GMG Racing entered an Audi R8 LMS GT2 in the sports car series for GT2, GT3 and GT4 models. Elias Sabo won the GT2 category in both competitions. He scored seventh overall in Florida in the first 40-minute race and sixth in the second.

Audi driver team maintains championship lead: The title fight in the ADAC GT Masters is coming to a head. Christopher Mies and Ricardo Feller defended a narrow lead in the drivers standings on the fifth of seven race weekends. Audi Sport driver Mies and Swiss privateer Feller improved from fifth on the grid to third position in the first race. With five brands in the top ten positions, the ADAC GT Masters was once again fiercely contested in this race. Montaplast by Land-Motorsport was also the best Audi team in the second race. After finishing fifth on Sunday, Feller/Mies are two points ahead of the Mercedes-AMG drivers Maro Engel/Luca Stolz.

Title chance preserved: Team ABT Sportsline experienced a roller coaster of emotions at the seventh of eight rounds of the 2021 DTM season. Kelvin van der Linde managed a perfect race Saturday in the Audi R8 LMS at Hockenheim. The South African turned pole position into his fourth victory of the season. As a result, he was tied in the points standings with the previously leading Ferrari driver Liam Lawson. Mike Rockenfeller completed the Kempten-based team’s good result with another podium finish. A faulty sensor meant that the 2013 DTM champion was only 17th in qualifying, but in the race he managed to catch up to third place. On Sunday, Kelvin van der Linde secured his fifth pole position and was thus briefly the leader of the standings. Due to regulations, he started the race with 25 kilograms of success ballast. After a collision with Liam Lawson he received two five-second penalties and only finished in tenth place. With a 14-point gap, the South African will travel to the finale at the Norisring next weekend in second place in the standings, where he is one of four drivers who still have a chance of winning the title.

Podium at the Hungaroring: Team Rutronik Racing by TECE achieved a podium finish at the sixth round of the 24H Series. Audi Sport driver Pierre Kaffer and his teammates Michael Doppelmayr and Swen Herberger finished third overall at the Hungaroring after twelve hours of racing in the Audi R8 LMS. 27.3 seconds behind followed their brand colleagues Nathanaël Berthon, Martin Rump and Martin Lechman. They were driving an Audi R8 LMS of the Car Collection Motorsport team in the new evo II version which has not yet been homologated. As the only participants, this driver trio won the P4 prototype class.

Season wins number five and six: Uwe Alzen managed a flawless weekend with the Audi R8 LMS in the Special Touring Car Trophy in difficult conditions at the Nürburgring. The privateer built up an advantage of 2.13 minutes over the course of 14 laps in the rainy first sprint on the fourth race weekend. The second race started on a dry track, but after five laps rain forced the competitors, who started mainly on slicks, to change tires. Despite a time penalty, Uwe Alzen subsequently celebrated his sixth win of the season.

Title success in France: Audi Sport’s customer teams ended the GT4 France season with a decent result. Gregory Guilvert/Fabien Michal won Saturday’s race at Le Castellet for Saintéloc Racing in the Audi R8 LMS GT4 as the best Pro-Am team. It was their second victory of the season. Sacha Bottemanne/Lonni Martins from Team Fullmotorsport in another Audi followed just one second behind, thus claiming the Silver classification. On Sunday, Michal/Guilvert had to admit defeat in second place after one hour of racing by only 0.197 seconds. This makes them runners-up in the Pro-Am classification after having won this category three times in a row from 2018 to 2020. Nevertheless, Audi also has a championship title to celebrate in 2021: After their seventh Am class victory in eleven races, Christophe Hamon/Pascal Huteau with Fullmotorsport were delighted to clinch the title in the Am championship classification of the French GT4 racing series for the first time as early as Saturday.

Class success in South Africa: On the fifth race weekend of the South African GT Challenge in East London, Marius Jackson recorded a class victory. The South African in the Audi R8 LMS GT4 was the only participant to win his class in the one-hour race.

Leading the standings in South America: Rodrigo Baptista is the new leader of the TCR South America after the fourth race weekend in the Audi RS 3 LMS. The Brazilian from the Cobra Racing Team won both races on the El Pinar circuit in Uruguay not far from the capital Montevideo. From pole position, Baptista beat Honda driver Pepe Oriola by 9.4 seconds in the first race. The reversed starting grid for the second sprint meant grid position ten for the Audi driver. After two laps he had already made up five places. As the race progressed, he improved to second place behind Oriola when the latter retired with damage. So Baptista won by 9.4 seconds ahead of Lynk & Co driver Pablo Otero. At the halfway point of the season, Rodrigo Baptista leads the standings by eight points ahead of Oriola.

At the top of the standings in Spain: Mirco van Nostrum and Alvaro Fontes took the lead of the TCR standings in the Campeonato de España de Resistencia on the fourth race weekend. At the Jerez circuit, they finished third in the first race in the Audi RS 3 LMS and won the second. They are now 25.2 points ahead of Ruben Fernandez before the finale at Barcelona.

Two podium results in Scandinavia: Tobias Brink returns home with two trophies from the fifth race weekend of TCR Scandinavia. The privateer driver finished the first of three sprints at Knutstorp in third place in the Audi RS 3 LMS. After finishing fourth in the second race, Brink kept a cool head in the position battles of the third sprint and drove from grid position four to third place. As a result, the Swede is third in the standings ahead of the finale at Knutstorp next weekend.

Catching up in the title fight: Ahead of the 24H Series finale at Sebring in November, the Audi customer team AC Motorsport has made up four points in the fight for the TCR title. Frenchman Stéphane Perrin and his Belgian teammate Mathieu Detry finished second in the TCR standings at the 12 Hours of Hungary in the Audi RS 3 LMS. As a result, the second-placed AC Motorsport squad with Audi reduced its gap to the leading Volkswagen team Autorama Motorsport to eight points.

Two podium results and a class title at Monza: Steven Giacon celebrated two podium finishes at the finale of the Coppa Italia Turismo at Monza. The Italian clinched two third-place finishes in the Audi RS 3 LMS fielded by Team Tecnodom Sport. Carlotta Fedeli was delighted with a class title at the end of the season. She won the TCR DSG classification for race cars with dual-clutch transmissions in the Audi RS 3 LMS of RC Motorsport. The Roman is one of 16 competitors who competed with this transmission in 2021.

Third place in the Eifel: Max Frederik Gruhn clinched a trophy at the fourth round of the Special Touring Car Trophy. The Northern German finished third in Class 4 in the first race at the Nürburgring in the Audi RS 3 LMS.