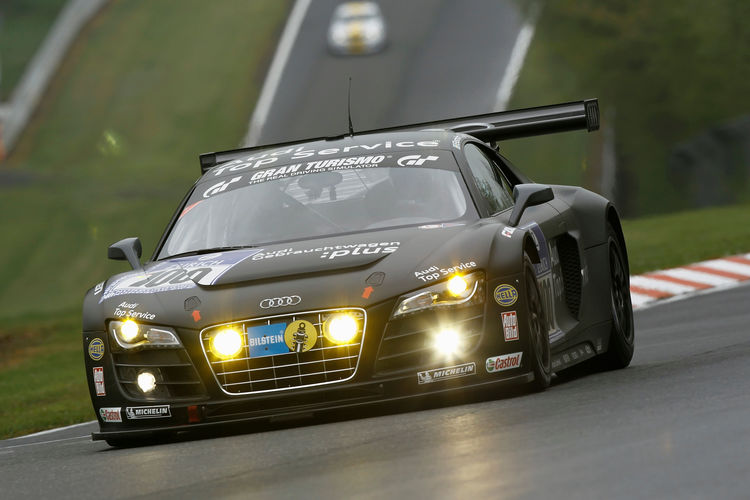 The Audi R8 LMS looks to be the car to beat in the 38th running of the 24-hour race at the Nürburgring: Four of the fascinating mid-engine sportscars start the race on Saturday at 3:00 p.m. from the first four grid positions.

The two Audi customer teams ABT Sportsline and Phoenix Racing had the correct strategy in qualifying: After it had rained during first qualifying on Thursday and the Nordschleife was still very dirty and slippery at the start of Friday's second qualifying session, the two teams only went gunning for lap times shortly before the end of the final two-hour qualifying session. Lucas Luhr (ABT Sportsline/8m 27.967s) and Mike Rockenfeller (Phoenix Racing/8m 25.782s) initially used the now considerably superior conditions to set new fastest laps before they were beaten by Marco Werner (ABT Sportsline) with 8m 24.753s. Rockenfeller was still able to improve to 8m 25.568s on his last lap, but remained in second position. Pierre Kaffer (Phoenix Racing) completed the Audi quartet at the head of the field after posting a 8m 29.250s lap.

As a result, an Audi starts from pole position for the first time in the history of the 24-hour race at the Nürburgring. “That four of our customer cars occupy the first four grid positions underlines the qualities of the Audi R8 LMS on the world's longest and most demanding race track and is fantastic advertising for our new customer car, which we have developed over the last two-and-a-half years,” explained Head of Audi Motorsport Dr. Wolfgang Ullrich, who follows the Audi customer teams' preparations himself on location, and in doing so demonstrates how important the new customer sport programmed with the Audi R8 LMS is for Audi Sport.

Marco Werner broke the existing lap record for the current Nürburgring circuit layout by almost two seconds and, in the process, underlined the progress made during the further development of the Audi R8 LMS and how good the Michelin tires work on the cars from ABT and Phoenix. “We are satisfied to be on pole position, even though it isn't really a very important step for a 24-hour race,” explained the three-time Le Mans winner. “It's always ‘nice to have’. It was important that we had a few laps in the dry to see just how the car handles. We were unable to work in the set-up in the previous practice sessions, since the conditions were always very difficult. At least it was dry today. I was really fighting in the car. My lap was good, I only came across traffic on two or three occasions. That is the key to success for the last few seconds, which is what it was about in the end and led to pole position. We could show that Audi and ABT have produced a good package with the R8 LMS. Thanks also to Michelin, to whom we only switched to last week. Everything worked well.”

The three other Audi R8 LMS start on Saturday from positions 12, 17 and 22. The third Phoenix Racing R8 LMS had an accident in first qualifying on Thursday evening in which the car's front end was damaged. The team Black Falcon Audi R8 LMS #102 made contact twice with the guardrails in final practice.

The 38th running of the 24-hour race at the Nürburgring is started in Saturday at 3:00 p.m. Sport1 broadcasts 20 hours live. During the formation lap one of the limited edition of 333 Audi R8 GT will lead the starter field.

Since 2002, Audi is partner of the 24-hour race at the Nürburgring through its sports subsidiary quattro GmbH, but is still missing from the endurance classic's winners' list. The Audi customer team ABT Sportsline and Phoenix Racing, who share the first two rows, now have an excellent chance to change this.