Skip to content
We are using cookies for a better user experience.
05/12/18
Nürburg/Neuburg a. d. Donau
Sports 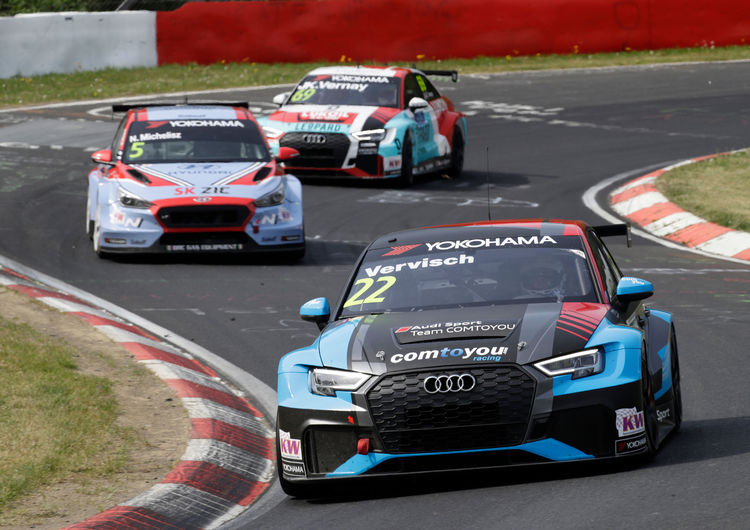 At the Nürburgring, Audi Sport Team Comtoyou achieved its breakthrough in the WTCR – FIA World Touring Car Cup. In the series’ third event, Frédéric Vervisch on clinching a third and a second place celebrated his first two podium results. His teammate from Comtoyou Racing, Nathanaël Berthon, scored his first points in the Eifel as well.

Frédéric Vervisch displayed his skills on the challenging Nordschleife in commanding style. In race one the Belgian was on course for points when an unfortunate incident knocked him out of the competition. A piece of debris on the track had destroyed the radiator of his Audi, forcing him to retire. In race two, the 31-year-old Audi Sport campaigner stormed forward from grid position nine to third place. In a thrilling slipstream duel at Döttinger Höhe shortly before the finish, Vervisch prevailed in the battle for third position. In race three, he improved once more. This time the Belgian mounted the podium in second place.

“Sincere congratulations to Frédéric and to Audi Sport Team Comtoyou,” said Chris Reinke, Head of Audi Sport customer racing. “On several previous occasions, it was obvious that the team and drivers are in contention for podium positions, but they were lacking the necessary racing fortune. This weekend, they broke their duck. Five of seven Audi RS 3 LMS cars scored points at the Nürburgring. This is the best team result to date.” The drivers finishing in the points included René Rast from Audi Sport Team WRT. The DTM Champion thrilled the fans in the “Green Hell” with his versatile talent as a guest entrant. Like Vervisch the German is competing in two events, switching back and forth between the Audi R8 LMS GT3 sports car for the 24-hour race and the Audi RS 3 LMS. In the FIA WTCR, he qualified for grid position six in race one and went on to cross the finish line in sixth place as well. Rast started race two from second on the grid but a rival forced him off track as early as on the Grand Prix circuit.

The second-best single results of the weekend for Audi, trailing Frédéric Vervisch, were clinched by two Frenchmen. Jean-Karl Vernay from Audi Sport Leopard Lukoil Team achieved fifth place in race one and Nathanaël Berthon from Team Comtoyou Racing placed fifth in race three. Vernay’s teammate, Gordon Shedden, was the fifth Audi driver to score points this weekend. The Scotsman clinched position seven in the opening race. In the same race, Aurélien Panis took eleventh place. The Frenchman repeated his personal best performance this season in race three. On clinching twelfth place in the opening race, Belgian Denis Dupont achieved his personal best results this year at the Nürburgring as well.

In just one week’s time, the fourth race weekend of the FIA WTCR is on the calendar. For the drivers, the dune circuit at Zandvoort on the Dutch North Sea coast with its undulations and many fast sections will pose the next nice challenge.