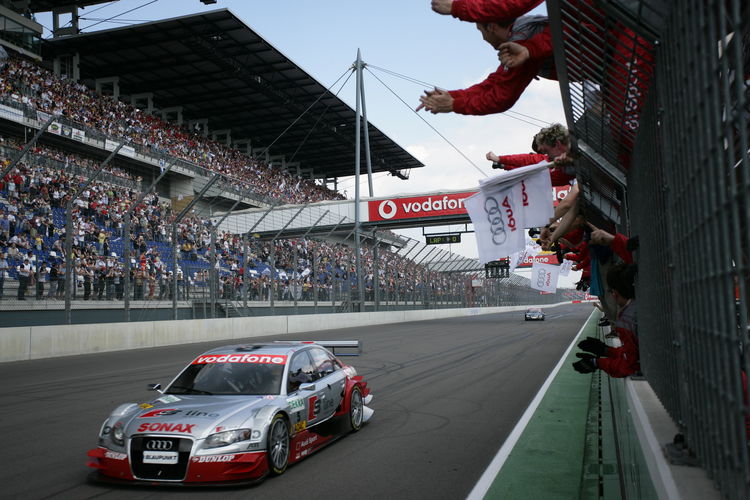 In front of an impressive backdrop of 78,000 spectators, Tom Kristensen claimed the first podium position for the new Audi A4 DTM at EuroSpeedway Lausitz. Following a Qualifying session that had not produced optimum results for Audi, the Dane – having started from seventh place – fought his way up to finish the race in second place. In the final phase of the race he managed to hold his ground against the pressure exerted by double Formula 1 World Champion Mika Häkkinen. With a fourth-place finish, Mattias Ekström clinched five valuable Championship points despite the fact that the front of his A4 had suffered severe damage in a collision. In addition, a drive-through penalty had been imposed on the Swede.

DTM newcomer Pierre Kaffer served as a rear guard for the current Champion in the final phase, after having advanced from 19th to fifth place in spectacular fashion. The Audi driver was thus the best competitor at the wheel of a car from last year. Frank Stippler, as well, claimed his first DTM points with a sixth-place finish, thus completing the strong result of the Audi squad. Christian Abt – finishing ninth – barely missed scoring a point. Rinaldo Capello finished in eleventh place, Martin Tomczyk in twelfth despite a puntured tyre. Allan McNish retired after a collision.

Tom Kristensen (Audi Sport Team Abt #5)
2nd place, + 4.472s
“There’s one thing the DTM has taught me: never give up and keep fighting all the way through to the final lap, and that’s exactly what I did today. Despite a starting position that was anything but optimum, we were able to claim second place today thanks to a very good strategy and two perfect pit stops. After my second tyre change Mika Häkkinen was pushing hard behind me up to the point of crossing the finishing line, but I had the situation under control the whole time.”

Mattias Ekström (Audi Sport Team Abt Sportsline #1)
4th place, + 34.856s
“The race was pretty tough and strenuous. There are not so many straights at the new EuroSpeedway – and overtaking is very difficult. I was clearly quicker than the guy in front of me and tried to pass him. Of course, I didn’t mean to touch him, but sometimes you’ve just got to take a certain risk. I don’t think the fans would like to watch us simply following each other over 48 laps.”

Pierre Kaffer (Audi Sport Team Joest Racing #15)
5th place, + 35.284s
“I’m overjoyed to have scored points only in my second DTM race. That’s simply a dream come true! Too bad I fluffed the start. I wanted to drive off with less wheel spin, and that caused the engine to stall briefly. After this, the race was simply perfect. I drove super times and our strategy, which was a bit different from those of our rivals, worked out too.”

Frank Stippler (Audi Sport Team Joest #19)
6th place, + 42.299s
“I did lose the team duel against Pierre but, aside from this, I’m highly satisfied. Advancing from 14th to sixth place in a car from last year is a respectable result. I had a good start, but then didn’t push as hard as I could have because I didn’t know how the tyres would hold up. In retrospect, I could have attacked more. But that’s the type of experience I’m still lacking.”

Christian Abt (Audi Sport Team Joest Racing #14)
9th place, + 51.639s
“In the race we did everything right. It was very difficult because I had started so far back on the grid and had to overtake a large number of cars. I didn’t take any unnecessary risks, kept waiting until the window of opportunity was open all the way and then started overtaking. Compliments to the team! The car is really quick. Now, I’m really looking forward to Spa.”

Rinaldo Capello (Audi Sport Team Joest #18)
11th place, + 58.430s
“As in practice at Hockenheim and here, my car was understeering too much in the race. I’m very exhausted, it was incredibly strenuous to keep the car on the track. This is a problem we really need to resolve together with my race engineer before we go to Spa.”

Martin Tomczyk (Audi Sport Team Abt Sportsline #2)
12th place, + 1m 00.167s
“On the first lap I wanted to overtake a competitor on the inside of the new corner, approaching the situation very cautiously. Still, we touched each other lightly, and my right front tyre was slit in the process. Of course it’s a shame that, once more, I wasn’t able to score any points, particularly considering the fact that my performance was good after suffering the puncture.”

Allan McNish (Audi Sport Team Abt #6)
Retired (collision)
“In the first turn I was hit from behind and that damaged the right rear fender. Due to the resulting lack of downforce my car started to oversteer a bit. Nevertheless, things were going pretty well. After the first pit stop, which was very quick, I took advantage of a rival’s mistake. I was halfway side by side with him when he suddenly turned in. I don’t think he even saw me. We touched each other and that was the end of my race. That’s racing...”

Hans-Jürgen Abt (Team Director Audi Sport Team Abt Sportsline): “I’m very happy, because that was a strong team performance. Everyone in the entire Audi squad worked together tremendously today to make the best of the situation we were in after the Qualifying. I think we managed that pretty well. And the atmosphere in the crowded grandstands was yet again fantastic.”

Ralf Jüttner (Technical Director Audi Sport Team Joest): “Pierre and Frank both drove a super race today and their points are well deserved. But Christian and Dindo, as well, made the best of their starting positions to complete the fantastic result achieved by the whole squad. We had eight super pit stops and have had one car from each of our two crews finish in the points. Now, after only two races, our points score is already higher than our total score for all of last year!”

Dr Wolfgang Ullrich (Head of Audi Motorsport): “We’ve seen a very good race. In terms of speed we were part of the action again. Tom drove an outstanding race. It was a great duel with Mika over the whole distance. Mattias was a bit unlucky but was still able to claim points. And our cars from last year were generally very strong. Pierre Kaffer drove the second quickest lap in the race, and I think that’s really remarkable.”