Skip to content
We are using cookies for a better user experience.
06/27/19
Neuburg a. d. Donau
Sport

Links
{{ activeItem() }}
Twitter
06/21/21
Up next on the calendar: New York City E-Prix, from July 10–11. Rounds 10 and 11 of the @FIAFormulaE World Champion… https://t.co/akj67cze0V
06/21/21
Well done to our customers worldwide: 1–2 @DTM victory for the R8 LMS, extending the lead in the @gt4series with th… https://t.co/4ReoClQsvP
06/21/21
MEDIAINFO: First DTM victory of the Audi R8 LMS &gt;&gt; https://t.co/x1EwL5CqZh #PerformanceIsAnAttitude #GT3 #GT2… https://t.co/31OFJMmbKY
06/21/21
We’re back in the @FIAFormulaE title fight. Bring on New York, from July 10–11. &gt;&gt; https://t.co/ktQ0jlvX5F… https://t.co/EpM7ft67AU
Audi Sport on Twitter
{{ activeItem() }}
Facebook
06/21/21
1-2 victory for the Audi R8 LMS in the DTM, the Audi R8 LMS GT4 extends its lead in the GT4 European Series and race wins for the Audi RS 3 LMS in five countries – well done to our customers for a strong race weekend worldwide. 🇮🇹 🇳🇱 🇩🇰 🇿🇦 🇸🇪 🇷🇺 🇪🇪 >> audi.com/GT3 >> audi.com/GT4 >> audi.com/TCR #PerformanceIsAnAttitude
06/21/21
René Rast charged forward from last place into the points by finishing tenth and setting the fastest lap in the ABB Formula E Puebla E-Prix. It was not Lucas Di Grassi’s day in 18th, but after yesterday’s 1-2 victory and valuable points, we are back in the title fight. Up next: New York E-Prix, July 10–11. >> audi.com/FormulaE #FutureIsAnAttitude #PueblaEPrix
06/20/21
Looking back on our 1-2 victory in Mexico yesterday with Lucas Di Grassi, René Rast and Allan McNish. The next ABB Formula E race is coming up today at 16:04 local time, GMT-5 (23:04 CEST). 🇲🇽 >> audi.com/FormulaE #FutureIsAnAttitude #PueblaEPrix
06/20/21
1-2 victory in Mexico! 🇲🇽 Lucas Di Grassi won today’s ABB Formula E Puebla E-Prix ahead of René Rast. Well done to the entire Audi Sport ABT Schaeffler team! >> audi.com/FormulaE #FutureIsAnAttitude #PueblaEPrix
Audi Sport on Facebook 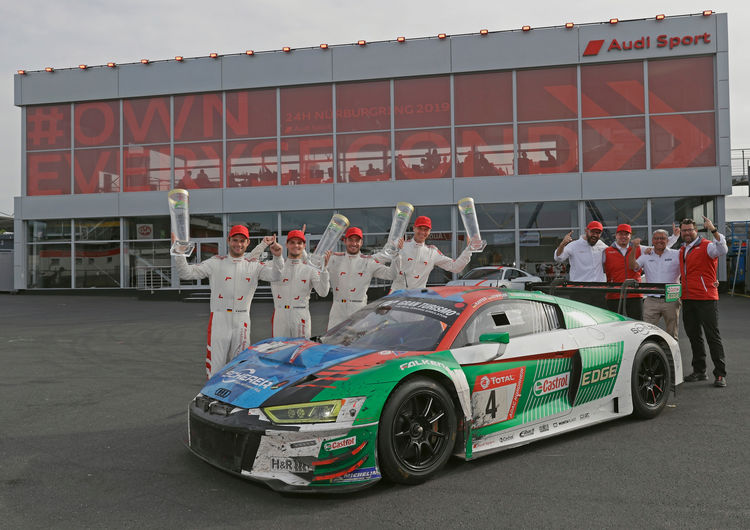 On June 23, Audi Sport customer racing celebrated its fifth victory in the 24 Hours of Nürburgring. Background information and facts pertaining to this success.

The victory of the number 4 Audi R8 LMS in the 47th running of the 24-hour race at the Nürburgring marked the fifth since 2012. In that year as well as this time, Audi Sport Team Phoenix based in Meuspath at the Nürburgring triumphed at its home round.

As a result, the GT3 sports car, which is closely oriented to the production model with 50 percent carryover parts, has achieved a win rate of 45 percent in eleven fieldings in this race ever since Audi Sport’s customer racing program was launched in 2009. No other manufacturer has been more successful in this competition during this period of time.

Not only Audi has now won this iconic race on five occasions, but so has Team Phoenix Racing. In 2012, 2014 and 2019, both organizations were jointly successful with the Audi R8 LMS. In addition, Ernst Moser’s squad scored two victories, in 2000 and 2003.

In total, the Audi R8 LMS has now clinched 13 overall victories in worldwide 24-hour races since 2009.

The evolution of the Audi R8 LMS that has been available to customers since the 2019 season has achieved its second overall victory in a 24-hour race in only six months. Team Car Collection Motorsport was victorious when the new model debuted in the 24-hour race in Dubai in January. Both times at the wheel in that as well as in this 24-hour event, albeit with different teammates, was Frédéric Vervisch.

Audi Sport driver Frédéric Vervisch delivered a double dose of powerful performance at the Nürburgring: The Belgian not only competed in the 24-hour race in an Audi R8 LMS. Prior to that, he had contested three sprint races of the WTCR FIA World Touring Car Cup on the Nordschleife on the same weekend in an Audi RS 3 LMS. With two second places in those events, he was the best Audi Sport driver and thus improved from eleventh to fifth place in the standings halfway through the season.

32-year-old Frédéric Vervisch celebrated his first victory in the 24-hour race in the Eifel, just like his Belgian compatriot Dries Vanthoor, who is eleven years younger. Pierre Kaffer from Burgbrohl in the Eifel achieved the first success in his home round at age 42. Frank Stippler, a native of Cologne, proves that experience pays off – even at the age of 44, he remains one of the best on the Nordschleife. In 2012, he won the race with Audi for the first time. The average age of the winning quartet is 34.75 years.

For race engineer Sébastien Breuil, this was the first victory in a 24-hour race. The Frenchman in the employ of Phoenix Racing was responsible for successfully taking the driver quartet through the race. In addition to the skills of the drivers and the team, he also attributes the success to the choice of the right tire at the respective times of the race. Partner Michelin had made three slick rubber compounds available. With 20 pit stops, the number 4 Audi R8 LMS drove to victory on 20 sets of tires.

The first-placed Audi R8 LMS with chassis number AS4SAFGT201700089 also has previous experience on the Nordschleife because it was on the grid of the 24-hour race last year. Since then, the race car has run in other endurance races including the 24-hour race at Spa and the California 8 Hours. The employees of Audi Sport have nicknamed this Audi R8 LMS Lucie – after a member of the team that fielded this race car in 2017.

For Dries Vanthoor, its fielding, in a manner of speaking, resulted in recompense for previously suffered misfortune. Last year, he had been on the Nürburgring grid in precisely this race car chassis with Audi Sport Team WRT. However, from a promising position the Belgian retired after an accident while lapping another car. Following the repair, the Audi R8 LMS, now with Audi Sport Team Phoenix and again in Dries Vanthoor’s hands, proved its qualities as an excellent previous-generation car.

157 times the number 4 Audi R8 LMS lapped the 25.378-kilometer race track, which equates to a distance of 3,984.346 kilometers. The absolute distance record of 159 laps in this race was set in 2014. Audi Sport Team Phoenix had achieved it with the Audi R8 LMS ultra and drivers Christopher Haase, Christian Mamerow, René Rast and Markus Winkelhock at that time.

If one compared this distance with a travel distance on public roads, it would correspond to about 8.3 times the distance between Audi’s Ingolstadt location and the Nürburgring. If it were covered at the same pace set by the race drivers in the Eifel, it would amount to more than four return trips within just one day and one night.

The race duration of exactly 24h08m14.647s results in an average speed of 165.069 km/h for the victorious Audi R8 LMS at the Nürburgring including all pit stops.

The 47th running of the 24-hour race saw the lead change only six times, with only four different cars taking turns in the top spot. The number 4 Audi R8 LMS was leading the field on the last 16 laps.