Facts on the fourth Audi victory at the Nürburgring 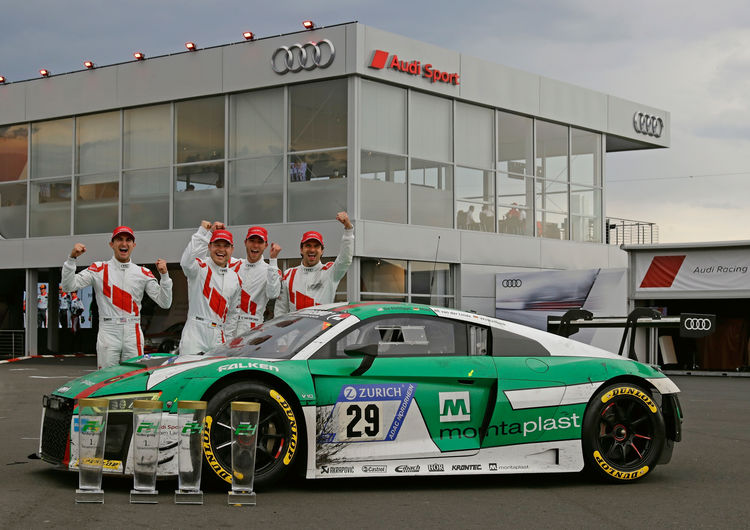 On May 28, Audi won the Nürburgring 24 Hours for the fourth time. The background and the facts on the victory in the Eifel.

The victorious Audi R8 LMS with the AS4SAFGT201700069 chassis number had already been in use in Asia. It had contested the FIA GT World Cup in November 2016 in Macau and the Sepang 12 Hours in December, and it also competed in a VLN race before it went to the 24-hour race. The Audi Sport employees like to personalize their race cars, and gave this future winning car the name Catalena.

The lead changed hands 21 times during the race. After only six of these 21 moments was Audi not at the front. From the 26th race lap, Audi was uninterruptedly at the front – that means from 19:30 on Saturday evening until the finish on Sunday at 15:30.

For only the second time in the history of the race, which has been held since 1970, a participant surpassed the 4,000-kilometer mark. The first time was achieved by Audi Sport Team Phoenix in 2014, which drove 4,035 kilometers. Therefore, the Audi R8 LMS remains the only car to have driven more than 4,000 kilometers on the Nürburgring in the given time of 24 hours.

The record distance from 2014 would almost have been matched. The computer simulations suggested to the engineers, up until the last hour of the race, that 159 laps would have been possible. The onset of the rainstorm half an hour before the end of the race, however, made these calculations void – the drivers had to reduce the pace too much on the wet road.

If the Audi R8 LMS had an odometer like its road-going counterpart, the numbers would have gone up quite considerably on the last weekend of May. From the first Free Practice on Thursday to the finish on Sunday, the winners’ green and white race car covered 4,872.576 kilometers. This is the same distance as between Ingolstadt and the north of the Canadian province of Québec.

The victorious driver quartet represent different successes: Connor De Phillippi and Kelvin van der Linde each celebrated their first victory in this race, Christopher Mies his second after 2015, and Markus Winkelhock already his third after 2012 and 2014 – all drivers winning each time with Audi. Within the Winkelhock family, it is now 3:2. Markus is ahead of his uncle Joachim – winner in 1990 and 1991 – by one victory.

Whilst Markus Winkelhock and Kelvin van der Linde shared the winning car in 2017, there was a successful association between both families in motor racing 23 years ago. Kelvin’s father Shaun and Joachim Winkelhock won two of the four rounds of the 1994 International Touring Car Challenge in Kyalami, South Africa.

There was a first for a particular nationality too: Kelvin van der Linde is the first South African to have won this race, whilst Connor De Phillippi was only the second American after his compatriot Boris Said’s triumph in 2005.

With Audi Sport Team Land from Niederdreisbach, it is the third time an Audi team from Rhineland-Palatinate has won the competition. Prior to this, Audi Sport Team Phoenix, based at the Nürburgring, had won in the years 2012 and 2014. In addition, Audi Sport Team WRT contributed a Belgian Audi success in 2015.

The average age of this year’s winners was 27. Christopher Mies celebrated his 28th birthday three days before the start. Markus Winkelhock is 36 years old. Connor De Phillippi is 24 and Kelvin van der Linde is only 20 years old.

Despite his young age and little Nordschleife experience, Kelvin van der Linde shone with outstanding lap times, including the fastest lap out of the whole Audi squad. When the decision was made on who could drive the Audi R8 LMS to the finish line, the team and their racing drivers quickly agreed on the South African. Van der Linde did not acquire his Nordschleife permit until the end of 2015, and his experiences were limited to the Nürburgring 24 Hour race and a VLN race in 2016 as well as another VLN round and the qualification race in April 2017.

29 is the team’s new lucky number. With it, Christopher Mies/Connor De Phillippi won the ADAC GT Masters with the Audi R8 LMS in 2016, and now with their teammates the 24-hour race as well.

In a regular lap of the Nürburgring-Nordschleife, the drivers change gear with the six-speed transmission of the Audi R8 LMS 101 times. This results in nearly 16,000 gear shifts over the entire race distance.

In the 21 individual race stints that the victorious Audi R8 LMS completed between the pit stops from start to finish, the team put on 20 sets of slick tires from Dunlop. Race engineer Wolfgang Martens decided on soft rubber compound four times, nine times on medium tires and seven times on hard slicks. At the end of the race, the team made a clever tactical choice for the 21st set of tires: the Dunlop tire with grooves was the perfect choice for the rain showers and a key to victory.

At the Nürburgring, Wolfgang Land’s company ranks among the best and most experienced teams on the scene with 22 VLN victories. However, a victory in the 24-hour race had so far eluded the crew from Westerwald. In Dubai, the team celebrated its first 24-hour racing victory eight years ago. The success with Audi in the Eifel was its second overall victory in a marathon twice round the clock, on top of its two class victories at Spa. A total of 23 employees of the team were deployed at the Nürburgring for two racing cars.

Whilst the Audi R8 LMS has been competing in the Eifel since 2009, today’s Audi Sport GmbH had already been involved in the action at the Nürburgring before then. Audi was a partner of the organizer for the 16th time – since 2002, the officials have relied on models with the Four Rings. This year, Audi presented 13 cars: one R8 Coupé V10 plus, one RS 5 Coupé, one A8, five RS 6 Avant and five A6 Avant.

For the first time, the three current models from Audi Sport customer racing were represented in a single competition. In addition to six Audi R8 LMS cars in GT3 specification, there was a debut for two Audi R8 LMS GT4 cars, whilst customers relied on a total of three Audi RS 3 LMS cars.

In addition, a modified race car from an earlier Audi Sport customer racing production was successful. The Audi TT RS of Ulrich Andree/Daniela Schmid/Christian Schmitz/Stefan Wieninger contributed a victory in the SP 3T class. The team LMS Engineering held their own against factory-backed outfits from three well-known Asian automotive manufacturers.