Facts on the fourth Audi victory at Spa 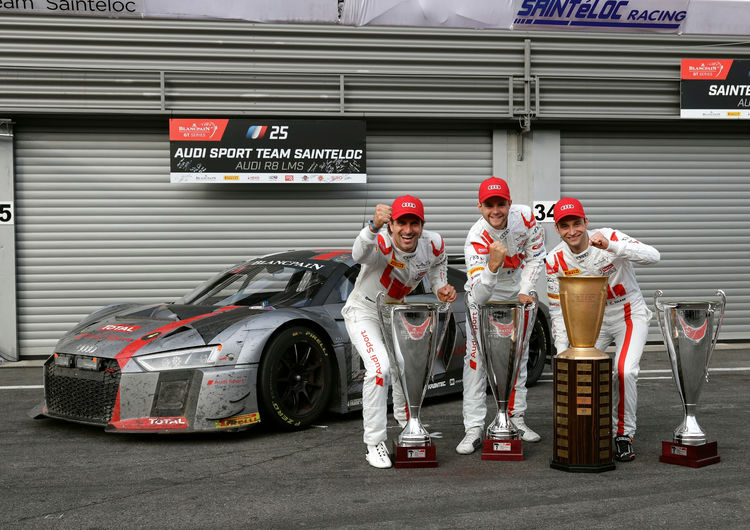 On July 30, Audi won the Spa 24 Hours for the fourth time. The background information and the facts about the victory in the Ardennes.

The race-winning Audi R8 LMS, which carries the chassis number AS4SAFGT201700072, was also used at this year’s Nürburgring 24 Hours. Audi Sport Team Land used the car as the number 28 entry at that event.

A total of 58 lead changes occurred during the race, more than double the number seen in the Nürburgring 24 Hours in May. The field was extremely balanced.

After 546 laps, the victorious Audi R8 LMS had covered exactly 3,824.184 kilometers. With that, the race-winning crew travelled farther than the race winners of the previous three years. The race lasted for 24 hours and 51.980 seconds and had an average speed of 159.245 km/h, including the time that the winning car was stationary in the pits.

If the Audi R8 LMS had an odometer like its road-going counterpart, then it would have recorded an increase of 4,216.408 kilometers during the last week of July. 602 laps were completed by the drivers from the first free practice on Thursday to the finish on Sunday. This is equivalent to 6.4 times the distance from the headquarters of Audi Sport customer racing in Neuburg an der Donau to the race track in Spa-Francorchamps.

The victorious three drivers each had quite different experiences with the race at Spa: For Jules Gounon, it was his first participation with a factory team and also his first win in a 24-hour race. Christopher Haase had already won the Nürburgring 24 Hours, but not the Spa 24 Hours. Markus Winkelhock had already won both of these races for Audi. In 2017, he won both of these two races in one season, which he also achieved in 2014.

Within the trio of drivers, not only Markus Winkelhock had a father who was also a race driver. Jules Gounon’s father, Jean-Marc Gounon, was also a race driver competing in international events. Among other things, he drove an Audi R8 LMP sports car for the Oreca team in the 2005 Le Mans 24 Hours, finishing fourth.

Audi Sport Team Saintéloc has won a 24-hour race with Audi for the first time. The team from Saint-Étienne had not won a twice-around-the-clock marathon before this achievement. In 2010, the team was also among the first to commit to using the Audi R8 LMS.

Normally, race teams are named after the team owner’s name, or an acronym of that is being used. In the case of Audi Sport Team Saintéloc, it is a bit different. The team’s home is Saint-Étienne. During the 1970s, there was a successful football club. The club’s fans always chanted “Sainté.” This nickname was taken by team boss Sébastien Chetail and used for his racing team in 2004. The suffix “loc” refers to “location de voitures de course”, the usual practice of renting race cars in customer racing.

The car sporting the number 25 did not begin the event as one of the race favorites. Markus Winkelhock, who drove the opening stint, started the race from nineteenth on the grid. The car led for the first time in lap 166. During the night, the number 25 car had even found itself one lap behind the race leader. The trio of drivers who finally won the race, only moved back permanently onto the lead lap on Sunday morning, after 359 laps had been completed.

The average age of the three race winners was 29.3 years. Jules Gounon is the youngest at 22 years of age. Christopher Haase is 29 and Markus Winkelhock 37 years old.

Jules Gounon completed seven driving stints during the journey to victory. Christopher Haase and Markus Winkelhock each sat in the car ten times. The time the car spent stationary in the pits, which includes all of the pit stops with refueling, tire changes and a planned service of the brakes, totaled one hour and 41 seconds. The only unscheduled service was because of a wheel that was not fastened properly, which required an additional pit stop.

During the course of a normal lap on the 7.004-kilometer Spa circuit, the drivers change gear 39 times with the six-speed transmission of the Audi R8 LMS. This resulted in 21,294 gear changes during the 24-hour race.

The different phases of the race saw the team using 26 sets of slick tires and one set of wet tires during the night, with all of the tires being supplied by Pirelli. These strategic decisions were made by Nicolas Drouelle and Nicolas Chomat, who worked together as the engineers of the number 25 entry.

The Audi R8 LMS has already celebrated eleven overall victories in 24-hour races. The GT3 race car has been victorious at the Nürburgring and Spa four times at each venue. In addition, two triumphs were also achieved in the Zolder 24 Hours and one in the Dubai 24 Hours.

The number “69” has always been one of special importance to Jules Gounon. It was his preferred starting number during his time in go-karting. 69 days before the start, Audi confirmed his entry in the 69th edition of the Spa 24 Hours. The planned flight would have been his 69th of this year, but it was cancelled. So during the night from Tuesday to Wednesday, the newcomer had to drive 800 kilometers from southern France to Belgium, in order to be able to attend his first appointments in time on Wednesday.

Markus Winkelhock normally does not believe in any superstitions. When he traveled directly from the ADAC GT Masters race weekend in Zandvoort (the Netherlands) to Spa in Belgium, he booked himself a one-night stay in a lodge popular among race drivers. The owner, who is a motorsport enthusiast, named each of the rooms after famous race drivers. Thus, there is also a room named “Markus Winkelhock”. But the staff did not assign this room to the Audi driver. Instead, he spent the night in the “Eric van de Poele” room. The Belgian is a record holder with five wins at the Spa 24 Hours. Whenever van de Poele stayed in the room with his name, he won the race. The one time he slept in another room, he did not win. The hotel owner wanted Winkelhock to win the race and therefore explicitly allocated this room to him. Markus Winkelhock visited him again on the Monday after the victory and thanked him very warmly.

At the autograph session on Wednesday, which took place in the city center of Spa, the three drivers spontaneously decided to sign the rear wing of their race car. They also convinced the mechanics of this idea. “I’ve never done anything like this before,” said Christopher Haase. “The idea embodied the good team spirit, which was also present throughout the weekend.”