Facts on the 13th Le Mans victory of Audi 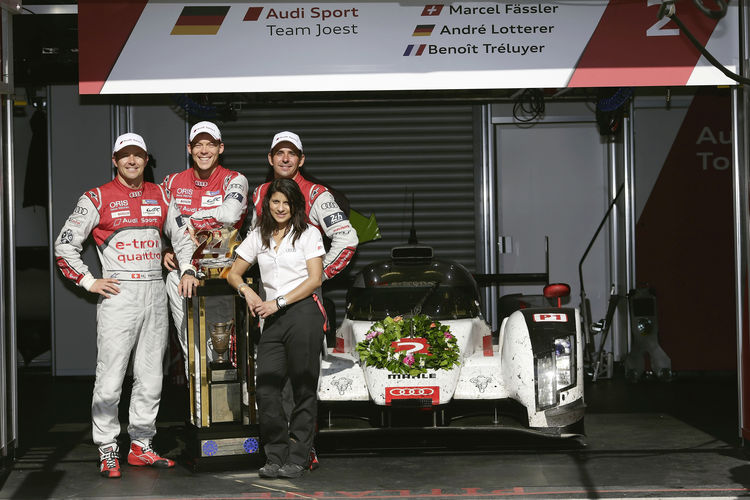 The current Audi R18 e-tron quattro on clinching its Le Mans victory consumed 22 percent less fuel than its predecessor in 2013. With that, Audi has again raised the benchmark.

The regulations allow the Audi R18 e-tron quattro to use clearly less fuel than last year. Audi saved energy through the use of ultra technologies such as optimized aerodynamics, 45 kilograms less weight of the race car, a newly developed 4-liter V6 TDI engine, an optimized hybrid system and a new driveline.

In total, Audi’s victorious hybrid sports car designated as car number 2 used 22 percent less fuel per 100 kilometers than the 2013 R18 e-tron quattro. Ever since the TDI era began in racing in 2006 this has resulted in a 38-percent consumption reduction.

After LED headlights with matrix beam technology had made their way from the Audi R18 e-tron quattro into production cars a year ago, the new Audi laser light is the most recent innovation that has been tested at Le Mans and will now initially be available to customers in a special model.

With 13 victories in 16 events Audi has increased its Le Mans success rate to 81.25 percent. No other automobile manufacturer in the history of the race that has been held since 1923 has clinched such a large number of winners’ trophies in such a short time. Porsche – with a tally of 16 victories – remains the historic record holder. These wins are spread across the period between 1970 and today.

In addition to the winners’ trophy of the organizer, Audi, as the most efficient participant, won the Michelin Total Performance Award in the 2014 Le Mans 24 Hours. Car #2 ranks in front of the #1 sister car in the tire manufacturer’s classification.

At 29 pit stops, Audi changed the tires of the victorious R18 e-tron quattro eleven times, which meant the winners used only twelve sets of tires, most of which had to last for several stints.

Michelin, Audi’s tire partner ever since the LMP1 program was launched, was successful at Le Mans for the 23rd time.

Audi has equaled its own record. From 2004 to 2008, the company won Le Mans five times in succession. The most recent success completes the next five in a string that has been unbroken since 2010.

The team of Reinhold Joest celebrated its 15th victory at La Sarthe. The outfit based in Germany’s Odenwald region won with Audi eleven times and twice, respectively, with a Porsche and a TWR Porsche. In addition, personnel from Joest Racing were instrumental in achieving the 1994 victory of Dauer Racing and the 2003 success of Bentley.

The victorious Audi of Marcel Fässler/André Lotterer/Benoît Tréluyer required 29 pit stops on its 5,165.391 kilometer drive. The aggregated stopping time was 58 minutes and 12.362 seconds. Never before has an Audi R18 covered such a long distance at Le Mans within 24 hours.

263,300 spectators watched the 82nd running of the Le Mans 24 Hours on location. A crowd of 245,000 attended last year’s victorious event. When Marcel Fässler/André Lotterer/Benoît Tréluyer won in 2012, 240,000 fans had turned out for the spectacle at La Sarthe.

Tom Kristensen has continued a string of personal top performances. The Dane has been on podium fourteen times in 18 runs now – his nine victories included. His car failed to finish only four events. This means that the Dane has been in one of the top three spots in any of the races he finished.

The long-tail version of the R18 e-tron quattro specifically developed for Le Mans is designed for low aerodynamic drag. This version of the hybrid sports car achieves a top speed that is up to 30 km/h higher than that of the race car for the other WEC rounds.

The safety cars were only deployed four times this year. In total, the race was neutralized for 1.38 hours. In addition, ‘slow zones’ in which the participants had to adhere to a maximum speed of 60 km/h were announced three times. In total, the ‘slow zones’ that were limited to individual track sectors amounted to 1.07 hours.

Following the most recent success, the ten Audi drivers, including reserve driver Marc Gené, have a combined tally of 20 victories in the Le Mans 24 Hours.

Audi has achieved 31 podium results at Le Mans to date. In addition to the 13 winners’ trophies achieved since 1999, the brand has clinched seven second and eleven third places.

Audi’s success marked the eighth Le Mans victory with TDI power, the third consecutive one for the e-tron quattro hybrid system and the 31st victory for a German manufacturer as well as for closed-wheel race cars and turbocharged engines.

Marcel Fässler/André Lotterer/Benoît Tréluyer decided the iconic endurance race in France in their favor for the third time in four years. Since 1923, the only other unchanged driver squads to have achieved success three times at La Sarthe were Phil Hill/Olivier Gendebien, Jacky Ickx/Derek Bell and Frank Biela/Emanuele Pirro/Tom Kristensen. No driver line-up has ever scored four victories together.

The victorious Audi trio celebrated its success together with the British race engineer Leena Gade for the third time.

For the eighth time, a squad in car #2 has won at Le Mans. Audi was previously successful with the number two car in 2008 and 2011.

38 of the 54 race cars that started the race saw the finish – an arrival rate of 70.37 percent. Two of the three Audis on the grid saw the black and white checkered flag. Only car #3 retired after becoming entangled in an accident on lap 26 through no fault of the driver’s.

This year, Le Mans saw nine race leaders, which meant the lead changed eight times. All three automobile manufacturers from the LMP1 class recorded leading laps. On lap 220, Audi took the top spot for the first time. Audi was the only marque with two different cars leading the field during parts of the race: car #1 recorded 66 leading laps and car #2 was heading the field for 73 laps.